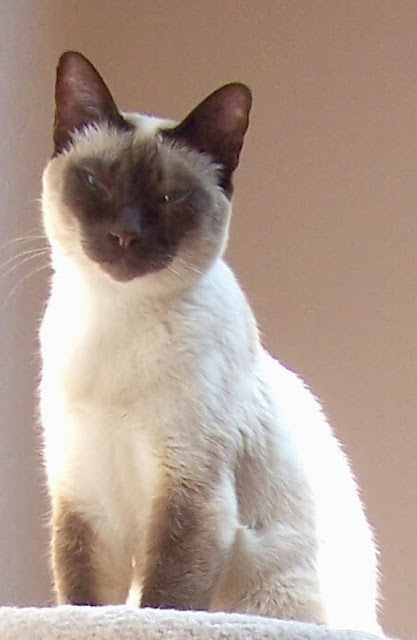 
For almost 20 years, we lived every day with Coco, a "mini-" Siamese cat whom we acquired from a family on the Peninsula shortly after she was born. This family nicknamed her "Popcorn" because she was so bouncy and energetic. Her middle name was "Rosey" as a result of her rose-tinted nose (which doesn't show in the picture).

As a kitten, she was a ball of energy and curiosity, and would not be deterred from pursuing something she had fixed her attention on. An aggressive eater, she would binge and regurgitate, almost like a little bulimic. She was very intelligent, and could usually anticipate everything before it actually happened. Whenever we returned home after a day's work or a weekend away, she invariably greeted us with cries of welcome and excited anticipation. She was a happy creature, delighted to be alive, delighted to share her life with us.

We had gotten her because we thought we wanted to breed her. First, we placed her with a professional breeder in Stockton, who put her into a cage with a large feral male who bullied and intimidated her, and the mating was unproductive.  We purchased a young male from this same breeder, thinking to have the two of them breed, again without success. Later, we learned that her uterus was defective, and she was neutered. The little male, too, turned out to have defective equipment. But we didn't regret ending up with either cat.

Coco lived gracefully into old age. At about 18, she began to develop kidney problems--a not uncommon ailment among domestic felines--and to be chronically dehydrated. She would wake up in the middle of the night demanding to be hand-watered from the sink faucet.

In her youth, she loved to be put on her little red leash, and walked out in the yard. She was inventive in play, and would chase a toy mouse around for hours. Though slight of build, she could defend her turf, and took no nonsense from the two males she shared the house with. Always affectionate, she never was temperamental, was always tractable, easy to bathe and groom, and cooperative on her visits to the vet.

We thought of Coco as the perfect family pet, and grew to regard her as a permanent and enduring fixture in our lives--the spiritual anchor and rock of stability in a world of change and jeopardy. When she became seriously ill a few months ago, we refused to accept that she might not live forever, and tried every kind of medical treatment short of dialysis to extend her life. Finally, last week, she began to fail, despite all our efforts. Rather than put her down, which we hadn't done with any of our previous cats, we opted to let her die at home. She drew her last breath on Sunday morning, without any apparent pain, and passed into heaven. We have been in mourning since. Coco is irreplaceable, and we'll never quite get used to the idea that she isn't somewhere in the house, sleeping curled up on a pillow, dreaming cat dreams.

Posted by Curtis Faville at 9:23 AM

I feel very very sad, too. When I lost Lulu twenty years ago (after almost twenty years with her, a period extending from my teens to late thirties), I cried all day.

I know how you're feeling...

My deepest sympathies to you and your family. Our kitties know us and love us just as we know and love them. Your kitty is at the Rainbow Bridge waiting for you.

There are few consoling things can be said on such an occasion. We have been through this too. Cats should live longer than men.