Phenomenology is the study of the structure of subjective experience--how we perceive the empirical world. Wittgenstein reminded us that whenever we attempt to describe anything in the world of perception, we are doing so through a system that is self-referential. Nothing that can be thought can be described without a language. Language itself has a structure, a structure which is linked to how our brains are wired. Anything we perceive through our senses may be a metaphor for the manner by which it is understood, and described.

Mark Truscott is interested in the way in which language can be used--as an aesthetic tool--to lay bare the elemental connections between perception, meaning and description. There are many ways to say this. The closer art gets to an accurate description about the relationship between sensory apprehension and verbal technique, the more closely it may resemble a linguistic exercise. Linguistics, the study of language, is difficult to describe without reference to psychology (or epistemology (how we think)), or logic (the study of the structure of meaning in language). 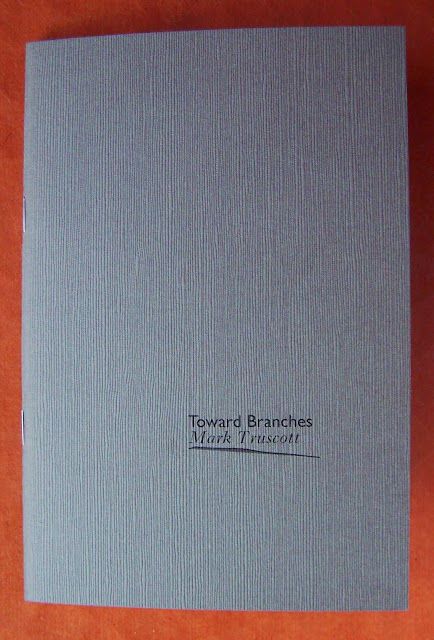 Mark Truscott is interested in all these things, and his work is a kind of short-hand, an outline of how one might approach talking about the relationship between language and being (or being-in-the-world). I share Mark's interest, and find his work an attractive instance of the exploration that all minimalist poetry represents.

Toward Branches (Toronto, 2012) is self-published (1/32 numbered copies, the whole edition, bound in stapled stiff grey wrappers, 26pp.)--which is a way of saying that the artist is controlling all aspects of the process of composition, through production, to finished material object (the book). A book in this sense has a wholeness, an entirety you rarely find in traditional publishing, where the composition, production and delivery of the material object is so fragmented by the separate influences of the process that the clarity of the initial intention becomes muddled. In Toward Branches, all the variables are valued and denoted. This frees the reader from having to see the artist's intention through a cloud of social or economic obscurity. Everything is clear and unobstructed. And clarity is a crucial precondition for the kind of artistic statement Truscott is attempting to make. 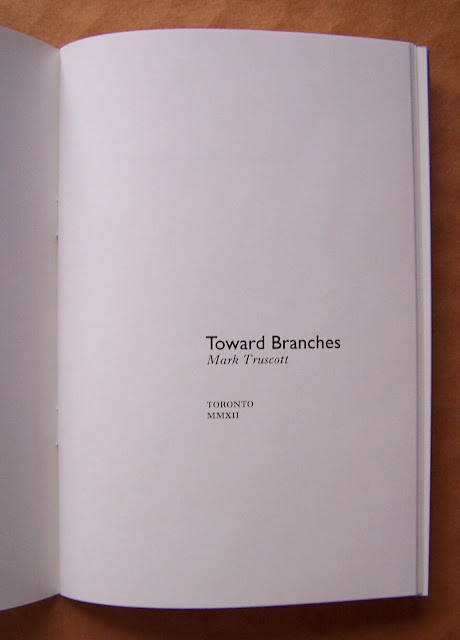 Wittgenstein's Tractatus has served as a model for much of the interesting post/post-Modern poetic experiments over the last quarter century--the building up of a system of values through the incremental enumeration of discrete logical or non-logical assertions. Such an approach has a linear accretion that can be very satisfying, or frustrating, depending upon its underlying assumptions. Creeley's Numbers (Stuttgart, Germany: Edition Domberger, 1968) was a signal effort to explicate the metaphysical implications of the prime integers.

In mathematics, a proposition is proven when the terms of the argument are brought into logical alignment. In science, proofs are built up out of axioms of accepted truth; but in art, metaphysical demonstrations may be constructed out of forms and relationships that are not logical, or empirical. Language is its own system, a set of relationships, which function according to rules and habits established through use. These rules and habits in turn form an adjunct to thinking. The mind is only an analogue for the properties of the physical world. Language is its tool, as well as its template: Mind speaking a code apprehensible according to the laws of its own accepted usage.

In Truscott's Toward Branches, the constituent parts of the book are all of a piece, a sequential progression of statements which builds towards an open-ended structure of words. We begin with a line, which is like a single vector of intention:

Truscott takes full responsibility for the implications of all the words that occur in the book. What other choice is there?

--the lost indefinite article augmenting the nature of the initial definition both as a variation on the original proposition, and as a literal branching of logic to an alternate pathway forwards into the poem.

a line near artless
[page three]

As inauspicious as this may seem, in the context of a long poem sequence--which this book is--its very dryness, resisting the rich resources of language, and the world of things, is the precision with which each increment is an augmentation of the terms of the unfolding dialectic. This is the real subject of the poem. If minimalism has any advantage over the unbridled flow of consciousness, it is in its discrete poise and restraint.

As the poem progresses, control is relinquished to the expanding field of its own limit, making a paper-cut in the white space of the bleached pulp, pressed into the smooth white plane of infinite two-dimensional space. Any poem moves into the world of its own gnosis.

A patterned/layer/of matter or/letters delineates the ambiguity of inter-relationships which the poem addresses, the interconnectivity of contexts and frames proposed. The author suppresses the autonomous (and jealous) identities of objects, in order to make finer distinctions. This is one of the functions of a certain philosophy--Logical Positivism in particular--whose preoccupation has been with the nature of analysis, or how to make a more perfect model.

Every artifact attracts its own propagating set of interpretations, and these can be traced. The burden of proof is contained inside the conundra of its means. If you want to understand a poem, you must deconstruct its underlying etiology. No one explanation can be wholly unique. Truscott's work mimics the care and attention of linguistics, but its aesthetic duty is to beauty, not science. Its strength is its obvious awareness of all these questions, not percolating with elaborations, but reductive and calm, like the grey light of a foggy morning, the subdued cooing of doves in the pre-dawn hush, sitting in the branches of our Camphor Tree.

Posted by Curtis Faville at 6:45 AM