Back in the days when The Paris Review actually represented avant garde writing, they used to commission covers by important modern or post-modern artists. For the first 34 issues, they retained a standard vertical and horizontal margin format (as shown below), which tended to limit the effect of the design. But with issue #35, they dispensed with the margin frame, a gave freer reign to the artist, and this permitted the necessary space for the design to make a purer statement, without the impinging edges. 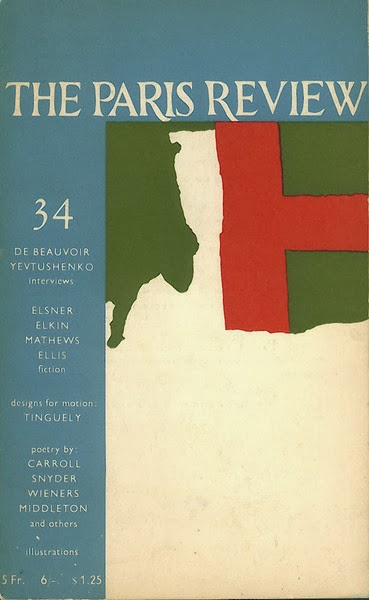 But with issue #35, they dispensed with the side margin, 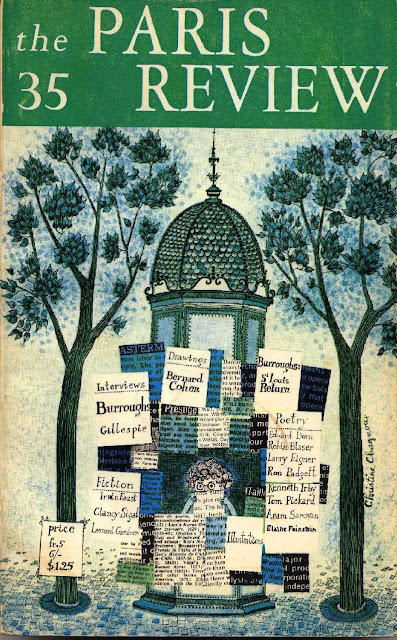 and by issue 36, the frame was eliminated altogether, giving freer reign to the artist, and permitting the space necessary to make a purer statement, without the impinging edges. 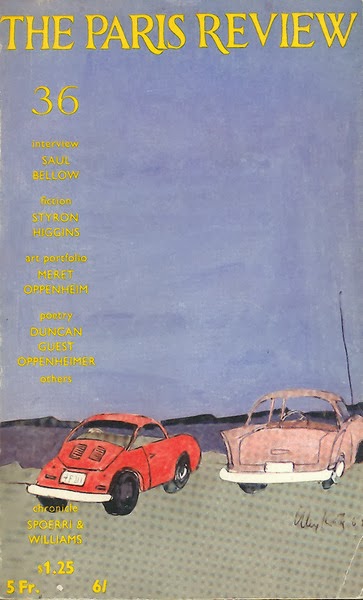 That opened up things considerably, and two issues later, this design was chosen for #38. 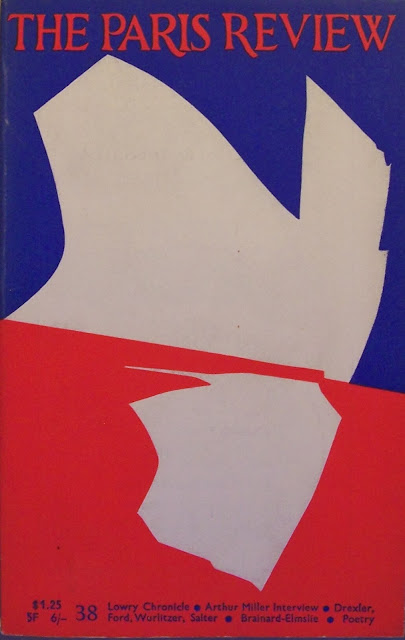 I can't say that I've ever paid much attention to the work of Jack Youngerman, the artist, but judging from the images of his work that pop up on Google images, this is a fairly representative piece.

Youngerman also works in minimalist sculpture, and he's still going strong, apparently, at age 87. The style of the PR cover seems typical, based on these images: 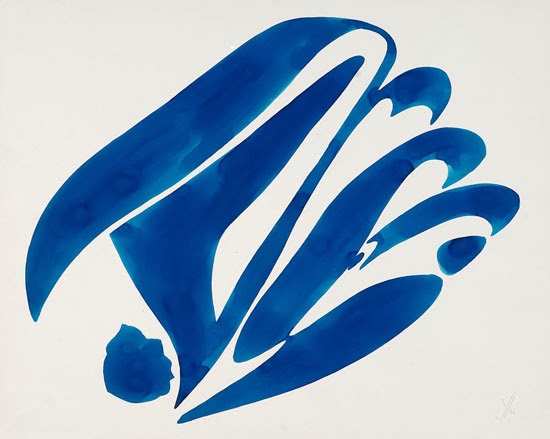 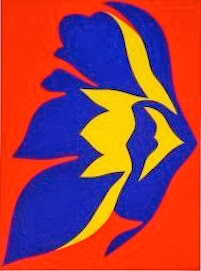 I think I would have described Youngerman as an Abstract Expressionist, just based on his age, since he began to work seriously in the 1940's, when pictorial values were beginning to be shunted aside in favor of all kinds of abstraction. But looking at these other images, I think I'd put him into a different category. As his work developed, he began to seem more like a decorative artist. These big color images remind me of late Matisse, or Arp, not Pollock, de Kooning or Motherwell. Youngerman's work seems to come after abstraction, tending towards suggestive representation.

The Paris Review design reminds me of icebergs floating in a big dark blue ocean; the red, blue and yellow piece an angel fish. Such suggestions are gratuitous, though innocent, in work like this. The flat sculptures are pleasant and would fit into any modern interior design scheme. They're just a bit like like Stella's early linear paintings, but more flamboyant and free. I think I would tire of seeing very much of it, but just one or two can be inspiring.

That's how I feel about PR #38--a real triumph of graphic design. I would buy a magazine like this just for its cover, but I wouldn't need that excuse here, since it contains a story by James Salter, and poems by Michael Benedikt, Joe Ceravolo and Peter Schjeldahl. The mag had really his its stride by the mid-1960's, and would continue to be interesting for another decade or so, before becoming vague and unfocused by the late 1970's. So much for nostalgia . . . .
Posted by Curtis Faville at 5:51 PM

Lou Reed used to publish good poems in there. There is a poem about Lou Reed's death in the Nov. 24 New Yorker. I didn't like it at all. I have no idea what to think about an amoral beast like Lou Reed, or the whole barbarian horde of the East Village. Buncha creeps. Plimpton struck me as a creep, too. Even affected an accent of some kind. I prefer William F. Buckley.

I know nothing about Lou Reed.

I lost track of popular rock music sometime in the late 1970's.

I tended not to appreciate the "grunge" balladeers"--was Reed one of these?

When Tom Clark was fired, the avant garde poetry ceased to appear in PR. From what I heard, the rumor was that the conservative Eastern Establishment forced Plimpton to change policy.