Building Castles in the Air


Putting things together, and taking them apart. So much of invention and creativity involves these very crucial processes. Seeing congruencies in nature or technology, imagining new combinations, deconstructing existing structures, natural or man-made, synthesizing new wholes out of disparate parts, altering contexts and scales.

I don't remember how it happened, but somehow I found the following aerial photo of a great array of container cargo boxes. Who knows where this might be, or what it means. 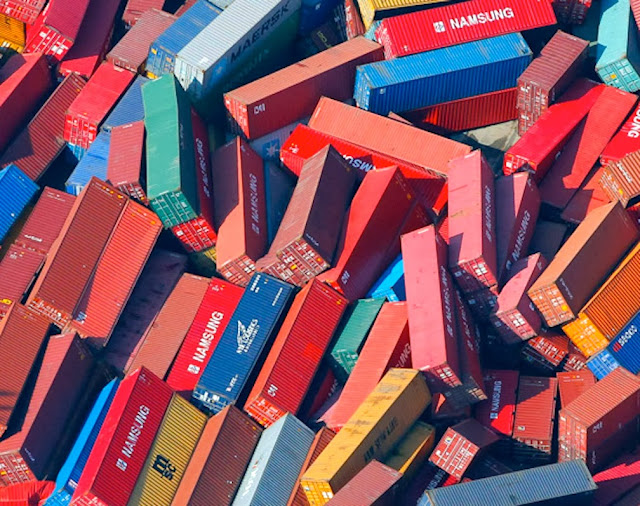 Is this just a storage site, or a dumping ground? Even when we can easily identify what something is, its purpose or meaning may be obscure. Container cargo technology devastated the dockworker trade, and the unions which represented it. Seen at this scale, the power of engineering to dwarf the hand, and move mountains, is daunting.

But the other picture is familiar and obvious. Anyone born between 1890 and 1970 would know these as Legos@, the toy building blocks which generations of kids, not just in America and Europe, but around the world, have played with or seen. Stray pieces have been swirled and scattered and lost and sprinkled across our landscape, orphans from the sets they came in. Building toys have a proud tradition: There were Froebel blocks, Tinker Toys, Erector Sets, Lincoln Logs, and dozens of other kinds. Their purpose was to entertain children, while providing a platform for their instruction in the functions of construction, creative adaptation, systems segmentation, etc. These were toys for boys, who were expected to grow up to run the world, to build things, to solve practical problems in the real world. Girls weren't expected to need to learn these lessons, since their place was in the home, bearing and raising children, keeping the house in order. 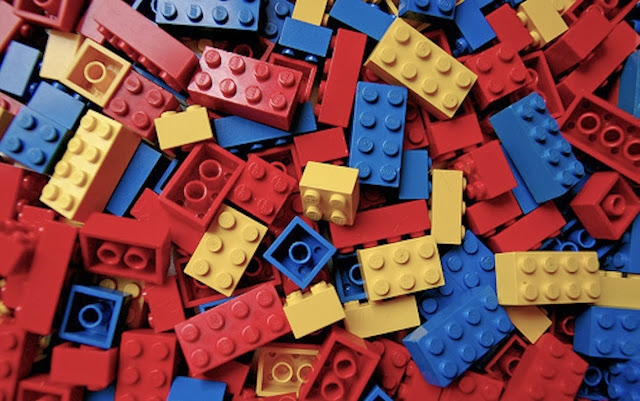 That must have changed by now. Women's liberation has freed womankind from the burdens of dependency. Girls are now encouraged to study math and science and engineering, computers and law and medicine and business administration, just like the boys. So I suppose it may be that girls are now given building toys, instead of dolls and sewing-machines and perfumes.

Each generation passes its accumulated knowledge onto the next. In civilized societies--i.e., the "West"--that has become an ambiguous function, since the technology of life has been changing with increasing rapidity over the last couple of centuries. What befits a properly educated adult? In primitive societies, the "coming-of-age" initiation is filled with foreboding and anticipation, usually involves a rite of passage, which may be terrifying or painful, but once completed, entitles one to full membership as an adult in the tribe. In Western societies, becoming an adult is more difficult, because the definition is vague, and the rituals by which it is attained are not universal. Problem solving, vanquishing obstacles, achieving agreement and compromise, leading and following, etc., are among the skills we commonly associate with successful adult performance.

The world(s) of adults, and the world(s) of children. They intersect, and overlap. Innocence and immaturity, age and maturity. Two precincts, separated by a no-man's land of uncertainty and transition. Some children abhor childhood, long for escape into adulthood. Some adults pine for their childhood, a time perfect and simple. In America, adolescence has been idolized as a kind of ideal period, when the first stirrings of sexuality, the first apprehensions of the joys of art and adventure and freedom, are experienced. In America, the notion that one can choose whatever one might become, as an adult, is presumed. You can become anything you want, given your lights and conditions. This is of course not true. It is usually as difficult to become what you're not expected to pursue, as it is to pursue what you're supposed to. Some people seem destined to become exactly who they were born to be. One of the hallmarks of our so-called classless society is that you aren't born into an identity. That, then, becomes the risk--that one may fail as easily as succeed. The responsibility for one's own identity and outcome rests officially on one's own shoulders. We value personal responsibility, while accepting the risk of failure.

Sitting on the floor, of a Christmas morning, hundreds of small plastic Lego@ pieces spread out before one, one's future life may hang in the balance. "What can you build?" What indeed?

My wife and I packed our container with some help from an international moving company in Manila more than two months ago. We were told in late November that it would arrive in Honolulu on December 3 and were given access to a tracking site with the name of the vessel. I followed the movements of the ship on a daily basis for three weeks, noting that on the 3rd of December it put into port at Singapore, after a week or two of making stops every few days at various points along the Strait of Malacca. The ship was built in Poland, owned by a German and sailed out of Singapore under a Liberian flag. The name of the ship was the Szczecin Trader, named after a shipbuilding port on the Oder River near where my German ancestors lived when they left Europe in 1856.

I suspect now that the ship had already docked once in Singapore before we were given the tracking number. The container must have been offloaded and transferred to a trans-Pacific vessel, the name of which we never learned. We received word on the 12th of December that the container had cleared customs in Honolulu and would be delivered to our door on the 18th. The local moving company spent nearly five hours unloading the container into our unit.

We had spent two months with two suitcases and a carry on apiece as the sum of our worldly possessions and suddenly we had a packing box and a half for each square meter in our unit. It took a full week to slice our way through all the cardboard, plastic tape, bubble wrap, wadded brown paper and padding used to preserve the integrity of our household goods, accumulated over more than thirty years, and ready for resituating in a space a little more than a third of the size of the space we had vacated.

We both had the swine flu by the time the major portion of our furniture, furnishings and sundry other belongings were deployed. We've still got a few square book boxes and half a dozen flat boxes with framed pictures to open, but otherwise the move is accomplished. The last time we did this drill was fifteen years ago. We were quite a bit younger then.

The photo is about a Japanese Port (if I'm correct, in Sendai Port) after the 2011 Tsunami.