Everything in America eventually turns into a corporate stock fight, for the rights to exploit something that kids once got an innocent kick out of.

When I was a boy, it seemed that there were endless things that you could collect. There were marbles, silver dollars, steel pennies, hub caps, indian arrowheads, rocks, toy cars, shells, postage stamps, Pez dispensers, records, medals. You name it, we collected it.

In 1958, I was 10, in the fifth grade, and before I knew it, I was walking down to the local drugstore to buy packages of Topps Bubblegum packs each of which contained 5 current baseball "trading cards"--with real pictures of major league players, with their stats on the reverse side. The cards were numbered, issued in "series"--successively through the Summer season.

According to the Wikipedia entry, the hardest cards to acquire over time, were those issued at the end of the "trading" season, since interest would wain and fewer sets of the final series each year were published (or sold). That sounds logical, but during the Season, that wasn't how it worked at all. 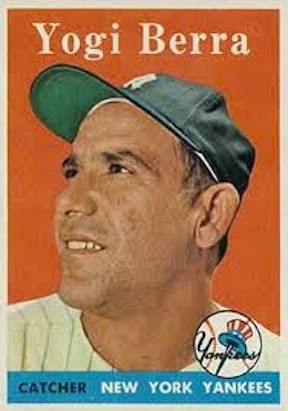 "Nostalgia isn't what it used to be," Yogi was quoted as saying, among his collection of homely chestnuts. "If you come to a fork in the road, take it."

Among the early cards issued, were Ted Williams, Willie Mays, Hank Aaron, Duke Snider, Al Kaline, Mickey Mantle. Important players issued later might become just as sought after, but because they were on the market later, they always seemed easier to find. 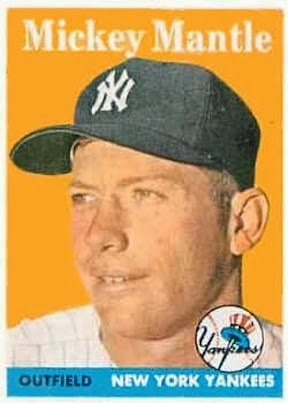 Mickey always looked like a hayseed, but his Oakie bluff was good enough for Yankee pride

I don't know how far I got with my collection by the end of the collecting year (in 1958), but by the end I probably had all but about a dozen of the toughest numbers. The San Francisco Giants came west in 1958, so though the cards all showed the statistics from the previous year (in New York), the team cards showed them as the San Francisco Giants. The Dodgers came west the same year to Los Angeles, so though their stats had been made in Brooklyn, their cards said Los Angeles Dodgers. 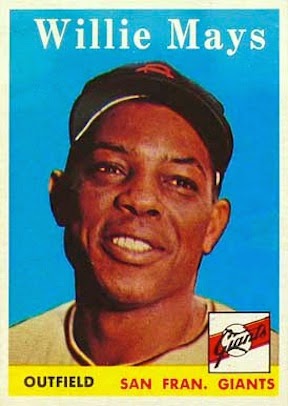 For baseball fans, there was no magic quite like Willie's special charisma and physical grace

There was keen interest in all the Dodger cards that year, as much as for the Yankees, with their loaded line-up of stars. No one knew it at the time, of course, but a little-noticed young Southpaw named Sandy Koufax would, in a few short years, ascend into the limelight as perhaps the greatest pitcher in major league history, so his card wasn't worth much despite being a low #187. A young Puerto Rican outfielder named Orlando Cepeda hadn't yet played a game in the bigs by 1957, but he soon would become the Giants proud Rookie of the Year for 1958. 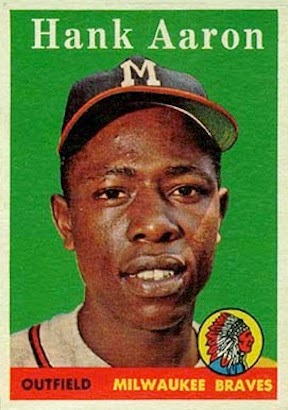 In 1958, Hank Aaron was the most complete ballplayer in the game--power, speed, average, great in the clutch; he'd go on to play another 18 years, fulfilling the promise of his youth

In 1958, the major leagues consisted of two divisions, the National and the American. There were eight teams in each league. The Pennant winners in each league played against each other in the World Series. There were no "play-offs" and no wild cards or also rans. With only 16 teams in the country, there was a lot of room in other places for minor league clubs. The talent was concentrated in these 16 franchises, not spread out and diluted as it is today. Any player who hoped to ascend to the majors, would have to be among the top 5 players in his minor league, or he wouldn't be noticed.


I remember that the players I most wanted, aside from the whole Giants team members, were the Hank Aaron, Mickey Mantle, and Yogi Berra cards. They were first, or early second series cards, and I'd missed  my chance to get them early, because I hadn't caught the bug until late June or early July of the year, well after they had gone out of print. The only way you could get those cards was by trading cards with other collectors. Once you had a tough card, you generally didn't try to acquire another one, so prying loose a card from someone who had one was nearly impossible. You had to give up something that the other collector didn't have, or a card he coveted which you didn't. I don't think I ever owned the Mantle card, but I did manage to wangle a Hank Aaron (the so-called "white lettered" version, which was easier to find than the "yellow lettered" one).

For a long time, I looked in vain for the Ed Bouchee card, which had been numbered #145. A kid I knew on my paper route claimed to own this card, and used to tease me about it. But I read now, that Ed Bouchee was charged and convicted on exposing himself to young girls, and his card was withdrawn before it was ever published, and so #145 never appeared, a permanent missing link. Poor Ed Bouchee--what a thing to be famous for.

Collecting can become an obsession, even a kind of mental disease. Stamp companies trying to lure kids into the collecting game often mentioned that FDR had been an avid stamp collector, not mentioning that it was a sedentary pastime he'd adopted after being stricken with polio and confined to a wheelchair--not something he would naturally have chosen, since he'd been an active, physical man prior to the disease. Serious collectors are occasionally described as addicts. Our obsession with physical objects, imbued with almost magical qualities that make them seem priceless possessions, is an uniquely human phenomenon, though there are apparently some birds which will "feather their nests" with bits of tin foil or colored ribbon, as if it were decoration. Blogging, of course, can become a bad habit.

The collecting bug had bitten me, in 1958, and I was hooked. Reefer Madness. I longed to have a complete run of the whole set. Then one day in the early Fall of the year, my mom and I were downtown on an errand, and she had to buy some cigarettes at a dimestore counter. What should be resting on the counter by the cash register, but a box of Topps Baseball Card packs! And not only that--these were in the waxy black wrappers, the color of the first series cartons! I begged my mom to buy me a couple packs, which she did, reluctantly. Once outside the store, I tore open the packs and was overjoyed to find the new first series cards of players I'd never been able to get in stores before. This was a stash that had lain dormant for weeks behind the counter. Realizing that this was an opportunity not to be missed, I begged and begged my mother, who eventually ended up buying the whole box for me. I don't recall now what the per-pack price was--could it have been 5 cents a pack, or as much as a quarter?--almost certainly not--else she wouldn't have popped for all of them. It was a little like finding a $50 bill on the sidewalk. You just knew that chance had favored you and that it was folly to question your luck.

As the years passed, the card collection ended up in the basement with my other childhood effects, and I would notice it whenever I went down there. After 1974, I stopped visiting home, and I have always supposed that my brother Clark, who was 13 years younger than I, must have discovered them at some point. He eventually became an avid vintage rock music record collector, so I assume he must have realized their potential, and sold them. I still have my old world stamp album--a behemoth of about 6 inches thick--which I retrieved from home in 1973. Stamps are harder to sell on the wholesale market, so I doubt they'd have any interesting value today.

In the 1970's and 1980's, the sports card memorabilia industry really got cranked up, with complete runs of sets like this going for hundreds, even thousands of dollars. The sports memorabilia auction scene has fed off the internet, evoking both rising and falling price spirals to all kinds of collectibles. The sports card market crashed in the '90's, but it may have come back up by now. It's not something I watch.

When I worked for the government, back in the early 1980's, I knew a fellow who collected baseball cards seriously. He acquired special plastic envelopes for the cards, and could quote values for all the important numbers. Later, I met a Chinese gentleman in San Francisco, who had gotten seriously into the card business, investing over $200,000 in his own edition of sports cards; but he'd gotten in just a bit too late, and had lost his shirt. Once, years later, I was at a used book sale, and someone had donated several complete boxed sets of later Topps series cards, but someone said that they were so late in the game, even complete sets weren't worth the trouble of storing or listing them for sale.

In the 1990's, I became interested in collecting rare copies of modern (post 1900) first editions. As my interested intensified, I found myself spending the kind of money you usually reserve for big necessities, like engine overhauls or a new dress suit. It didn't take long to realize that if I wanted to collect seriously, really seriously, the best way was to become a trader, instead of just a collector. The rare book dealer I knew then, told me "collecting is for dummies, Curtis, you should become a dealer. You'll see books you never imagined you'd ever see, much less own, and you'll actually have the experience of holding and studying and appreciating them, albeit temporarily." I've never had better advice in my life.

It wasn't long before I had become a serious used rare book dealer, a profession I pursue now more or less full-time (since 2001, when I retired after 27 years with the Federal Government). No matter how long you live, or how much you love what you own, you can't take it with you. I like to tell my customers that we're all "custodians" of our stuff; we're just taking care of it until the next generation(s) arrive(s) to relieve us of our abandoned dreams and burdens. 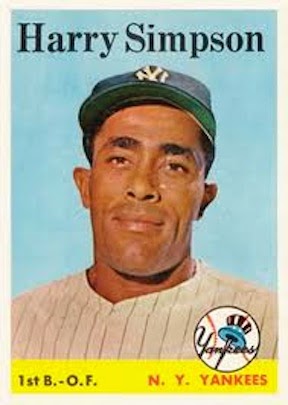 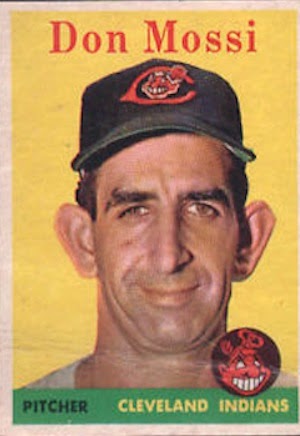