Jeopardy and the Nanny Society

On March 21st, 2015, at 6 PM in the evening, a section of seaside cliff along the Point Reyes National Seashore coast trail broke off, precipitating (a word I always remember Thornton Wilder used to describe the party of unlucky souls who perished in the foot-bridge tragedy that generates his famous narrative called The Bridge of San Luis Rey) two hikers down with the collapsing rock rubble 60 feet below. One of them died, the other was seriously injured. Signs had been posted at the trail head warning hikers not to take this route, due to a large fissure that had appeared in the cliff just a few days before. 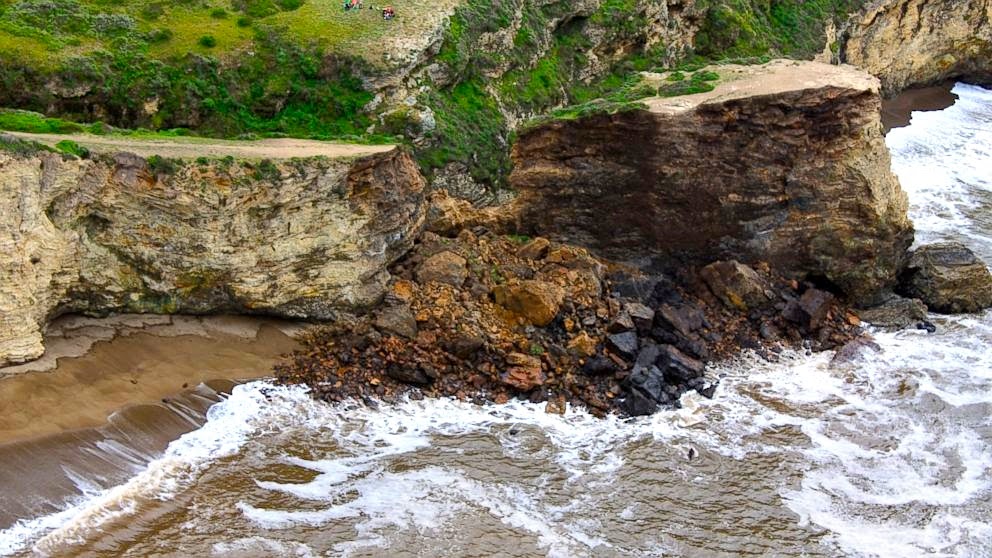 The odds of being born, according to one legend, are the same as if you were to throw a life ring on the open ocean, and at that exact moment, a blind sea tortoise poked its head through the ring. The odds of dying, on the other hand, are 100 percent. Each day in between, since it's a miracle you're alive in the first place, should be treated as a blessing. Considering the events of last week--the catastrophe at Point Reyes and the arrival of spring--it might be a good idea to dump your "should list" and do what sets you free to travel, explore, hike, bike, fish, camp, boat, or stalk and photograph wildlife. . . . There are so many warning signs when there is no immediate danger that many understand why several hundred people ignored the warnings at Point Reyes and ventured out to the bluff at Arch Rock. But then, even if you do everything right, follow every rule, your number can come up. . . . The reality is that it is a miracle, no matter what your age, that you are around . . . . spend each of your days wisely--doing what you love.

Odds-makers like to calculate what the risks are in any part of life. Life isn't a gamble, but calculating risk is only human, and many of the decisions we make in life are based on such calculations. Every day I go driving, I undertake what I regard as calculating the odds--of a child running in front of my car from a side street, say, or a cop tearing after a call at 30 miles over the speed limit, or someone cruising through a stop-sign while texting and broadsiding me. I've been in my share of accidents, none of which have been my fault (when I was driving). But we all know that we take our lives in our hands, as the saying goes, every time we go driving, especially on highways and turnpikes.

Society always tends to over-react to unexpected and unlikely tragedies. Airline crashes (like the one that just took place in Switzerland), terrorist bombings, random shootings, mountain-climbing mishaps, swimming pool drownings, mountain-lion attacks, and of course, the suicides off the Golden Gate Bridge. Inevitably, after each reported incident, we hear calls for more safety measures, more restrictive access, tighter controls, more barriers, and more elaborate rules to govern our behavior for our own good.

There are some people who seem particularly prone to advocating greater control over human behavior. Governments are always wary of the risk of being held responsible for, and therefore liable for, accidents and "preventable" acts of nature or human waywardness. Private interests are no less aware of the dangers of being held accountable. We live in a litigious world in which anyone, at the drop of a hat, is likely to sue another individual, or a company, or a government agency, for damages suffered through some supposed failure of duty or vigilance.

The idea that people must be protected from the hazards of life has evolved into a separate segment of the law, called risk assessment. Lawyers and professional sociologists advise insurance companies about how to gauge the probabilities of valid claims against policies. We try to control risk in residential real estate insurance by hiring geologists, structural engineers, arborists, fire experts, and even psychologists to provide reports about the likelihood of claims against coverage.

The idea that life is so dangerous that we must all be safe-guarded against it is a very modern notion. You might think that it's because we value human life--regard it as so precious--that we tremble at the thought of anyone suffering any injury, no matter how slight. Or that we cringe with fear at the notion that anyone--even ordinary citizens--might be responsible--just because we share in the greater implication of belonging to society--a city, a state, or a nation--for the jeopardy of any one of its members, or even visitors or tourists from some other place.

But is society really responsible for accidents that are so rare, and so unlikely, that the odds are staggeringly tiny? Odds are, according to one source, that you could fly once a day for 4 million years before succumbing to a fatal air crash. In fact, 95.7% of passengers involved in air crashes survive. Whereas, odds are one in 5000 that you may die in a car crash. Or, 1 in 3.1 million that you will be killed in a shark attack. The point of these statistics isn't to calculate risk assessment, to safeguard your pocket book, let alone your personal safety.

The underlying point is that most risk is random, and can't be controlled or managed out of existence. Refusing to ride in automobiles, or in planes, or in trains, because of safety concerns isn't completely irrational. Caution is a prudent component of the rational mind. But the notion that everyone must be ruled by a vast network of strict limits, or enclosed in a harnessing safety web,  for our own good,  is one of the popular illusions of our culture.

Reasonable people accept reasonable limits to freedom, in exchange for being held individually responsible for their own protection. If, as a pedestrian, you choose to barge into moving traffic, you're voluntarily choosing to place yourself in jeopardy. If you take a jet flight from San Francisco to New York, you're putting your safety into the hands of an airline company, its mechanics, pilots, and the airport traffic system personnel. It's a considered risk, which most accept.

Anyone walking on a cliff overlooking the ocean, accepts that there is a chance, however slim, that a part of the earth at that edge, may crumble. A large crack in the cliff's edge may be a warning sign, but such occurrences aren't predictable. Earth movements can be speculated, as earthquakes are; but it's doubtful that humankind's empirical science will ever be able accurately to foretell the odds of earthquakes or landslides.

People are often stupid, but when calculating risk, we need to remember that, as precious (and improbable) as being born is, the risk of falling victim to unlikely occurrences is inherent in life itself. We can't prevent people from doing stupid things, and we can't prevent all accidents from happening. If people want to kill themselves, or to live on the edge,  they will find a way. For the rest of us, prudent precautions make sense.

Posted by Curtis Faville at 1:45 PM