Occasionally, drawn by a nostalgic urge, or the need to go back over something I had experienced in the past, I will reread a book I had first encountered decades ago.

I had been raised in a fairly old-fashioned household, where things like sex and adult rivalry weren't ordinary subjects of conversation, at least around "the children." How much of my sex education and emotional maturity had their roots in the reading I did during my impressionable adolescent years? My surmise is that this happens a good deal more than we usually acknowledge. I grew up in the 1950's, when pornography and frank discussions of vital matters like sex weren't nearly as commonly available as they are to kids today. For one thing, the internet didn't exist. For another, the puritan ethic was alive and well then. That tended to make adolescents cautious, if not outright fearful, about exploring forbidden topics.

Which may explain why Malamud's novel made such an impression on me then. So when I decided to reread the novel last month, the first thing I recalled was the seduction scene that occurs between the protagonist, Seymour Levin, and the wife of the department head, Pauline Gilley, in a secluded forest tryst. At the time, the scene hadn't so much shocked me as stimulated my anticipation about sex, something I had no inkling of at the time.

The narrative is about a Jewish English instructor from New York who is hired to teach at a small Oregon state college near the coast. Though it wouldn't have meant much to me at the time, Malamud's own academic career had followed a path similar to that of the main character.

A roman a clef [novel with a key] is a novel about real life, thinly disguised under a facade of fiction. Even had I known the implications of the parallels between Malamud's own career, and that of his protagonist, I doubt this would have meant much to me at the time. Fiction was fiction, and though I understood intuitively that imaginary characters were built up out of parts of people that an author may have known or watched, it would not have interested me much to have known that this story--set in a small Oregon college English department--bore potentially striking resemblances to an actual group of real people. Rereading the book now, in light of my life experiences in the intervening decades, was an interesting exercise. One of Max Beerbohm's favorite conceits was caricaturing famous people (or authors) confronting themselves in their older and younger incarnations, sizing each other up from the contrasting vantages of youth and age; and that's partly what reading an important book at widely spaced intervals in your life can do: It can show you who you were at an earlier time, by reflecting your altered character in the mirror of a familiar tapestry--which you had experienced originally long ago. The story is a part of who you are, but seeing it anew, as an objective phenomenon, permits the kind of perspective which can be very revealing.

Any author may take liberties with truth, in fact he's expected, at the least, to make an effort to camouflage his portrayal of people and events whenever they come close to being exact copies of the model. In Malamud's case, taking into account what was noticed and noted by his colleagues in Corvallis at the time, he may have taken more liberties (or license) than was considered proper at the time. One account, posted by one Chester Garrison (obit), one of Malamud's colleagues (and long-time family friend) at Oregon U, provides useful insights into Malamud's character, as well as a couple of key coordinates between the narrative of the book, and Malamud's tenure there. 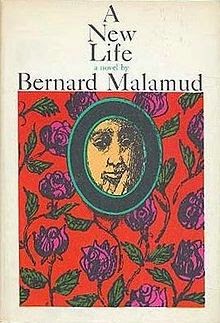 Dustwrapper of the 1st Edition

A New Life is a poetic novel, which is to say that the language is musical, and minutely probing of finely drawn shades of human sensibility and motive. Discovering that Malamud's graduate thesis had been on the poetry of Thomas Hardy was a confirming exhibit. As anyone who reads even a short story of Malamud's knows, he has an ironic, droll Yiddish lilt in his voice. No matter what he says, there is this subtle undercurrent of wry humor or bitterness, a grudging twist of dismissal or amusement. In A New Life, there are long passages in which the emotional turmoil of Sy Levin courses through countless turnings and dialectical rounds, not unlike that which occurs in the iterative ruminations of Henry James's psychological fictions. Reading this today, 50 years later, I'm struck with how profoundly personal a book this was for Malamud, as if he were working out intense inner conflicts. 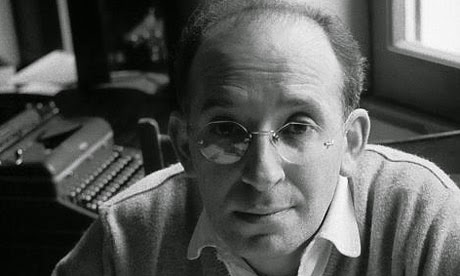 Like Seymour Levin, Malamud had come West in nearly the same scenario, though unlike Levin, Malamud was married with children (and would publish his first book, the improbable mythical baseball novel, The Natural [New York: Harcourt, Brace &; Company, 1952]), just a couple of years after arriving in Oregon. Though ostensibly the story of an outsider, a supple, subtle liberal Jew set down amidst the raw provinciality of a rural cow college, Levin is also Malamud's own imaginative alter-ego, experiencing the same emotional dislocations, amazements, seductions, and realizations his creator must have felt, coming to Oregon in 1951.

Upon his arrival, Levin is immediately thrown into the squabbles and entanglements common to any college English department. It isn't long before he embarks on an affair with the acting department head's wife, Pauline, which further complicates the political machinations involved in the election of the next department head. The man he has been hired to replace, one Leo Duffy, had been fired the year before, and had committed suicide not long afterwards. Levin, like Duffy before him, is regarded as a radical, bent on challenging the status quo, and (it turns out) Duffy had also had a brief affair with Pauline. Will Levin succeed in installing himself as the upstart new department head? How will his affair with Pauline play out?

Malamud may have equivocated about the meaning of the story. When confronted about the implications of his having portrayed real people in the department, he claimed that the story was a comic riff, but apparently there were enough obvious parallels to have inspired indignation among his colleagues. In the novel's conclusion, Levin's appointment is terminated, and he drives off into a very ambiguous sunset with Pauline and her two children, uncertain of his future, unemployed, chastened by his expulsion, and not really committed heart and soul to his new responsibilities.  This may be a too-convenient exit from a comic complexity, since it would have been just a little too pat to have him win the laurels as well as the lady. I like to think of the story as a pastoral, neither comic nor tragic in its implications.

Malamud left Oregon in the Spring of 1962, just as the novel was being published. Like Levin, he was leaving just at the moment his connection to the college was coming to a close. Malamud would go off to Bennington, where he woud remain until retirement. In essence, A New Life was Malamud's ambivalent escape from the academic dilemma he had faced in his earlier years at the college, where his "instructor's" appointment had kept from from teaching literature, even as his published works were building him a national reputation as one of America's finest writers.

There were other interesting correspondences in the narrative to events in Malamud's career at Oregon. One involved the firing of another young English instructor, whom he helped to preserve his job, doubtless a source for the Leo Duffy character in the novel. What has always intrigued me is whether or not Malamud may indeed have had some kind of relationship--real or imagined--with one of the faculty wives. Just as Levin may be a fictionalized projection of Malamud's Brooklyn Jewish self, seeking "a new life" amid the rain forests and snow-capped mountain-ranges of the far west, the other characters in the story may stand for actual figures in the real author's life there. The writing feels so private, so intimate in its details, that one can hardly avoid making such connections. Does the crisis in the hero's saga, which is played out in a single academic year, symbolize the decade of Malamud's life in Corvallis? It's possible to see the book as a sort of summarization of his life there, and perhaps even as a judgment of sorts--first as a satire on the social life of the department, and secondarily upon his own semi-mature self, isolated and inexperienced, under-appreciated, relegated to teaching bone-head English to raw-boned Oregon teenagers. But by the time of his departure, he had won a National Book Award (for The Magic Barrel [New York: Farrar Straus Cudahy, 1958], and had published two widely respected novels.

Perhaps in several ways, A New Life, published at the moment of his departure from Oregon, and his return to the East Coast (and the fame that would be his),  symbolizes a turning-point in his life, just as Levin's departure was for him. The story may seem like a half-serious comic rebuke to a world that he may have felt did not appreciate him, and not having to hang around for the inevitable curiosity and suspicions could certainly have been a liberating feeling.

Remembering the story from my earlier reading, the aspect that stands out for me, across time, is the rivalry between the department head, Gilley, and Levin, complicated by Levin's affair with the head's wife, the kind of sexual competition that is at the center of the plot. While Levin is committed to his teaching career, and to the ideals it represents to him of academic excellence and political honesty, he is drawn passionately to Pauline. He knows in his bones that he can't have it both ways, that if he chooses Pauline, he can kiss his future at the college good-bye. In Malamud's real life, he managed to extricate himself from a dead-end academic life through an act of will, single-mindedly producing works of high literary merit, while supporting his family on a modest instructor's salary. I wouldn't have known or cared about this reality behind the curtain of art as a boy, but now it offers a whole different dimension to my understanding of the relationship between life and art. I was once myself a college teacher, at the University of Iowa in the late 1960's and early '70's, trying to write while supporting my family. But my personal life was not nearly so remarkable as Malamud's.