My personal genealogical history is traced back to England (from the name Calef on my real father's side), and to Norway (Johnson on my mother's side).

I've traveled to English and Scotland and Ireland for visits, but I've never visited Scandinavia. I have a feeling I'd enjoy going there--something I may eventually do.

One striking landform of Norway is the fjords. A fjord is a deep, narrow, elongated sea or lakedrain with steep land on three sides, opening toward the sea (the mouth). Fjords were formed by glacier tongues of retreating glaciers, depositing gravel and sad along the way, forming shallow "thresholds" at or near the mouths. Fjords are thus often natural harbors.

Fjord--the word--has ancient origins--from the prehistoric Indo-European word "prtus," derived from "por" or "per," meaning "go," or "pass," or "to put over on the other side." Its basic meaning "where one fares through" also give us the words "fare" and "ferry." Thus a fording, or crossing. 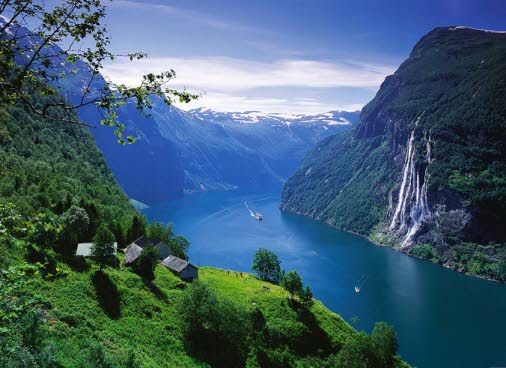 Aquavit--or akvavit--is a traditional distilled spirit produced in Scandinavia, going back to the 15th Century, the principle flavoring agent being caraway (or dill), and averages 40% alcohol. The word comes from the Latin aqua vitae ("water of life"). In Scandinavia, it is often sipped at room temperature, or used in conjunction with beer. It may be clear or slightly yellow, depending on age. Aquavit is produced in Scandinavia, but also in the U.S.

I have tried using aquavit as a mixed drink spirit, either as the goods, or as a flavoring agent, with excellent results. Here is a mix that begins with aquavit, but comes out tasting more balanced and less peculiar than you might suppose.

Shaken vigorously and served up in a pre-chilled cocktail glass.