On a Painting by Rotari 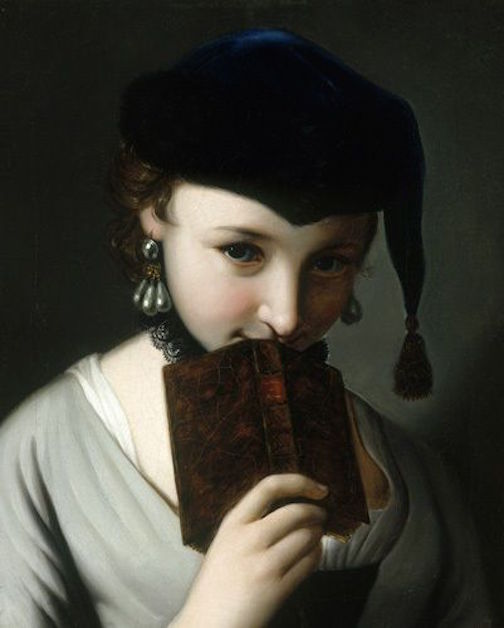 Rotari was an 18th Century court painter in Italy, Austria and Russia. The painting above is undoubtedly a minor work in the contemporary scheme of things in that time, since its subject is not royal, probably not even an important person. But by any measure, our interest in it transcends any ephemeral social or political importance it may have had to those who gazed upon it over three centuries ago.

The picture is filled with emotion, but not of the blatant, forward kind. It is about--if any work of art can be truly about anything other than itself--the coyness and timidity of private pleasure, of a promise of pleasure withheld, or a promise filled with intent. The technology of printing in Europe was already three centuries old when this was painted, so the novelty of books as something ingenious and perhaps forbidden had worn off somewhat, though the novel of the billet-doux was just coming into vogue (evidence Samuel Richardson's Pamela, or Virtue Rewarded [1740], or Clarissa, Or the History of a Young Lady [1748]. The vulnerability of the weaker sex was becoming a chief preoccupation of society in those times, and accounts of virtuous young ladies resisting or succumbing to the overtures of unscrupulous rakes and bounders was to become one of the major literary genres of literature--a tradition, indeed, which seems to be going as strong today as it ever did in the past.

Whatever we may think of the character of the young woman (or girl) in the portrait, it is clear that she is using the book as a foil, either to conceal her expression, or as a prop to illustrate her attention on the viewer. Her coyness--the expression in the eyes, and in the modesty of the gaze--suggests something of the character of the person whom we imagine her gazing at. In the narrative of event which paintings like this inspire, we are encouraged to invent a relationship with an invisible, unnamed and silent other--presumably a man--though in our present politically correct climate, that might no longer be appropriate.

Does her expression, and the attitude of her body, suggest surrender, or invitation, or timidity? Do timidity and invitation co-exist in the same look? If this picture is any measure, they certainly can! It's the ambiguity, of course, which animates our interest, allowing ourselves to read different versions of different situations according to our mood.

The girl is well-dressed, but not extravagant. Her outfit is grey, but the hat and the earrings suggest a piquancy beyond the quotidian. Her skin is smooth, and she seems pampered.

Since the major prop is the book, we're expected to wonder what it's about. Is it a book of verses, a book of proverbs (some Biblical, some not), or a novella for proper young ladies? Our tendency is to think dirty, given the mischievousness of the mouth. We could almost say, with justice, that the artist's intent was not unlike that usually attributed to Da Vinci in his Mona Lisa. This young lady's expression seems neither quite inviting, nor quite curious. She's guarded, protecting her vertue, but she may also be risking it. We can't quite know. The viewer's morality is animated upon its own currents, neither confirmed nor denied by the content of the scene.

The joining together of reader and book creates a dialectic between what we may conjure of the story, and the open-mindedness of time. The further away from the execution of the work we are, the more remote our apprehension of its initial impression. She studies us with the same fascination and curiosity with which we study her, as if we were straining against the limits of time to communicate something that was hidden on purpose.

The divine secret any woman may imply in her behavior or speech, is the unexplained possibility contained in her potential. The great mating game is reincarnated, generation after generation, in the grand cornucopia of fertility that discovers the future, while confirming ancient truths. That we can write them down, as well as making scenes and pictures of them, suggests too the astonishing magic of representation, of the tapestry of the imaginary. Art and behavior intertwining like lovers or disputatious theologians, to arrive at a resolution that sings.

Posted by Curtis Faville at 1:45 PM

I like the candor with which you describe the painting, but after all, everyone sees what they want to see. And what I see is a pretty young girl but not very graceful. She has a cleft lip that cleverly conceals with the book in her hand. Her lace choker conceals the lack of neck and a possible deformation in the back.
(^人<)〜☆