Reviewing a juvenile title affords me the opportunity to hold forth on a variety of subjects which I don't often discuss here, though I have written at length about three other classic texts, Peter Rabbit by Beatrix Potter, and Calico, The Wonder Horse, or The Saga of Stewy Stinker by Virginia Lee Burton, and Stuart Little by E.B. White.

I discovered The Alphabet [by Monique Felix, Makanto, Minnesota: Creative Editions, 1993], rummaging around in a dumpster at the local county recycling center, and saved it from pulping. This is often how much of our very disposable cultural detritus ends up, dismantled or crunched into consistent fragments or material for landfills, or repurposed into new product. There's a certain delight in salvaging items that have been thoughtlessly discarded by others.

Normally, I'm not much interested in books for children. They're produced at an incredible rate, and most of them quickly fall off the retail inventory lists and are relegated to oblivion, ripped and torn and scribbled in and damp stained and generally abused by children, who often seem more interested in abusing them than in reading them, though a well-used book is often proof that it was appreciated instead of being neglected.

Children's books are often the first reading experience that people have of literature in their lives. It's unusual for a child to learn how to read well enough at an early age to be able to read real books, without first transitioning from picture-books, letter blocks, or pop-up books. Learning to read often occurs via elementary texts, designed both to usher the child-mind into grammar and spelling while inculcating moral lessons through crude juxtapositions and simple narratives.

Children's books, like all books, are a reflection of the culture of their time. When I was a boy, children's books had lately entered a new phase. After World War II, the elaborately illustrated books of the early 20th Century had begun to give way to a more visually oriented style, one less dependent upon poetry and plot, and more focused on the power of visual variation. This was partly the influence of cartoons and billboards, but also a response to the more modern notions of how children first learn and orient themselves to experience. Winnie-the-Pooh or Peter Rabbit gave way to Dr. Seuss.

Typically, books designed for children at the pre-school level contain almost no language at all--just pictures arranged in a sequence. These mostly wordless texts are simply designed to orient the child's mind, to regarding a book as an amusement, an object of curiosity. Since children lack a sense of duty and self-improvement, it makes sense to present reading (or the pre-literate pantomime of narrative) as a game or recreation, instead of something that must be done as a command. The strategy of camouflaging pedagogy through seductive persiflage is the classical pathway into the child-mind; and most children quickly pick this up, often becoming suspicious and reluctant to be condescended to and manipulated in this way. 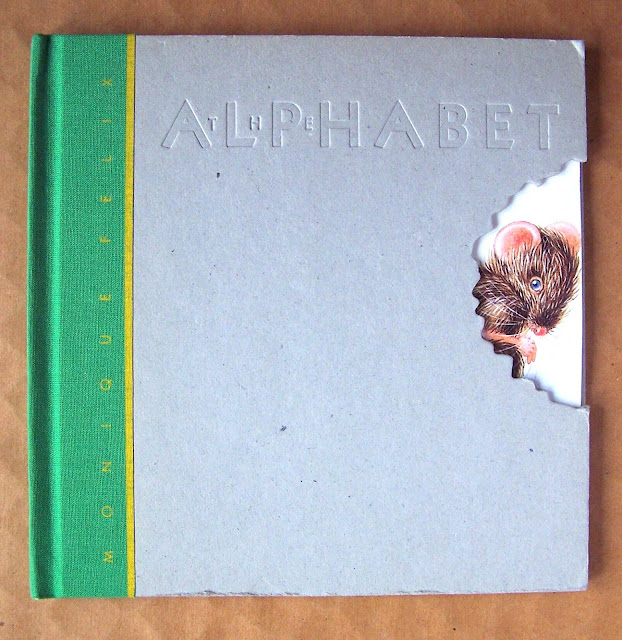 There isn't much information I could find on the web about Monique Felix. According to one site, she's a Swiss artist who studied graphic arts at l'Ecole des Arts Appliqués in Lausanne, who has illustrated more than 40 children's books, including several "Mouse Books" in the series, and won honors such as the Octagon Prize from the International Center of Children's Literature in France. Making a child's book based purely on pictures is not a new idea. But making a children's book in which the plot involves the discovery and investigation of the alphabet is somewhat unusual.

This one is based on the idea that a mouse (or two mice) literally find letters of the alphabet by chewing into the paper of a book, rummaging around and pulling out torn fragments with separate letters printed on them, then innocently playing with these torn letter fragments, trying to make sense of them as pure symbolic abstractions. 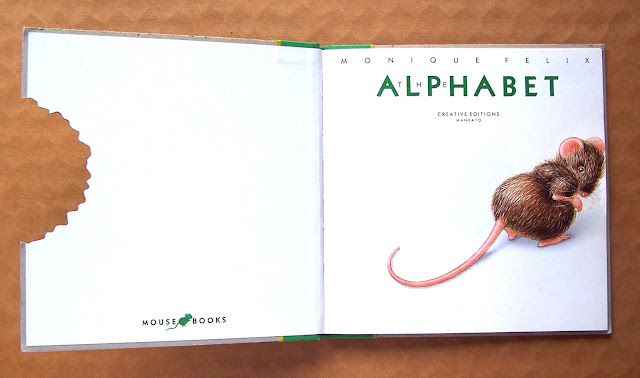 We see immediately that the front cover has been chewed. The book itself has been in a sense "consumed" deliberately, perhaps mischievously, by a hairy mouse who peeks back at us from the eaten portion of the board. At the outset, we see the physical book as both the ground of action and the raw matter out of which the sequence of events will occur. The book suffers to be the physical world in which mice live, play and behave. The book isn't just a medium upon which the panels or frames are laid out; it is a physical object, inside the narrative. 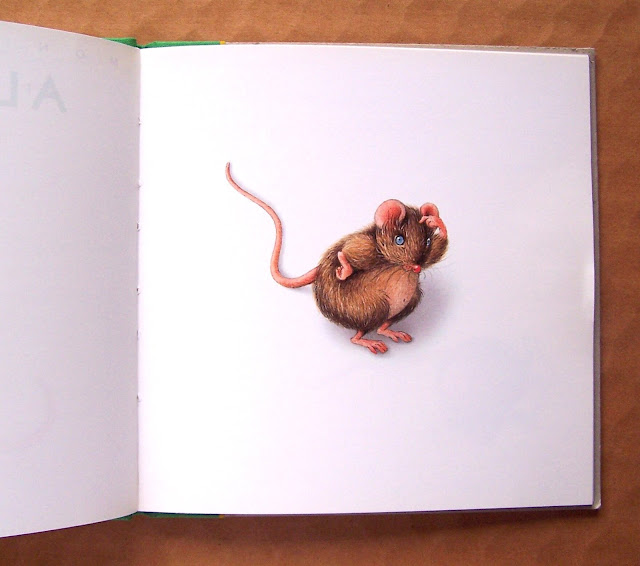 The mouse doesn't say anything, and nothing is said about it. It simply scratches its head as we discover on the second page. What's going to happen? We don't know yet. 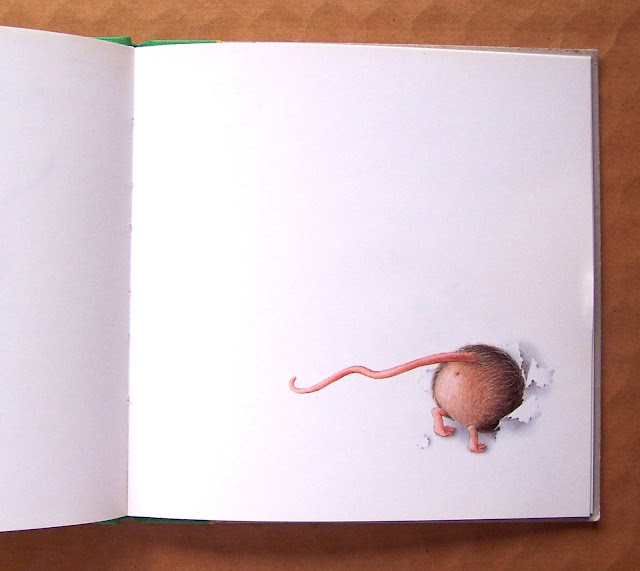 Then, on the next page, we see the mouse tunneling or chewing its way into the very paper layers, disappearing-- 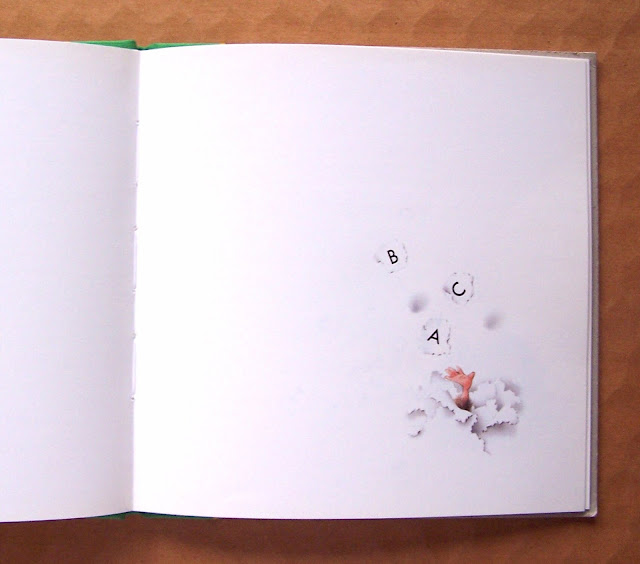 --into the cellulose, and throwing out fragments of chewed paper, each with a letter printed on it. It is as if the letters exist in the paper, in the stuff of the pulp, and the mouse is discovering these mysterious templates simply through a kind of mad investigation, the way a dog will instinctively dig for things in the dirt. (Rodents do in fact behave just this way, digging or scratching their way into places, in search of food, or shelter. It's completely in character.) 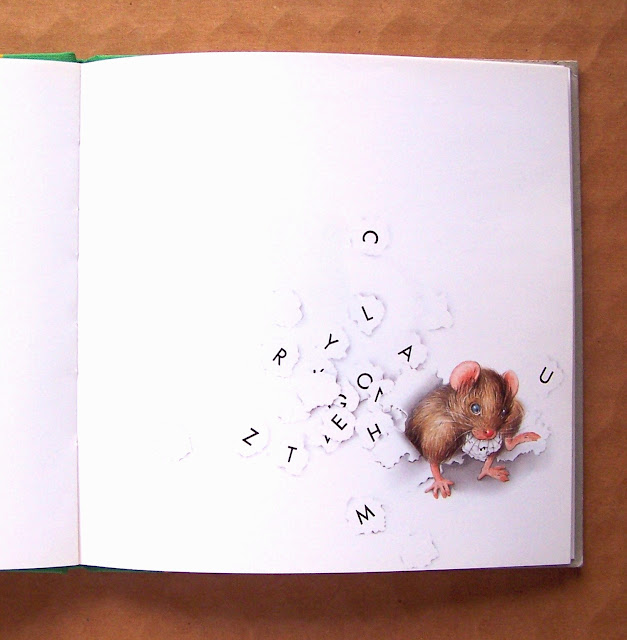 As this rummaging continues, we discover that another mouse is conducting the same curious search, and has tunneled its way out through the same entry hole the first mouse has opened. 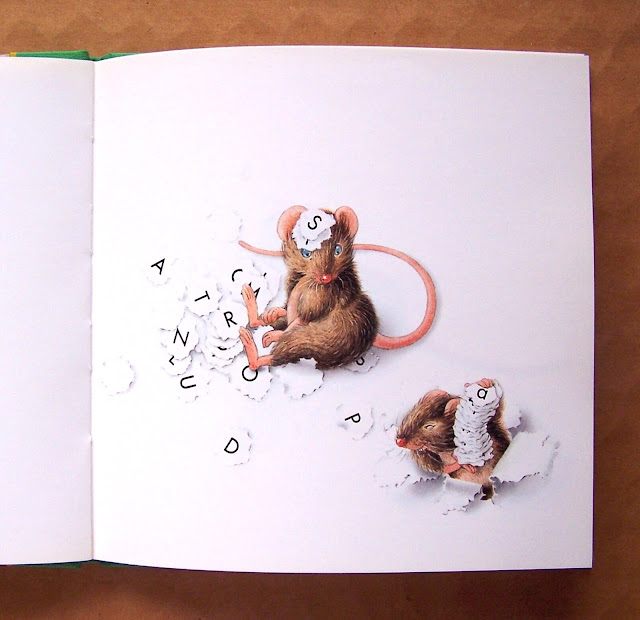 The two mice begin to collect the letter fragments, and to associate them according to various schemes. 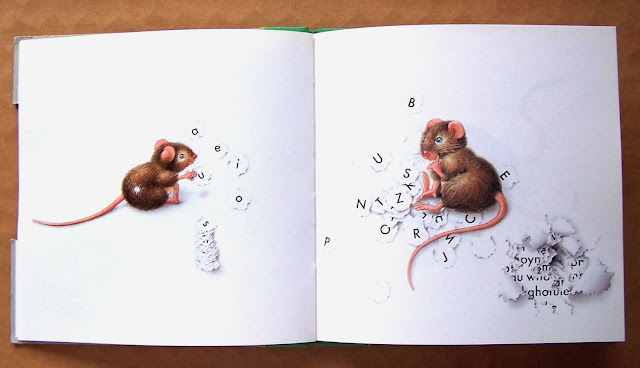 The smaller mouse seems to have figured out that vowel sounds belong together, though how it could have done this remains mysterious. At this point, the mice seem only delighted with the letters, as if they were some kind of original toy(s). They begin to throw the fragments in the air, jumping with uninhibited joy and abandon. 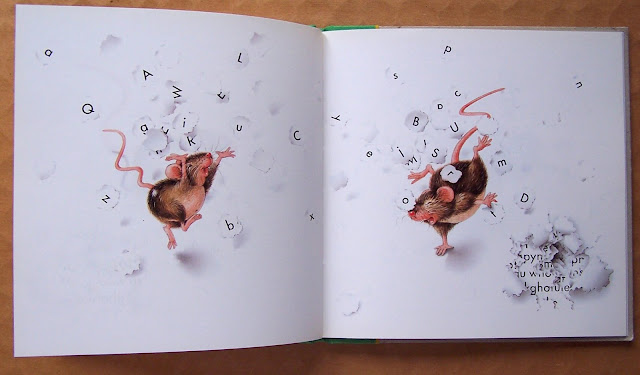 By this time, we would probably have noticed that beneath the first layer of pages there appears to be an actual printed text, though the specific words can't be deduced. This layering of perceived matter, just beneath the surface, makes us wonder how the random letters which the mice have torn out of the stuff of the pages relate to the information contained inside. 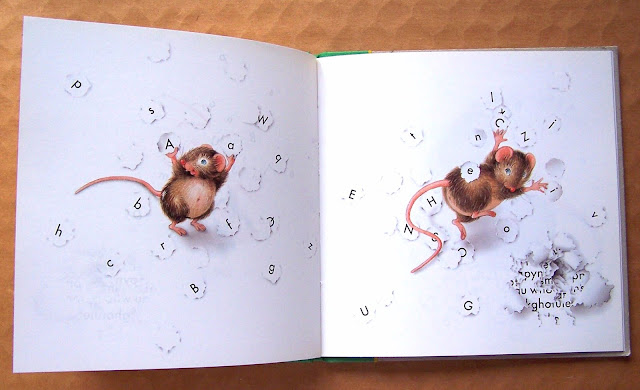 The letters function as both playthings which the innocent mice have discovered by accident, as well as keys to the tantalizing message which exists under the surface of the paper. Metaphorically, the paper (the book) has become a kind of raw material inside of which language exists, to be mined and repurposed as needed. 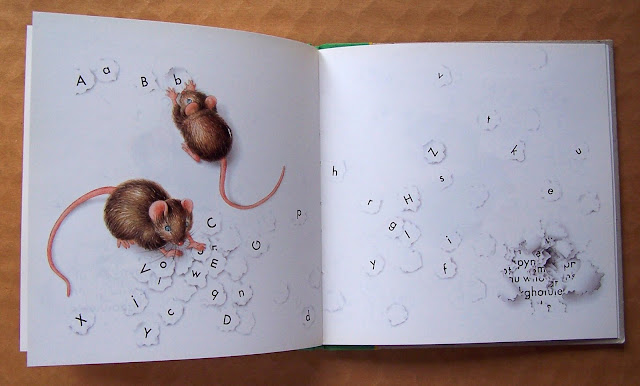 As the game proceeds, the mice begin to see congruences and relationships, joining capital and lower-case letters together, all in the spirit of casual play. 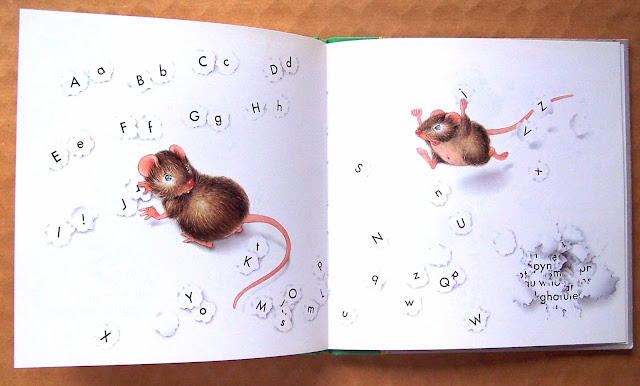 Though we have no idea how they do it, the mice begin to put the letters in their traditional order, beginning with A. Apparently, these mice know more than we thought they did at the beginning. 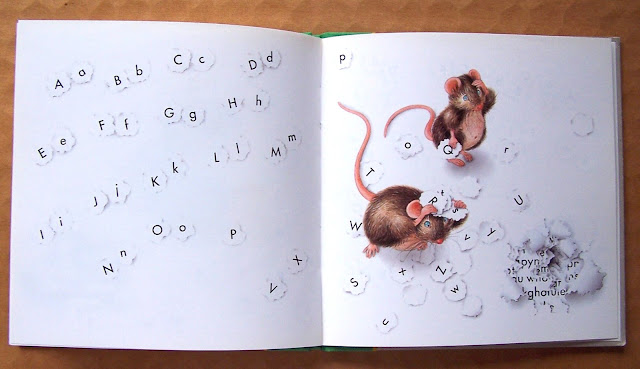 We may have believed initially that the mice couldn't have known about the meaning of the letters of the alphabet, but the unfolding of their game indicates that they either invented the relationships they are constructing, or had to have known about it before-hand. 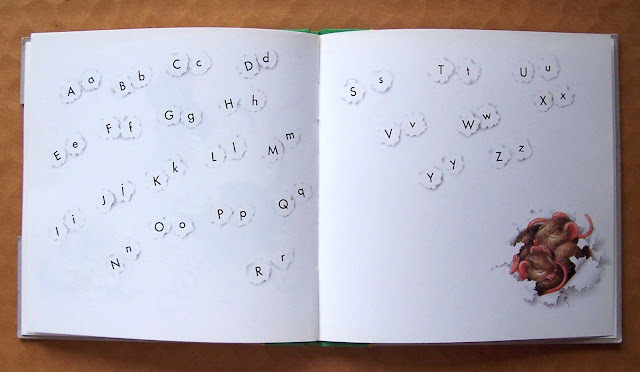 Having arranged the letters in their proper order, they now decide to take a nap, snuggling up together inside the cavity of torn paper they created by their digging. The book concludes with three blank torn fragments placed on the last leaf. 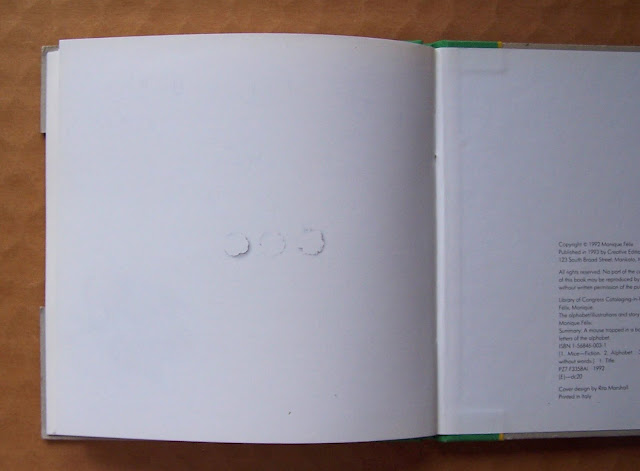 What would an immature mind think about this sequence? What is the underlying message? What does the book seek to accomplish? Does it work?

There have been some interesting developments within the field of what is variously called "concrete poetry" or "visual poetry"--as sub-genres of modern experimental poetry--over the last half century. Over the last 20 years, "graphic" literature, as a bastard child of the comic strip, has morphed into a major new formal category, with a large new audience. Children's literature, and advertising art, have both progressed simultaneously, along with these other trends. A book such as The Alphabet (which happens to be the title of post-Modern poet Ron Silliman's epic poem), seems to me to owe something to all these divergent creative areas.

The unification of content (narrative) with material text (physical book, pages, letters etc.) here is very wittily explored through a metaphorical interaction between an animal figure, and the book as a mechanical means of transmission. There is nothing new about telling stories about animals, even through the eyes and imagined minds of animals, as stand-ins for human protagonists or characters. What is new, here, is the penetration of the medium (page) by a character, boring through the metaphysical page to discover the verbal content concealed beneath the paper. The mice perform this exploration on their own, as ambassadors between the world of our human attention and the hidden world of print (language, meaning, content). The sphere or universe of language exists inside books as a kind of parallel world, complete unto itself, entire, and endless. The world of print is accessed via printed letters or paper surfaces.

Ordinarily accessing this world is usually regarded as a passive interaction--we simply read the words printed, and perceive their meaning and absorb their message through recognition and confirmation. But to the immature mind, unfamiliar with the universe of print, the idea that letters (and words) exist only (or most routinely) inside books is really a novel idea. A child will recognize a mouse, and understand the mouse as a creature which burrows, looking for something, or trying to hide. Carrying this identification further, the mice become children, or child-like, as they play with the objects they have dug up. This playful aspect is like a celebration of the discovery, or the invention, of language itself. Though no words are formed by the mice, they clearly understand that the letters mean something, and they discover (or make) an order, which happens to be the ordered Western alphabet we're familiar with.

A child might wonder, naturally, what's on the other side of the page, where the mice have been burrowing. What's under there? There must be words there. Maybe the mice are tearing up the words into their constituent parts, and throwing the fragments around, just to see what will happen? Pieces, torn-up bits and segments and particles of words.

Looking at language this way is a way of imagining the different methods by which letters, words, and writing surfaces may be conceived. If a child thinks of language as a realm on the other side of the surface of reality, a layer of something between him and sense or meaning, he may be moved to explore language, instead of merely inculcating it with rote obedience. It may be possible to see language itself (which is a wholly created artifact of human ingenuity), as a thing, to be studied and conjured and manipulated and heaped up into startlingly new structures and forms.
Posted by Curtis Faville at 6:38 PM