Growth - Who Needs It?


In yesterday's San Francisco Chronicle, the lead Editorial was devoted to California Governor Jerrys Brown's proposal to "streamline the approval process for certain kinds of new housing development." His plan "would make it easier and faster to build new housing in California . . . [and] would ease [my emphasis] the state housing crisis." (Predictably, the editorial praised Brown for his practicality and good sense.)

The so-called "housing crisis" is a well-identified phenomenon. It occurs whenever there are more people looking for a place to live, than there are places to live, in a given region. One of the consequences of rapid growth, is housing shortages. Its manifestations are various: Rising prices for homes, rentals, and also homelessness. It affects society at all levels.

In California, we've been dealing with growth for over a century and a half. Indeed, "growth" has become the sacred cow, the holy grail, the third rail, the untouchable concept. Like "diversity," it's become politically dangerous to address, even to mention. Questioning the wisdom of uncontrolled, chaotic "growth" has become as politically incorrect as questioning the value of "multi-cultural diversity." 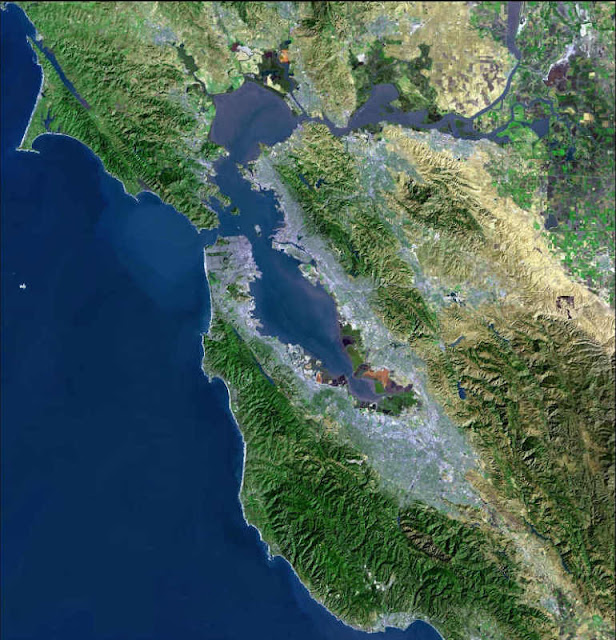 Who benefits from growth, and what are the relative advantages or disadvantages of buying in to the campaigns for future growth?

On the Eastern Seaboard, or in the Midwest, "mature" settlement has largely moderated, except in Florida. But in the Greater West, we're still experiencing the "open range" mentality, with constant calls for expansion and encroachment, upgrades and enhancements. We're admonished for not building and adding-on and accommodating further additional growth.

After a century and a half of this, we've become inured to the message. Most people don't even question the need for growth, the ever-demanding and insistent cry for "more!" Always more: More people, more roads and freeways, more schools, more police, more sewage treatment, more water, more parks, more jobs--it almost seems at times that it doesn't matter what it is, if it's "more" then we should need it.

But more growth has consequences. More growth means more government, more crowding, more noise, more pollution, more ecological devastation, and--over time--higher prices for everything, as well as shortages of some things that are finite, limited, or irreplaceable. Politicians, contractors, developers, entrepreneurs, and minority advocates all love growth, because it expands their territory, and lines their pockets.

I once had a friend who said, "everyone wants to live in California," and it's true. There's an overwhelming urge to migrate to the Golden State. We have space, good weather, and relative prosperity. 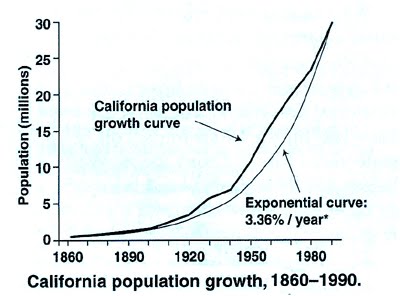 The debate over uncontrolled growth in California will continue, and we can expect to hear the same tired arguments trotted out with predictable passion and persistence, in favor of more housing, more transportation infrastructure, more jobs, more, more, more, more.

But the plain and obvious fact is that California has become--is, in fact, already--a mature region, occupied, filled-up, full. The high price of housing, and the scarce rental market, are symptoms of a disease, the disease of excess growth, and excess population. Ironically, the very things which people think they'll enjoy once they migrate here, are destroyed by this process.

We've all heard about the "flight to the suburbs" which occurred after World War II. There's also the flight to new developing regions, such as the Southwest, where suburban sprawl has been spreading like wildfire. 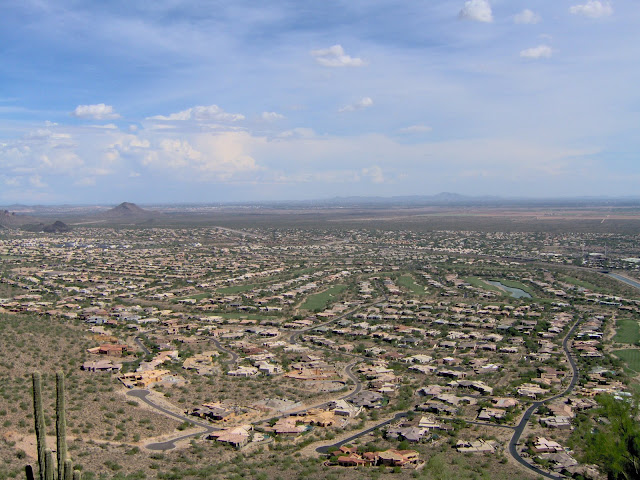 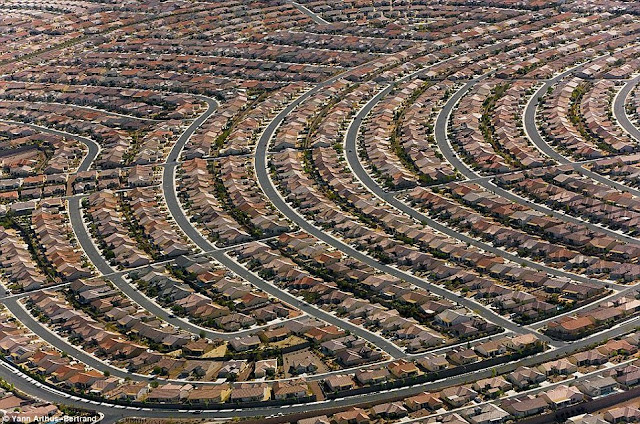 The plain and obvious fact about our regional population abstract is that quality of life is compromised whenever "growth" is pursued and designed without regard for the real consequences.

We know that the earth isn't--never was, really--just a playground for human exploitation. There may be no inherent ethical quality about ecological balance, of moderate habitation; but we know what the consequences are when a species explodes. Our instincts tell us that birth is good, that the pursuit of happiness is a human "right" and that democracy is about letting people chase their dreams. But our dreams cannot dictate how we approach common sense problems in the real world.

How crowded do we want our cities to be? How much suburban growth is "enough"? How much blacktop and concrete do we want to spread over the earth? How much natural resource can we justify exploiting for our own convenience? How many species must be sacrificed to extinction to feed our bottomless rapacity?

Jerry Brown says he wants to "ease" the housing crisis by making it more easy to build new houses and apartments. He wants to "include" "affordable" housing in the equation. How noble.

The bottom line is that as housing prices and scarcity rise, the desirability of migration declines. That arithmetic is easy to understand. We can "encourage" means by which the continuing influx of newcomers can be "accommodated," or we can celebrate the arrival of limits and barriers which moderate growth.

Growth can be a very bad thing, and trying to facilitate additional growth by "helping" the housing market isn't a smart response to the problem. The intelligent response is to acknowledge the underlying causes of "shortages" and address the causes, not the symptoms. The cause of high prices and scarcity is growth itself, not some logistical problem with permits or environmental obstructionists. Because those too are symptoms--symptoms of the outer limits of our tolerance, and the region's natural holding capacity. Our recent "drought"--which may have been brought on by global warming--is another symptom of the finite limits of the region. There's no reason to think that short-term, short-sighted "fixes" will ultimately solve the problems of excess growth.

Jerry Brown, who once stood for reasonable intelligent public policy, now advocates unlimited growth. Speed trains along our coast, more "canals" to divert water, and now, streamlined housing construction. He no longer questions the growth paradigm. He says he wants to address global warming, but his solutions actually will exacerbate the problem, by directly stimulating the underlying causes of climate change.

He's been body-snatched, and now marches to the old music.

Posted by Curtis Faville at 9:16 AM