Fair warning here: I have never been a member of the Sierra Club, and I have never spent time supporting any environmental protection organization, though I have occasionally given money to support them. Some will always accuse you of not putting your time and money where your mouth is, but participating in a political debate doesn't require that one must have been involved in something to have an opinion about it.

From an early age, I was taught to respect nature, and to view with suspicion and disdain any attempt to compromise the health of the natural environment through resource exploitation or unrestrained human expansion. Our family took camping trips, where we hiked and fished, frequently in National or State Parks in California. Later when we were raising our family, we took trips to Montana, Idaho, Arizona, New Mexico, Colorado and Wyoming.

I tacitly accepted the value and purpose of nature reserves for public appreciation, though I later came to be somewhat disillusioned about how those reserves were managed and maintained by the agencies and services empowered to run them. Later still, I came to understand more about the history of the American environmental movement, and the various continuing disputes regarding its mission and strategies.

The core purpose of nature reserves it to preserve them against development, environmental degradation, and to facilitate access without compromising their values. There are many kinds of appreciation of nature. Most people are not interested in "roughing it" in nature, and would be incapable of doing so. But most people have also come to understand that the environment is a whole condition, interconnected and indivisible, which must be viewed in its totality. Though most people in the modern world live "inside" civilization--in cities and precincts that are not natural, but artificial--they do accept and acknowledge that our connection to the whole of the planet's systems is a fact. We can't separate ourselves from nature, and pretend that it (nature) is something "out there" which we can exploit and visit and treat as a discrete entity. Philosophically, this suggests that whatever we do "to" nature we also "do" to ourselves, that use or misuse of the environment affects everything else, including all the land and water, and the creatures who occupy it (including humans).

Human civilization is not static. It has evolved over time, through movement and development and struggle. The earth has evolved into a collection of nations, or nation-states, each of which dictates to a greater or lesser extent, what happens within its boundaries, and to and among its people. This is a sovereignty that is generally respected, but frequently violated. The history of civilization over the past two millennia is the record of conflict, shifting boundaries,  imbalances, oppressions, and instabilities. But the notion of national sovereignties living peacefully, in cooperation, is a persistently expressed goal. We pay lip service to that principle, though we seldom live up to it.

What seems clear is that in disputes involving environmental preservation, national sovereignty holds sway. One country cannot dictate to another country, what its politics should be with respect to environmental practice, human habitation and economic development. Each nation is restricted by this principle to the affairs and laws that apply within its own boundaries. As much, for instance, as we would like Brazil to stop burning its rain forests, or China from damming its rivers, we don't have the authority to force them to do so.

This is another way of saying that we only can have control over that which belongs within our jurisdiction. As long as we live in a world of nations, we're largely restricted to focusing on conditions within our own territory. If we wish to apply the principles of environmental balance, or piecemeal environmental preservation, we're limited to our own borders. 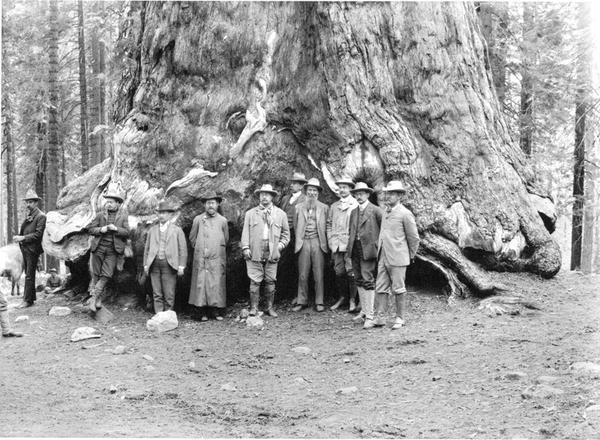 Yesterday, Sierra Club Executive Director Michael Brune issued a press release, "Pulling Down Our Monuments" in which he outlined the club's new position with respect to its founder John Muir. Brune accused Muir of being "racist". The proof he gives of this assertion is that he "maintained friendships with people like Henry Fairfield Osborn, who worked for . . . the conservation of the white race . . . [and] helped found the American Eugenics Society in the years after Muir's death." He says that Muir "made derogatory comments about Black people and indigenous peoples . . . [which] continue to hurt and alienate indigenous people and people of color who come into contact with the Sierra Club."

Has there ever been an outcry in the Media or from private citizens about the racist nature of The Sierra Club? If there were, I've never heard of them. Was the Sierra Club formed as an "white supremacist" organization, like the Ku Klux Klan, to enforce bigotry and oppression of minorities? On the contrary, the Club was created to foster protection of nature, and to encourage its appreciation through sponsored visitation and appreciation. The Sierra Club, though highly political in its operations--through its attempts to influence and direct legislation and rulings favorable to its environmental mandate--was not created to foster social justice or racial equality.

One could make an argument that any organization which has a high profile, and carries a charter that sets up social and economic goals, would need to conduct itself in a free and open manner, not making decisions and choices that reflect undemocratic sentiments. That's what you might expect.

But that is not to suggest that it should alter its mission to make itself an advocate or player in legal disputes surrounding race or ethnic identities. Why should it be necessary to demonize the founding members of an organization, in order the suit the political vagaries of various pressure-groups which want to penalize and hijack the organization for their own purposes, which have little or nothing to do with environmental protection?

Does it help the environment in the Southwest to allow unbridled illegal immigration from Central and South America? Who benefits if millions of such "refugees" stream northward, straining the limits of our resources to accommodate them? Are we to set up a choice between "humanitarian" concern for the poor of Third World nations against the environmental health of our own country? Can the Sierra Club solve the inequities of racism by dethroning its founder?

The attempt to accommodate political pressure groups by adopting internally embarrassing or destructive policies is a phenomenon we're seeing across the board right now. Some years ago, there occurred a schism within the Sierra Club, when its then head David Brower, who felt the club needed to take strong stands against extractive industry, population growth and uncontrolled immigration, left the organization to found a new group called Friends of the Earth. Brower felt that too many concessions had been made to industry. The Glen Canyon Dam and the Diablo Canyon Nuclear Plant both happened during his tenure. Clearly, the club had not succeeded in its core mission to protect these important natural places.

Some would argue that Brower represented a liberal revolution within the environmental movement, a radical departure. But Brower's version of the club's mission was closer to its original mandate, than what the club had become by 2000.

Within the context of the shifting definitions of environmental protection, Brune's position appears, once again, ironically, to be a hard left turn, not toward more commitment to the environmental commitments, but rather to political correctness. Whereas the club once struggled to find a political balance between hard-line and compromise with respect to the environmental struggle, it now attempts to repudiate its first founders, and will "Pending approval from our board . . . shift $5 million from our budget over the next year -- and more in the years to come -- to make long-overdue investments in our staff of color and our . . . racial justice work." In other words, the Sierra Club will spend some of its money on minority outreach and hiring, and diversity training.

In all honesty, I have a hard time understanding how this can benefit the environment.