The California Delta - Focus of the Resource Debate 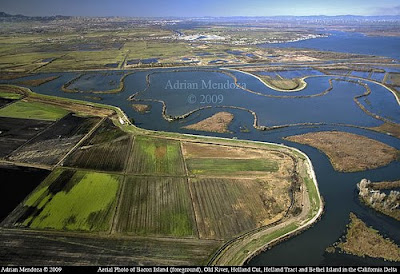 The California Delta has been the focus of the debate over water usage in the state since early in the last century. The American West, in particular the Southwest, is relatively water-poor when compared with other parts of the country. As the settlement of the West proceeded in the 20th Century, water rights and access became hotly debated topics. Big agriculture was able to broker advantageous agreements. As the urban and suburban population centers grew, their political clout enabled them to compete for those same sources of water.

The Los Angeles Basin is a desert. Without water drawn from the Southeastern Sierra, and the Colorado River system, it would wither away. Presently, a significant amount of water is also diverted from the Sacramento River system to L.A. The Delta, which is a fresh-water tideland fed by the Sacramento River to its outlet into San Francisco Bay, has suffered a number of ecological problems as a result of water diversions, pollution, and questionable development.
It is clear that minimum flows are required to keep the Delta system from collapsing. With Global Warming progressing as predicted, we can expect seasonal flows from all Sierra Rivers to decline over the coming decades.
At the same time, California's population growth has been allowed to proceed unchecked by any environmental safeguards. We are now at a crossroads: Growth advocates (and those who think of themselves as "compromisers") tell us we need more dams, and strict new conservation measures, to allow for more continued "growth."
The "growth" paradigm is one that hardly anyone questions. People talk about forcing "higher density" habitation, of recycling resources, to permit more expansion. But the real challenge is holding the line against growth, so that we can preserve an ecological balance between capacity and use.
Stated simply, our society, region by region, must acknowledge inherent limits to population. Around the world, we have seen what happens when populations explode: Widespread hunger, famine, lack of sanitation with disease and poor health, degradation of land and water, over-exploitation, financial hardship, poverty, hopelessness.
In America, we tend to pooh-pooh the catastrophic potential of over-population. We're a big country, and we can solve these problems if we think creatively.
But fresh water isn't something that can be "manufactured" or creatively stretched indefinitely to accommodate more use. De-salination is far too difficult and expensive to expect it ever to provide an alternative to naturally occurring run-off from snow and precipitation.
Given the available water resources of California, the state has already exceeded its allotment. Agriculture has sucked the aquifer dry; all the damns that could easily have been built have been built; and the water resources (especially fish) are already in a state of emergency.
Clearly, the answer to California's future water dilemma is to restrict growth throughout the state. There simply isn't enough water left to accommodate hundreds of thousands more new residents. If we don't stop the influx now, we can expect our quality of life to decline markedly.
The environmental community has encountered resistance when raising the population issue, but ultimately that's the built-in limit that will, in the long run, curb growth.
Instead of waiting until we run out of water completely, why not do what we can now to stop suburban sprawl and so-called "high density" urban concentrations, before we completely outrun our resource base?
In the end, must it be our fate to live in our own filth and congestion, or do we have the will to reject that version?
Posted by Curtis Faville at 10:39 AM

john mcphee has written on the water strategies in california
basically his argument is that there are too many people in that one place...but engineering dreams have allowed for more

were it not for the engineering exploits of the 20th century less than half the people could survive there...more probably in northern california than in the south

when those feats are no longer managable and people have to resort to natural appropriation of resources many will have to leave...north and south dakotah both have a lot of room and water

it's rather faustian to presume to manage nature is it not?
even though we seem to be able to do it is it the best thing in the long run??

when it comes down to managing the womb the women will have to decide is it about freedom or a new kind of slavery...i think the women like the idea of slavery to science it looks much more romantic to them than a presumed slavery to men