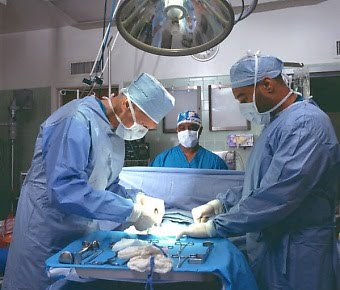 The crucial contradiction at the heart of the debate over public "universal health coverage" is that society ultimately cannot afford the same level of care for all of its citizens. Just half a century ago, medical insurance was largely nonexistent. It wasn't until the 1940's that group health coverage plans began to gain traction in America.

Since the medical services industry--hospitals, doctors, pharmaceutical companies--has been based on profit motive, the costs of providing service in all means of delivery (group insurance and private individual) has steadily increased as a share of GDP. Public governmental group ("single payer" plans in various forms) have not stopped this trend, though they may have moderated this steady inflationary cost pressure).
What does it cost society to provide both responsible preventive treatment, as well as emergency, drastic and terminal care, for all of its citizens? Is it prudent to imagine that every man, woman and child in the United States could have comprehensive medical, dental and vision care for life? What would be the actual cost of providing such levels of protection across the board?
Traditionally, in America, medical coverage and paid services have been tiered according to financial class. During the 1950's and 1960's, coverage was broadly increased to masses of people through employer or union connected group plans, as it was for military and governmental classes.
Medicare, as originally conceived, could not expect to "keep up" with the rising costs. Medi-caid, the need-based general treasury funded benefit, has also ballooned out of control. There is no doubt that both these plans have helped millions of people, just as the group plans have.
Both Medicare and Medicaid are scheduled to be entirely insolvent within a decade or so. The drug benefit provision will only bankrupt Medicare sooner. Health services costs, as a share of total GDP, are expected to rise much faster than any other segment of the economy. Why?
Because expensive, inflated care is being made available to larger and larger numbers of people. The private insurance industry knows that trying to run coverage systems based on universal coverage can't succeed, because there isn't any way to make universal coverage economically viable. Providing the very best coverage that science and technology offers, to everyone, is not sustainable.
At some point, there is a sifting process that distinguishes between those who can qualify for treatment options, and those who can't. That process of discrimination includes denying coverage to those with chronic conditions, and forcing those who have no resources into inferior treatment options. Medical insurance, and medical treatment, are like anything else--not everyone can expect to drive a Cadillac--some will be forced to ride bikes, or even to forego vehicular transport altogether.
Presently, the process of sorting people for treatment is controlled by the private health insurance industry. It sustains itself through rigorously enforced coverage management. Its for-profit model is one we would like to believe can't work to everyone's advantage, but that's a dangerous illusion: Blaming private insurers for discrimination is no different, in the long run, than blaming public universal systems for making people wait 6 months for an important surgical procedure, based on "prioritizing" the assets and facilities available.
Passing a "single-payer" plan in America won't solve the underlying problems of universal coverage. It will increase the obligations of an already over-burdened Federal budget, and it probably won't have the effect of lowering the costs of services either in the private insurance sector, or in the public one. Certainly medical costs haven't been controlled through Medicare or Medicaid.
The "efficiencies" envisioned by the optimistic believers in universal coverage plans will never be enough to overcome both the runaway costs associated with increasingly sophisticated and expensive technologies, and the "obligation" to those who will never be able to "afford" even a small percentage of the services they will expect and demand.
In the end, society will have to acknowledge that health care may be a "right" and not a "privilege"--but it won't be able to afford to facilitate that "right." Universal health care is a pipe-dream. Presently, we're in the last stage of an era in which a large percentage of people got what was the best care in history. But that era is ending. As the population of the earth burgeons out of control, and the earning power per person ultimately declines, the health coverage dream will die. Today, tens of millions of people die each year for lack of proper sanitation and health facilities. That number will increase rapidly throughout the 21st Century. In this country, attempts to expand coverage will bankrupt our Federal and State bureaucracies, with the result that eventually coverage--both in terms of availability and quality--will decline for most people. As the middle-class shrinks, and the lower classes grow, medical care will increasingly be the province of those able to afford it. It's an unpleasant reality that we can't "afford" to have everything we want, either from the government, or from life in general. We can't all have the best house, the best car, the best outfits, the best entertainment, the best vacations, or the best health coverage option.
Posted by Curtis Faville at 8:18 AM

One of the paradoxes is that illegals are supposedly covered, but Pelosi says it isn't American to not cover everybody, including non-Americans.

I think we should cover the whole world with our medical coverage. Anybody in Africa who has a hang nail should be able to fly here and spend a month in a hospital getting it repaired.

The Taliban should send its wounded to American hospitals.

To argue against that is so unAmerican.

We should give all our money to the people of other continents.

And then finally we'll be loved, about as much as King Lear was after he gave his kingdom away to his lovely daughters.

What did people do before group health plans?

They paid doctors in cash.

When did doctors become robber barons?

Is medical school worth 10 millions dollars to a doctor's patients?

Maybe we need to rethink the real value of medicine.

I recently came across your blog and have been reading along. I thought I would leave my first comment. I don't know what to say except that I have enjoyed reading. Nice blog. I will keep visiting this blog very often.