George Tice [1938-] occupies a position, historically, that follows closely the Second Generation of photographers in a sequence that begins roughly with the F64 Group (which included Edward Weston, Ansel Adams, Imogen Cunningham, Alma Levenson, Brett Weston, and a half dozen others), Dorothea Lange and Paul Strand, in the early Thirties, followed by a second wave that included Morley Baer, Brett Weston (again), Don Worth, Wright Morris, Paul Caponigro, Wynn Bullock, and Harry Callahan, among others). There is naturally some overlap--you could make a case that the first generation came to maturity before World War II, the second group after. A third generation, born in the late 1930's, or early '40's, would undoubtedly include George Tice. 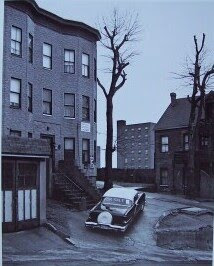 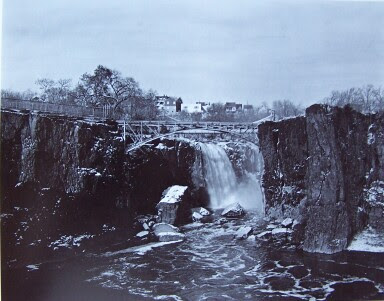 Passaic Falls, Patereson, New Jersey, 1967
Tice grew up and lives in Paterson, New Jersey, which was where William Carlos Williams lived and worked, and celebrated in many individual poems, as well as in his epic poem Paterson [1946-1963], which deals explicitly with this classic tough, industrial, immigrant community, rich in diversity. As such, much of Tice's work has the effect of a kind of photographic documentation of Williams's work. It wouldn't be out of the question to imagine that their separate efforts, separated by some 20-25 years, may come to be associated with each other. 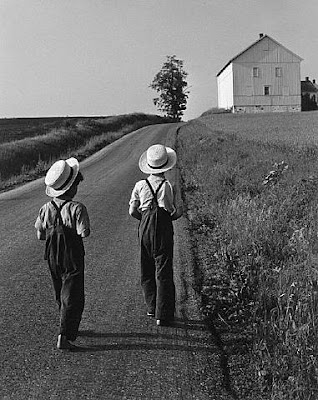 Two Amish Boys, Lancaster, Pennsylvania, 1962
Perhaps Tice's most famous images are his Amish photographs, primarily done in the 1960's, when he began to visit these traditional Pennsylvania settlements, mixing images of the countryside and buildings, with candid shots of the people, their children, and the way of life they pursued--a retrogressive enclave persevering inside the modern world of stream-lined technology and glib disinterest. The justly iconic image above, of two Amish boys, ambling along a country road in the late afternoon, has a kind of nostalgic grandeur which is as evocative as any shot of its kind in the history of photography. 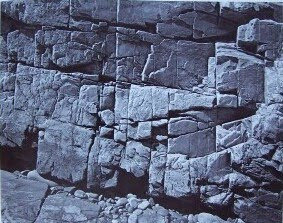 Rock Wall, Mount Desert Island, Maine, 1970
Tice follows in the 'supreme instants' tradition of Weston pere et fils in his exquisitely realized abstractions of nature, often taken somewhat improbably near his New Jersey home (though he has naturally traveled widely, primarily in the U.S., in his quest for subject-matter). The rock face above, and the delicate long-scale image of the oak, are singular examples of his nature images. 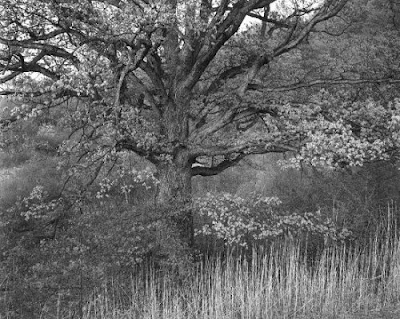 Oak Tree, Holmdel, New Jersey, 1970
Tice's work falls well within the straight imaging tradition. His work is understated, calm, contemplative. Man co-exists within a compromised environment of urban industrial development, and a lyrical nature which lies just outside the boundaries of our daily grind. Beauty is where you find it, and you have to be open to the possibility, anywhere, at any moment. It may not cry out to you for recognition; you must be alert for it, and be prepared to appreciate it, transform it, present it in its raw external manifestation.
This was largely Williams's milieu as well. The broken pieces of green bottle glass strewn across an ignored alley-way; the white polluted foam roaring over the gaunt rock of Passaic Falls; the Puerto Rican mother giving birth to a tenth child in a dingy tenement. Things as they are, not as we imagine they should be. Change and re-birth. Decay and fleeting instants. Albums of sentiment and screens of reality. Water and oil. Tar and whitewash. Silver and coal. Energy and exhaustion. Life and death.
Posted by Curtis Faville at 8:58 AM