Silence and Hannibal - The Hypnotic Fascination with Bestiality

The success of the Hannibal Lector series of films is reminiscent of the hoary old days of The Phantom of the Opera [1925], The Hunchback of Notre Dame [1939, 1996], and Elephant Man [1980]. The public fascination with a demonic perpetrator, bizarre obsession (including sadomasochism and torture), and lurid physical deformity, are all combined in this nifty franchise of films, each so far based on the novels of Thomas Harris [Red Dragon (1981), The Silence of the Lambs (1988), Hannibal (1999), and Hannibal Rising (2006)]. 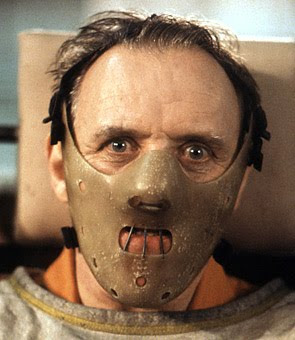 Anthony Hopkins, who has so far starred in three of these films, as the mad psychiatrist and cannibal royal, is a powerful actor, trained in the British theater system, so his career has not been dominated by the role, though it's likely he'll be identified more and more, as time goes on, with the character he brought to life in these films.
As demonic "monsters" go, Hannibal Lector is perhaps uniquely secular in his persuasion. Previous demonic monsters like Dracula, or Mr. Hyde, or Jack the Ripper, usually were conceived within a religious cosmology, in which evil is the result of a "fallen" angel prototype, an effect which tends to redeem the intensity and purity of the violence or malignancy, by holding out the prospect of divine prevalence.
Harris's Lector, on the contrary, seems to derive his demonic obsession from pure animal drives, as if he were returning to some ur-cannibalism of our distant tribal ancestors. Indeed, he seems to glory in the brute manifestation of his raw emotion, as if in primitive celebration of the rites of blood and sacrifice. He thinks of himself as cultivating in himself these uninhibited instinctual drives, in the same way he indulges his love of music, painting, scents, and good food and drink. He equates living well, with expressing his aggressions to the hilt.
In a cultured society, primitive emotion and violence are controlled, or kept at bay, through law and custom and training. Hannibal subscribes superficially to these limitations, only so far as they permit him to exercise his faculties at large: He doesn't bear others any generic malice, but feels justified--in his personal code of behavior--in doing violence to those whom he despises, or whom he feels stand in the way of a higher perfection. Obviously, this is a selfish vision, but selfishness is precisely what Lector believes in. Life is conflict. It may be glossed over, or concealed, or mocked, but human kind is no less competitive, when you come down to it, than other living creatures.
Do humans possess deeper natures of self-preservation and ambition and malevolence, that can be tapped, or cultivated, or which may rise unpredictably in moments of stress or excitement. Hannibal clearly experiences his own violent tendencies as a kind of drug; he's a truer manifestation of the hunter-archetype, though without affiliations. He's the modern cowboy cannibal, alone, unique, and driven.
In all three movies (I've not yet seen Hannibal Rising [2007] (which documents Hannibal's earlier life), there are varying degrees of gratuitous violence and disfigurement, which appears to fulfill the audience's vicarious attraction to lurid subject-matter, apart from the central plot device of the chase and the hunt. In The Silence of the Lambs, this glorification of disfigurement is performed by the psychopath Jamie Gum (the "Buffalo Bill") whose discovery and capture is the pretext for the ostensible action in the film. Buffalo Bill's bizarre desire is to transform himself into a woman, by symbolically skinning his oversized women victims and making himself a real human skin "suit" from their bodies. In Red Dragon, Francis Dolarhyde disfigures his victims (and their families) after performing sexual acts on their dead bodies, putting shards of glass mirrors in their eye-sockets. These proto-ceremonial acts function as "creative" expressions of primitive nature, but are wholly eccentric, unconnected to any larger meaning within the group. They are isolate, and pathetic, though they may seem necessary, even heroic, to the perpetrators.
Much has been made of the "attraction" of Anthony Hopkins's Hannibal portrayal, of the almost superhuman intensity of his force. Hopkins's ability to convey this aura of the supernatural raises the quality of the narrative far above the level of the drive-in slasher/chainsaw/Friday 13th sludge that caters to the mod-teen crowd. Lector sees himself as belonging to a society of value and behavior which includes Italian Renaissance royalty, of intrigue, plots, geniuses of art and music and literature--as if the sublime in aesthetics were on an equal footing (an equal plane) with the fevers of the blood, well-crafted murders, and the unchecked passions of desire. Hopkins is able to bring this off through the subtlety of his gesture, employing the full range of his gifts. It's the perfect appropriation of his dramatic skills to the demands of cinematic timing and compression. What other actor of similar skills could bring it off--John Malkovich? or...who else, among those presently in the business, possesses a similar complex energy? One name--ironically--comes to mind. Ironically, because Gary Oldman also stars in Hannibal, as Mason Verger, the rich Gay playboy whom Lector seduced into slicing off his face while high on laughing gas. Oldman did wonderful turns as Count Dracula (in Bram Stoker's Dracula [1992], and as the demonic Russian hijacker in Air Force One [1997], and in countless other unusual and challenging character parts. I for one would feel cheated, if Harris can't write at least one more juicy episode for Anthony Hopkins to play. It may have seemed disappointing to see Jody Foster depart after only one try at Clarice Starling (lord how I hated Julianne Moore in the other one!), but it was clearly Hopkins who was the whole point of the movie. Having created this great, complex character, and having found a great actor to play the part, what a shame it would be to lower the curtain now.
Posted by Curtis Faville at 12:32 PM

further substantiating my unified field theory of art and culture -

everyone needs to do something

Far scarier than Hopkins doing his Iago schtick as Hannibal.

That said, Hopkins hamming it up out performs about any 'Merican thezpian you can name. Titus was a pretty cool flick as well (including Jessica's tits_. Most other Brit. actors apres-Burton generally , uh, suck.