Editing Larry Eigner's complete work, which spanned over half a century of productive activity, Robert Grenier and I delved more deeply, exhaustively, into the chasm of one man's sensibility, sense of the world, than is very often permitted, or likely. In Bob's case, this included living with, and serving as custodian to, Larry, for over a decade. Our sense of the condition of his writing life was intimate, and comprehensive. In many of the ways in which it is possible to "breathe with" or to accompany another (writer), we shared that with Larry--in my case, primarily through the experience of reading his life work, from day to day, year to year, end to end.
The habitual address--the dailiness of Larry's approach--incorporating the minutest quotidian event--the minutiae of chore and instance and delight--gave to Larry's work the illusion of familiarity and immediateness, which is one of the miracles and strengths of his poems. Through his work, he was enabled and empowered, rather than being the victim or helpless object of fate. It is not as a "wheelchair" person that Larry's example encourages and heartens us, but through our experience of an ingenious mind. 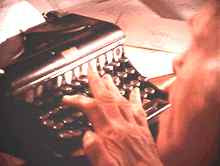 When I was a boy, my stepfather used to take me hiking up on Mt. St. Helena near Calistoga in the Napa Valley where I grew up. There was a stone tablet in the shape of an open book, commemorating the site where the novelist and poet Robert Louis Stevenson lived briefly during 1880, spending his "honeymoon" with his new wife Fanny in a bunkhouse at the abandoned mining camp up on the mountain--an experience he would eventually write about [The Silverado Squatters, 1883]. The old mine shaft was still open in those days--an old cinnabar mine, if I recall correctly--and the hole went briefly at an angle before turning directly down into a dark cavern. I knew Stevenson had been the author of Treasure Island, and Doctor Jekyll and Mr. Hyde, which we read. That a British Author of world renown should have spent time in this little rural area seemed improbable, and joyous.
Could I even have begun to imagine, then, that one day I would end up editing the work of an avant garde (disabled) poet in Swampscott, Massachusetts, who, just then was beginning to publish his work in little magazines like Origin and Black Mountain Review? How strange!
Posted by Curtis Faville at 5:32 PM

something strikes me
his attitude is one of affirmation and creating-ivity:
I AM! I AM!

rather than that (Hamlet) crap about

well, the past is the past and is dead...
and
the future ain't never gonna get here.. neither via politics(lies) (hope) OR religion (faith,myth and hope)

just must mostly be in the "I am" place and

get in your bag and do your thing


there is also this 'thing' about using words/type/ribbon/paper

to MAKE
a "painting" (w/words simultaneously
a dichotomy of

I haven't had time over the past few days to do much more than heft and dip into my copy, but it's already a delight. No qualms or misgivings about the format or typography or design or any such here. Just the opposite: it's handsome and abundant and makes a very grand gesture: itself, or themselves, as one chooses to turn.

Especially noteworthy, I think: you and your co-editor's diligent commitment to chronology. Often with a "collected" arranged in order of the original print editions, there's a tendency to slide over the familiar volumes and ransack the odds and ends for news. Or so I've found. Here, one is simply adrift on the sea. In its new context, even the familiar work is new. One starts fresh; goes back to the poem, as LE did, and of necessity slows to its focus and pace. Not a book for a day, but for many days. All that.

The strangest thing is, after seven years of typing and editing and going over and over it, I read the pages now and I can't for the life of me actually remember some of the poems!

Perhaps this is because there are so many. The shorter ones ring bells, but some of the longer poems--it's like I'm reading them for the first time. This is partly the disorientation of seeing them in the context of a bound book, for the first time.

Are the poems usually autobiographical: describing scenes and events and daily reading and notes from life, or does he make things up, too?

In the one book of his that I have I thought they were autobiographical, but about funny things most people wouldn't notice, like the sausage poem.

Well-written article. I once hit the "impasse" of perception about Larry's "disability" you had with Marvin Bell; in my case it was in correspondence with Denise Levertov about his influence on my work.

David, judging from the Duncan/Levertov letters, Levertov had a real 'blind' spot/prejudices toward people with disabilities.