Henry & June [Universal Pictures, 1990, color] is one of American cinema's most improbable productions. Philip Kaufman both wrote and directed the movie. Kaufman's credits are a little scattered--he's not a major Hollywood figure, and that perhaps accounts for the off-beat approach that characterizes this film, his most notable effort.
Clearly, Kaufman had to believe in the possibility of an unusual and challenging production, in bringing the story of Henry Miller and Anais Nin to the screen, since Miller's reputation in American culture was, and continues to be, among the most problematic of any major literary figure in our history. 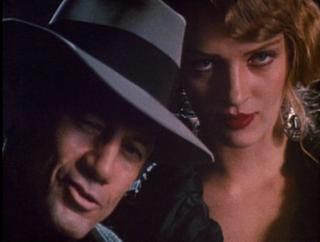 Among the obstacles which would confront Kaufman was how far he would be allowed to go with the verisimilitude of the plot, which involves a number of frank love-making (and partial nude) scenes: Censorship would become as crucial an issue with this film, as it had been to Miller's career as a novelist and memoirist (it was the first film to be released to the general movie audience in the United States with an NC-17 rating).
It was clear that Kaufman wouldn't be able to tap any major stars for the movie, because of its subject-matter, and because it would be an obscure production without much publicity or propulsion. Which explains why the cast was composed mostly of what was then a collection of mostly unheard-of or obscure acting talent. For Anais Nin, the central figure in the story, he chose a Portuguese actress, Maria de Medeiros, whose genuine unfamiliar looks and smooth style seemed the perfect choice to play the self-styled European femme fatale Nin. Except for a plum cameo in Pulp Fiction, Medeiros's parts have been largely confined to European cinema. For Miller, Kaufman chose Fred Ward, commonly referred to as a "character actor"--only because, as is often the case, he's never been considered for the usual heavy parts which makes stars out of ordinary mortals. Because of Ward's subtle abilities, a strong male presence, as well as his own interesting, peripatetic history as a struggling wannabe actor--he turned out to be a brilliant choice to play the redoubtable Miller.
The other two major parts--Uma Thurman as June (Miller's wayward wife) and Anais's banker-husband Hugo (Richard Grant)--were also miraculously prescient, as they both have gone on to major careers, especially Thurman. And finally, Kevin Spacey turns up as Miller's room-mate Osborn, in another brilliant minor turn, well before his star had risen.
It's a conundrum: Do great movies turn ordinary mortals into acting greats, or do casting directors, acting on tips and hunches, pick just the right people to play parts that seem tailored uniquely for them? Either way, it's a tribute to Kaufman's skill as a director that each of these major roles was played by someone who seemed literally to melt seamlessly into the identity of his/her character.
Despite the film's title, the story really centers around Nin's adulterous relationship with Miller. The film seems to presume a certain knowledge of the participants' reputations by the viewers, since very little background or biographical filler is provided. About all we know at the beginning of the film is that Anais is a sexually frustrated bourgeois wife, and Miller is a struggling writer, footloose in Paris, separated from his wife in Brooklyn. As the movie unfolds, we see a natural rivalry and affection develop between Miller and Nin, which both feeds their separate aesthetic needs, and chips away at their respective relationships with their spouses. Both Hugo (Nin's husband), and June, it turns out, are much more uninhibited and daring than we would have suspected. June, particularly, who has a strong bi-sexual streak, seduces Nin while driving Henry wild with jealousy.  This unconventionality is presented as would be expected, as creative-destructive irrationality within a Freudian context of suppressed sexual experimentation and risk.
Kaufman's version of Miller, as the earthy beast of Rabelaisian pretensions, intent on exploiting his sexual nature and uninhibited lust, but with a lively and basically innocent, impulsive and spontaneous nature, is contrasted to the scheming, unpredictable and mystical natures of the two women. Kaufman's framing of these audaciously "liberated" feminine prototypes--Nin's calculating predation, and June's sunken, self-pitying, coquettish vamping--against the "straight" Miller is a fresh commentary on the old-fashioned notion of the red devil exploiting women for artistic purposes, or simple selfish pleasure. 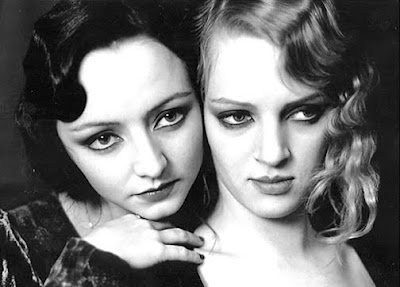 Both Medeiros and Thurman, in their very prime of beauty, bring real depth to the story. Medeiros/Nin presents the case of the "modern woman artist"--hungry for experience, insatiable for material, willing to use anyone, or anything, to achieve a transcendence over the given, contrasted against June--the emotionally complex, hypnotic, hormonally driven "deadly" witch who, if she cannot, as Henry's muse, inspire him to greatness, will castrate him with devastating critiques.
The spirit of the film--despite all this emotional sturm und drang between the main characters, is surprisingly light and casual. Paris is portrayed as a kind of peasant playground, with a host of odd-balls, including a quaint caricature of Brassai (the great French photographer), a couple of deft magicians, the art students' street gala, a saucy whorehouse madam, a prurient psychiatrist, and sundry colorful freaks--which is reminiscent, for me, of Fellini's clowns or the troop of circus performers in Antonioni's Blow-Up. Underlying this picturesque bohemian tapestry is a score arranged by none other than Anais Nin's real-life half-brother and classical composer-professor of music Joaquin Nin-Culmell, a figure mentioned before on this blog. Nin-Culmell's collection of war-horses d'amour, and touching impressionistic fragments of classical chamber pieces perfectly fits the mood of the movie. Special favorites include the captioned clip from his Tonadas for the foggy Paris street night scene; the spirited piano romp accompanying the bycicyle ride in the forested suburbs; and Henry's dancing rendition of "Barnacle Bill, the Sayyyyyy-lor!"
While Henry & June is in many respects a fictional evocation of a time and place which is storied, the emphasis here seems to be on dramatic elements seen apart from their literary associations. Henry may be working on a book titled Tropic of Cancer, but there's nothing else about this fact in the movie, nothing to suggest the implication of what Miller's or Nin's work might signify beyond their specific interactions as characters. Their assignations are treated half as humorous close-escapes, half as pathetic passion.
The ending is delightfully inconclusive and free-spirited. Henry & Anais will remain friends for the rest of their lives, though their paths will diverge. This series of episodes in their artistic quest for realization and self-possession can only be important for them. For those who know only the work of these figures, this half-fictionalized dramatization of the actual (seen through the glass of Nin's admittedly favorable distortions) neither adds to, nor subtracts from, our sense of the meaning of their works. As celebrity bio, it's simply a kind of shadow-play on a curtain. But as cinematic entertainment, it's great stuff. We can enjoy superimposing the notorious real models against their fictional counterparts, while remaining free to follow the story autonomously, as pure drama.
Posted by Curtis Faville at 2:49 PM

phunny co:onceidences many connections/re:connections
am just now into "letter"
12 June 19, 1936
of

thanks for never heard-tell of this movie

a drama, a fiction will "track it down" for the phun-of-it

'twas really neat how both Henry Miller AND
Anaïs Nin ((((here is a
photo of her about the time that I met her...an handsome woman (still) wearing a bit too much make-up annd perfume for my taste, however..)))) when she came to Hopkins
on a book tour/reading/visit) 1971)
http://en.wikipedia.org/wiki/Ana%C3%AFs_Nin))

.. both created their own myth/literature of themselves from the inside/out rather than others' making a myth from the outside/in..

sure hope this movie is done in black-and-white...colar and noise seems to "rule the roost" now at/in movies... ruins (most) narratives... etc

searching the stars
for intelligent life
damn little of it here

The actor playing Miller did a pretty good job, tho' the real Henry was I suspect quite a bit meaner and leaner (there's a few phunny clips on youtube, like aged Miller in New Yawk, "this sheethole," etc).

The gals looked the part at least--could have shown a bit more flesh, and splendors sapphic--(Miller once yawped he could read european history in the folds of a c.... er, vagina...). The Fellini-esque elements were...Fellini-esque.

On the whole I found H & J tame, the few exciting or dreamy scenes outweighed by mundane--(tho' TBH Im not sure I saw the director's cut, an edited or the NC-17 version, or the only for rich westside perverts version, etc).

I'm glad to see that someone is still writing about this film after so many years. It has mostly fallen into obscurity after its controversial birth. I think the film is best if you don't relate it much to Henry Miller. Compared to standard Hollywood, the subject matter and approach to it are interesting. Of course it's not as sensual as it might have been, but Hollywood simply won't allow it. This movie is as close to an erotic art film as mainstream Hollywood can ever get (maybe 9 and a 1/2 Weeks is also a serious attempt in this genre). It's also about as close as any American can come to the European sensibility. Basically, it's just a pretty good film that is interesting for some good performances, some beautiful cinematography, interesting subject matter and the beauty of Maria de Medeiros. The film is also notable for its effect on certain sensually inclined women who tend to admire it because it's sexy without being porn. While some of us might lament that it does not approach the earthiness and directness of Miller himself, it's a great in-between kind of film for turning on women. I suspect Miller would have approved of its viability in that area. Thanks for your thoughtful, enjoyable post.

If I hadn't known anything about the production problems involving content rating, I would probably have appreciated the film on its own terms, without worrying about how faithful it was being to "Miller's conception"--but one must remember this is really Nin's version of the story, and not Miller's. And that's also a reminder that her emphasis would naturally be on the women, not on the male side.

Miller's version, if approached cinematically, would probably be cruder and "earthier". It would, then, be a different story. The Nin version draws particular attention to Henry's vulnerability and fragility, rather than his strengths. I doubt a Miller version would have included that.

I don't know Nin's work as well as Miller's, but there are some (such as Gore Vidal) who find her self-serving and manipulative with the truth.

What I most liked in the movie was Kaufman's willingness to let certain kinds of pointless, poetic gestures stand for themselves, without insisting that they have some kind of moral consequence or integral purpose in the plot. The story exists within a kind of static dreamy envelope in time--when June exits it's almost as if she's leaving this suspended space to return to reality (New York).

The feminine love scenes are presented not as lesbian interludes -- though I suspect that's how some people perceive them -- but as expressions of pure experimental exploration. Which reminds me of Victor/Victoria.