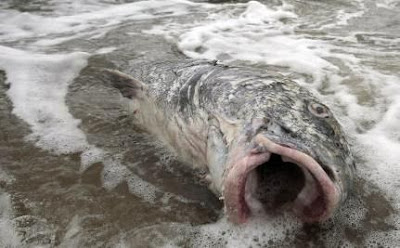 Now, one month and a week after the British Petroleum Gulf Oil Disaster, the company--and the Federal response agencies--still appear to have no clue how to repair the damaged well-head which continues to spew raw crude oil--from one mile down on the ocean floor--into the Gulf of Mexico, and onto the surrounding shore and tidelands.
As I surmised in my previous post of May 2nd, 2010 ["Why Offshore Drilling is a Big Mistake"], there is no reliable scientific or engineering precedent for addressing this kind of disaster, and therefore neither the company, nor the governing agencies, has a clue how to solve the problem.
So-called "assurances" issued by the company's engineers all hinge on the unlikelihood of such an occurrence, in effect saying "this couldn't happen, so we never thought about how to fix it if it ever did." Now that it has happened--as Murphy predicted it would--British Petroleum is scrambling around trying to buy time by making calm, measured, "we're in control of the situation" pronouncements. But it's now a month later, and it seems no closer at this juncture to fixing the problem than it was the day after it occurred.
Oceanic conditions at depth present a number of difficulties. There is the problem of access, the ocean pressure at that depth is great, and the machinery needed to manipulate tools and structures at that level simply doesn't exist. Creating an offshore well in deep water is a difficult proposition to begin with. It's much easier simply to set up a drilling bit, and pump up out of the well, than it is to repair it once it's been broken.
The petroleum community--the corporations, the engineers, the regulators--everyone knew perfectly well that if this ever happened, they'd have to trouble-shoot a solution, because no methodology for addressing it had ever been developed.
Petroleum mining is a very dirty business, in every sense of that phrase. Oil companies routinely spoil the environments where they work, and the profits they derive from this exploitation insure that the process of oil leasing and permits will rubber-stamp every proposal they present.
The media politely interviews company executives and spokespeople, and the government overseers, and everyone minces gingerly over the embarrassing facts which are brought to light about the shoddy commitments the industry makes to safety. The public wrings its hands, while the ecosystems of the ocean and gulf coast are devastated.
The lesson to learn from this is that offshore petroleum mining is a destructive process, and that those who practice it are cavalier about the welfare of the environment. Bottom line, they have no real standards beyond the profit motive. Of course, we all knew that. What we didn't really want to think about, and what the companies are now embarrassed to have to admit publicly, were the consequences of a major, but predictable, failure of the technology. Now that it has happened, and we've seen how they lied to us, we're in a position to reject their phony assurances.
But people are stupid. They don't learn from their mistakes. They hope and pray and play the odds, even when they know the deck is stacked against them. People will gamble even when they know they have almost no chance to win. Eventually, we will license the oil companies to set up rigs all along our coasts, pretending that we've "learned our lesson" and won't make the same mistake twice.
But the lesson here isn't to keep doing the same damn thing again. The lesson is to stop.
Posted by Curtis Faville at 8:32 AM

Y'all DO KNOW how many Deep-Into-MotherEarth wells there are r i g h t now in the Gulf? I betcha
about 4,000!

our entire thrust by land, sea and air is driven by
Greed and Power.

my gut feeling? that there are countless leaks continuously leaking and will NEVER be stopped/capped...

what were those movies Wayne made? He ran into the well fire and to put it out pissed on it!

they were after his cowboy movies and before he solved the VN war "problem"
my supposition's best guess:

every single humongous super oil tanker in the world is filled with crude to capacity just sitting there waiting for the price of oil to go up..

as they've done in the past

or maybe a Mutual Energy Fund? and "hedge" things with Precious Metals and Financials, and Large Caps!

Obama just goes on blasting conservatives. It's the only thing his training as a liberal has taught him to do. He doesn't know how to respond to this unless he can blame it on Bush. He's an idiot.

Even James Carville has turned on poor stupid Obama:

The news media mentioned last week that tar balls had been found on some beaches in Key West.

Not to worry, they quickly assured us...they were not associated with the Deepwater Horizon blowout!

Umm...okay. So where did they come from? Nobody asked.

those particular tar-balls
washing up in Florida
come from the oil that is leaking (continuously) from the Disney Cruise ship! The one that London Tipton owns.


much linked to/written about in this newspaper..

It is very sad what has happened and there is no remedy to the disaster that caused to hamper the normal life of life under water.,the animals are thinking the sticky oil that is floating to be water and thus dyeing when consumed.What we must not forget is that it is a food chain and we are at the tip of it.