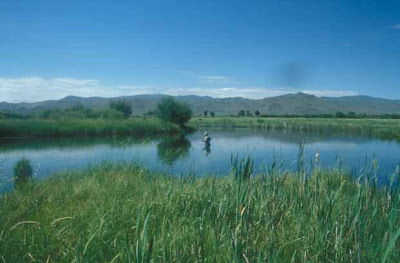 The color picture above was taken at Silver Creek, Idaho, not far from Sun Valley. Literary types will recognize this as Hemingway's last residence, where he committed suicide by shooting himself in the mouth with a shotgun. Hemingway loved to fish Silver Creek, and his son John Hemingway (the "Bumby" of EH's early years in Paris), who lived nearby in his later years, was instrumental in getting the Nature Conservancy to acquire the property bordering the stream, in order to preserve it for fishermen for perpetuity.
Silver Creek is beautiful in a specific way. Located among hayfields, in dry country, almost semi-desert. The air is clear, and the sky is operatic, with big cloud formations, and dramatic sunsets. I've fished here half a dozen times over the last 30 years, and never was disappointed.
Once, on a lonely late Summer night, I stubbornly refused to pack it in, and kept casting and casting into pitch dark, just under the downstream side of the little bridge which crosses the stream near the public access point. Big browns were rising excitedly, as they often do just at the end of the evening hatch, when they usually also seem most selective. Suddenly, a huge lunker grabbed my second to last cast. Rising dramatically out of the water, he flew through the air, landing with a great "flop" against the steel brace on the side of the bridge, falling back with a splash into the water, throwing the hook, and summoning an astonished "whooh" out loud from me.
I'm leaving the Bay Area this weekend for two weeks of fishing in Idaho--a long postponed respite from the chores of editing the Collected Eigner, knocking out semi-daily blog essays,  and selling rare books on the internet. I'll resume sometime after the second weekend in June.
Wish me luck!
Posted by Curtis Faville at 7:34 PM

there really are Purple Mountains Majesty there!

and are fish always "large" and "huge"

I guess that they eat the littles ones? but, that doesn't make sense else there would be no large/old tough fishes
to kill and fry up.

I wish you and wood s lot had coordinated your vacations so I would have at least one of your to share my morning coffee with these two weeks. I hope Idaho was good to you.

Do you stay at a motel, a campsite, or what?

Hope you caught something.