From the Gallery of Heroes: Edward Weston - Pioneer

Edward Weston [1888-1958] is undoubtedly the most important "serious" "fine art" photographer of the 20th Century. Not because all his images rank at the highest level, or because his images are the highest expression of their various subject-matter. But because his career begins at the dawn of photography as a serious art-form--as opposed to a mere curiosity or recording device--and he is in many ways the first to exploit the medium with a purely aesthetic strategy. Weston's adventurous spirit, his willingness to go beyond traditional, popular notions of image-making, enabled him to pioneer photographic endeavor, and his place in the history of light-sensitive materials will always be preeminent. 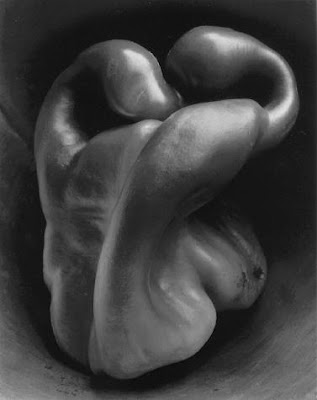 Since Weston's images are by now so familiar to the art public, and because so much has been written about them, both from an historical and an aesthetic perspective, there isn't much original observation or comment one might make that would shed new light on his career, or its affect on subsequent developments.
It does seem clear that the technology (silver emulsion light sensitive process) he used is going away, supplanted by digital processes--and is unlikely to be revived or extended, except by a stubborn few. The simplicity and directness of silver halide emulsion manipulation--which was a method he perfected to his purposes--will not be generally available in the future, if at all.
When Edward Weston began his career as a professional photographer, the medium had been stalled in a painterly conceptualization referred to as "pictorialism"--which derived much of its impetus from late 19th Century movements in the plastic arts--Impressionism, soft focus imagery, the emphasis upon "mood" as against starkly realistic depictions. Even Stieglitz, whose Camera Work promoted new photographic ideas and techniques, began as a "pictorialist" and did not initially see the potentialities of "straight" clear focus photography.
It's difficult, now, to imagine what it must have felt like to see some of Weston's early daring pictures, for the first time. Abstraction at the level of Pepper #30 [above] might have seemed a familiar enough approach to those who knew of the work of the Surrealist painters. But for those who tended to think of photography as a merely pictorial medium--for taking still portraits, or for documenting architecture, or landscape, or atmospheric phenomena--such formally powerful shapes may have seemed baffling, even absurd. 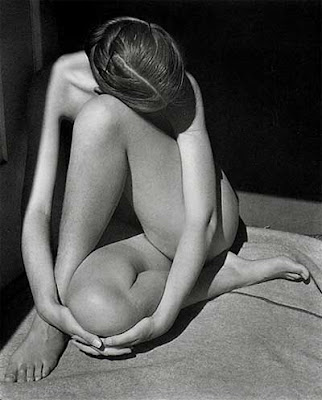 I can remember some years back, at an exhibition of Weston's 8x10 contact prints in San Francisco, two young men viewing a nude study. "He sees the human body the same way he sees vegetables," said one fellow to the other. "Yeah, and with the same disinterested objectivity. Ugly, isn't it?" This "objectivity" is precisely the kind of seeing--of a dispassionate appraisal of form--that Weston's vision consists of.
In many ways, he was the first to see that a photograph could be seen as an expression of the same principles of design which painters had been thinking about for 100 years earlier. The fact that a photographer might "find" his images in nature, or already pre-existing in the world, did not suggest that the ultimate power and visual tensions could not also be expressed in a photograph, as well as they could in a painting. 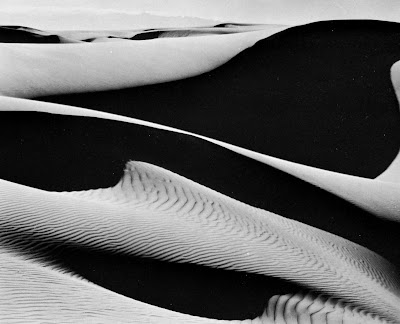 The very same principles of light and shadow, density and depth, texture and shape are exploited in image after image. Nudes, dunes, peppers, lettuce, seashells, bark, water, rock. How natural forms are expressed through the lines and masses of their structure, the weave of their growth, tending and constricting, flattening out or scattered across planes, etc.--this was the ostensible "subject" of most of Weston's prints.
This illumination--an epiphany, really--of Weston's visionary exploration of the power of forms in nature, possesses an originality which was almost unique. Between about 1925 and 1950, almost no one else was making pictures in this way. 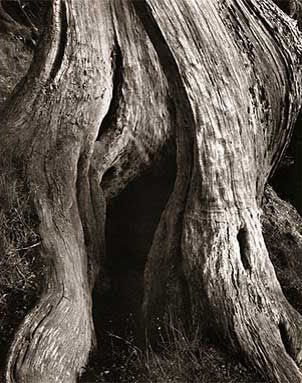 Weston's personal life was as inspired as his art. Following his marriage to Flora May Chandler in 1909, he had a series of affairs with models and apprentices, culminating in his relationship with Charis Wilson, a buxom redhead half his age who shared his life during his most creative period. Throughout his adult life, Weston managed to juggle his relationships with his four sons, sharing alternating custody with their mother. Much has been written about Weston's bohemian life-style, and its probable affects on his artistic choices. Were Weston's sexual adventures an alternative expression of his artistic drive? Did his "open" life-style during his middle years, when he was separated from Flora and restlessly moving from place to place, from woman to woman, liberate him to pursue "forbidden" aspects of the world through his art? It seems likely. 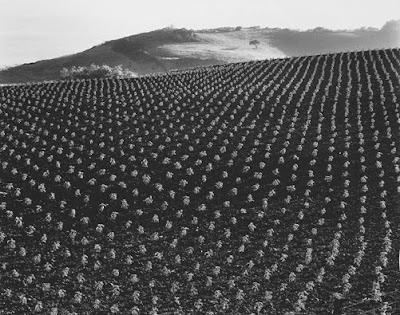 But in the end, none of this matters. What we have are his images, and they demonstrate conclusively that for 25 years, he was the avatar or vanguard of photography as an aesthetic medium. But the fascination we feel at seeing his images has nothing to do, really, with a liberated life-style, or a defiant attitude towards middle-class respectability. 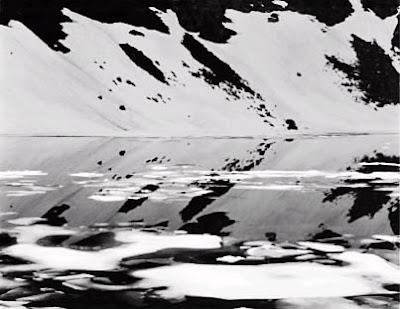 At their best, Weston's images have a kind of centrifugal, hypnotic power which is both the impact of their novelty--that sense of surprise that immediately catches our attention--as well as a strongly balanced overall composition. His images are always powerfully grounded (gravitas)--they rest solidly, and seem to grow out of their bases organically into the outer reaches of the frame. There often seems to be a kind of integrity derived from a struggle which is held in perfect check by the rationality of the mind (eye). This struggle--or tension--may suggest conditions in the maker (or viewer) for which the image is an analogue. But we need to be careful about imputing narrative or programmatic meanings to such analogies.

Is the image below hot, or cool? Nervous, or relaxed? Sexy, or intimidating? Under the unforgiving light of the desert sun, the capitulating, undulant masses of crystalline sand cascade in waves of retreating instability. Do the regular increments of striation along the bottom submit to the darker, advancing, more erratic masses from the upper left of the frame? Is there a sense of invasiveness, perhaps even of violation, taking place? 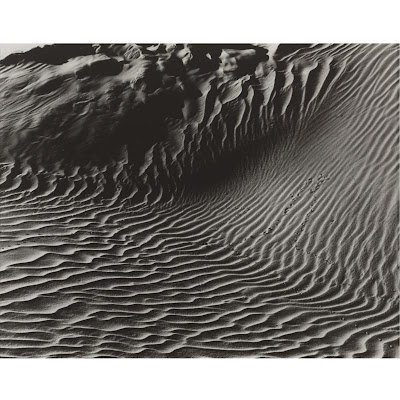 Such psychological interpretations may stretch our credulity to its limits. But Weston's images repeatedly suggest such kinds of muscular struggle--a struggle which he usually seems to resolve. Whether this resolution is purely a command of the medium, or the mastery over his own passions and inclinations, is another question.
Posted by Curtis Faville at 9:14 AM

This is a short, lovely meditation on a photographer encountered when I first began looking at the world of photography. It was good to see a few of his photographs again and read your take on his work.

Hi, The picture of Edward Weston at the Lamy waterfalls 1941, was taken by my father,Ernest Knee and is copyrighted.I like your site and do not mind you using it as long as you give credits where credits are due.
http://www.artworld.us/ernestknee/index.html
The Ernest Knee Photographic Trust
Thank you, Dana Knee.

Like a lot of people, I find images online which are often uncredited. I don't remember where I got this image--but I may have located it surfing through the Google image bank.

I have revised the post to include a reference to your late father's trust. It took some doing, since Blogger has revised its formatting procedures, but the citation is now there.

I was unfamiliar with your father's work. I recently read a book about Howard Hughes, and wrote a blog about him. There must be photos of Hughes in your father's archive.

Thanks for the nudge.