Donald Justice [1925-2002], about whom I've written previously on this blog, was a fine poet as well as an effective teacher. I was privileged to take one of his workshop courses at Iowa in the early 1970's.
A native Floridian, Justice always maintained a fine Southern gentleman's bearing, and always brought a subtle, understated quality to his remarks about poetry, whether as praise, or condemnation. Having as deep an interest in music, as he did in poetry--he was trained as a composer as well as a poet, and might well have chosen the first over the second, had he not been so talented in writing--his apprehension of the musical characteristics of verse, in prosody, informed his poems with a craftsmanly finish that was also equally subtle in its translucent simplicity. Deceptively simple, was a phrase that often came to mind in discussions of Justice's verse--as if the ease with which it seemed to lie on the page, and sound to the listener, was a quality one might emulate.
Justice was not the outdoors-y type, scurrying around the world looking for adventure. He was a quiet man, who lived modestly, and privately. The poem I've chosen to talk about, "Here in Katmandu"--though it is ostensibly about the vicissitudes of toil and adventure--is therefore not a celebration of the physical exhilaration of climbing, or the bracing impressions of altitude and the immediacy of strange landscape(s). It is, instead, a poem about desire and unresolved contradiction.
Here in Katmandu
We have climbed the mountain.  1
There's nothing more to do.  2
It is terrible to come down  3
To the valley  4
Where, amidst many flowers,  5
One thinks of snow.  6
As, formerly, amidst snow,  6
Climbing the mountain,  1
One thought of flowers,  5
Tremulous, ruddy with dew,  2
In the valley.  4
One caught their scent coming down.  3
It is difficult to adjust, once down,  3
To the absence of snow.  6
Clear days, from the valley,  4
One looks up at the mountain.  1
What else is there to do?  2
Prayer wheels, flowers!  5
Let the flowers  5
Fade, the prayer wheels run down.  3
What have these to do  2
With us who have stood atop the snow  6
Atop the mountain,  1
Flags seen from the valley?  4
It might be possible to live in the valley,  4
To bury oneself among flowers,  5
If one could forget the mountain,  1
How, never once looking down,  3
Stiff, blinded by snow,  6
One knew what to do.  2
Meanwhile it is not easy here in Katmandu,  2
Especially when to the valley  4
That wind which means snow  6
Elsewhere, but here means flowers,  5
Comes down,   3
As soon it must, from the mountain.  1
Justice liked puzzles and problems--and was not averse to gambling occasionally. This casual interest expressed itself in his poetry as an attraction to solving formal structural design problems. His great facility with words enabled him to write poems which "hid" inside demanding structures, but which themselves didn't wear this gamesmanship on its sleeve. In other words, for Justice, a poem had to succeed on its merits, without falling into the trap of making "finger-exercises" like Hanon or Czerny.
"Here in Katmandu" is an incomplete sestina. Justice's poem employs the classical retrogradatio cruciata but lacks the ultimate tercet. Repeating all six words in the concluding tercet would almost certainly ruin the poem by drawing undo attention to the formal crowdedness of the structure. I have numbered the lines to show the sequence of repetitions which the poem follows. In one instance, the repetition is altered--"do"/"dew"/"Katmandu"--to accommodate sound without using the same word--a deviation which, as much as anything, is experienced as a witty grace-note, instead of a failure of intention.
Despite being a sort of closet formalist, Justice was as apt to be poking fun at formality, as he was advocating its use. Within the overall arc of his career, Justice tended to publish classical, traditional formal models, less and less as time went on. Mastery of one's craft may best be demonstrated when one has gotten beyond the need to tinker with the metaphorical acrostics of game-poems. Formal requirements may serve some poets as a pretext or justification for utterance, allowing them the freedom to speak in a voice that is in some sense a privilege that vers libre does not allow. This permission is similar to the institutional or ceremonial craving that many people feel about highly charged emotional occasions like birth, death, marriage, and religious service. Should a high degree of feeling or conviction move us towards classical form, or towards eccentric informality? It's a question for which there can be no correct answer, since the tendency varies from person to person. 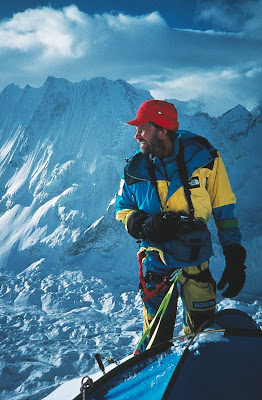 Any task which taxes us to an absolute limit develops strict procedures and requirements, rules and guidelines which may mean the difference between survival and death or serious injury. Katmandu is a principle city of Nepal, which contains eight of the world's highest peaks, including Everest. This is, literally, the "roof of the world." Many of these peaks were once thought insurmountable, but they have all been conquered; and Everest has been attained by almost 3000 individuals to date. Mountain climbing can become an obsession, just like any other difficult feat.
The desire for height, its difficulty and challenge, has seduced men since the beginning of time. There are many myths about high altitude, its affect on consciousness and the imagination. The fact is that men are not suited to indefinite existence above about 10,000 feet. Genetic adaptations can allow people to live at such altitudes, but for most people, the thinness of the air (density of oxygen) will cause various kinds of sickness. 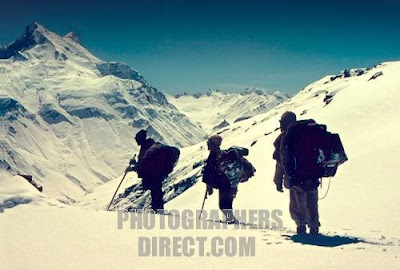 Justice's poem sets up the familiar tension between man's desire for the attainment of such a higher state of being, and the quotidian existence of living in cities. This dichotomy is symbolized by the distinction between flowers, and snow. Living in cities--"It might be possible to live in the valley, /To bury oneself among flowers, /If one could forget the mountain"--is thus a kind of death, a submission to common, unchallenged existence. Whereas, climbing towards a goal, a difficult summit, amidst the struggle, "one knew what to do." The tension between this struggle upwards, the inevitable necessity to come back down to earth, among the comforts and requirements of civilization--and the longing and anxiety we may feel, for the rarified atmosphere of extreme effort and the ecstatic intensity of attaining the summit-- are held in perfect balance in the poem. Reading a poem like this is not unlike looking at a Rube Goldberg machine. Poems may be like devices--small machines made out of words--which "do nothing" except run in place--mere toys of the mind. 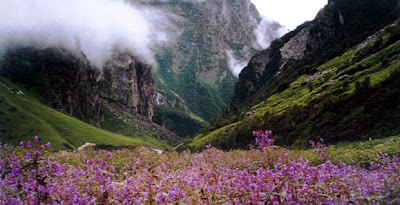 Justice's poem is essentially comic in its implication, and droll in its manner. Up, down. Happy, sad. Lazy, energetic. Snow, flowers. The poem is also like a kind of prayer-wheel, spun round for luck or good energy or sacred protection or to accumulate wisdom. Play it again. It's the riddle of wanting and having, saving and spending, wishing and waiting. 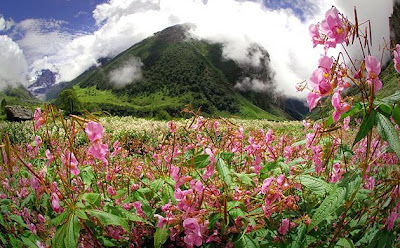 The best poems are often complete unto themselves. At poem's end, there's nothing left unsaid, or unattended, nothing wasted. Each kind of anxiety--whether for the heights or for static resolution--is perfectly weighted against its opposite. Nepal, where Hinduism is practised by a larger majority of people than in any other nation. In its passivity and stoic acceptance of given conditions, Hinduism strives to resolve the oppositions which pull human nature in conflicting directions. There is not a little of this concept in Justice's poem, though his investment in it is, typically, ironic and non-committal. At the highest plane of awareness, snow and flowers, the heights and the depths, are but the flimsy simulacrums of a deeper reality, of which this mortal world is composed.
Like the strict formality which seems only a pretext for the occasion of a meditation upon a classic riddle, Justice's poem performs a rite of performance, a sort of mantra of resolve. Forms are but the shadows of a higher order, an order which it is not given to us to know. And so we practice these rituals of desire and frustration, forgiveness and grief.
Posted by Curtis Faville at 7:08 AM

AMAZING! You are not gonna believe thI:

I am at this very moment reading 'collected poems Donald Justice'

and have just read the poem: For A Freshman Reader

and GUESS WHAT? NOT A SINGLE PERSON E V E R checked this book out!!!!

what the hell IS going on in our Educational System?

no wonder we are sinking..

we've been in the crap so long
we
can no longer smell the stink!

Ed
not to worry..
the answer to your question
is in the "open letter"
in GQ's current issue:

don't bother to buy the magazine... it is all ads and
every ad looks like same computer did it!...

check it out at a magazine stand at Brentano's or that other "book" store.... Barnes and Ignoble.

rioting in Katmandu as we speak:


I think that "they" are hurling live poems at "them" or it it merely
vice-uh and verse-uh?

some one at CITI made $5 billion via a computer "event" tuther day in 5 NANO-SECONDS!!!
while Rome burned my retirement fund
I wrote another 'shortie':


searching the stars
for intelligent life
damn little of it here