As almost everyone knows, Ernest Hemingway took his own life--by shooting himself in the mouth with both barrels of a shotgun, in 1961--in the little town of Ketchum, in the Sun Valley area of Idaho. Sun Valley had been, and continues to be today, a posh watering-hole for the well-to-do (and in some cases famous), to indulge in skiing or horseback riding or hunting and fishing.
I visited the area in the 1970's, exploring notorious fly-fishing venues for the first time. The Nature Conservancy had bought up much of the land surrounding Silver Creek, in the lower valley near Picabo (pronounced by the locals "peek-a-boo"). I've been back several times, and this time I spent 10 days fishing Silver, the Big Wood River, and the Big Lost River over the mountains to the East. The weather this time was fairly uncooperative, and I spent much of the time at Silver sitting on the bank watching dead water, as the insect hatches (and the fish) failed to show much activity.
Nevertheless, I did catch some lovely Rainbow and Brown trout, using 6x leader and flies smaller than size 16. Much of the time, the fish were sipping midge emergers--about a foot to an inch below the surface, at about size 20 or 22--which made tempting them nearly impossible. There were very limited hatches of the larger pale yellow or olive mayflies in size 16 or 18, and this meant most of the anglers were frustrated, or even skunked. The seasonal imbalance, which we had seen in California this year as our Spring was one of the wettest in recent record, was also affecting the Northern Rocky Mountains. Storm after storm rumbled into the valley, whereas just 50 miles to the South, there was no precipitation at all. 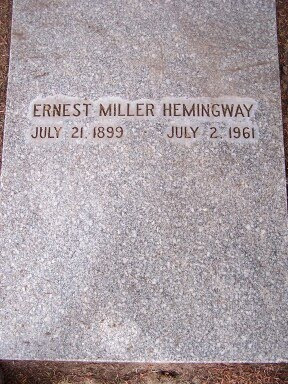 On one of the off-days, we visited the Ernest Hemingway grave in Ketchum, in a graveyard right beside the main highway through town. Beside Hemingway's stone, are identical flat plinths for Mary, EH's widow, and his son John (the "Bumby" of A Moveable Feast). The plainness of the stone--with no inscription or other decoration--struck me as a bit dry.
Sun Valley's reputation was certainly enhanced by Hemingway's having chosen the place to live in for part of each year. According to local legend, he spent a lot of time drinking in the taverns and bars--no surprise since he was a confirmed alcoholic for most of his life. There are a lot of photos of EH shooting game-birds in the Valley, but not too many of him fishing Silver Creek. It was actually the presence of his son John Hemingway, and his efforts on behalf of the Nature Conservancy to secure the area for public access and protection from private development, that has attached the family name and notoriety to the Preserve. The Silver Creek Preserve now hosts tens of thousands of anglers each year, and is famous the world over for its rich stocks of wild trout, and tantalizingly placid spring creek flows.
I had two very good days on the Creek, and one wet rainy morning float-tubing just below the bridge, catching an 18" Rainbow who jumped four times high in the air. I got drenched for my trouble, but these dark, roily days are often exciting, especially when there are few anglers on the water. There's a curiously strong sense of satisfaction following a successful day on the water when the weather's rough. It also doesn't hurt to follow this up with a nice shot of Talisker around a roaring fire.
My companion Keith Mosier--a friend from several years back--is a self-taught fishing genius, and has parlayed his amateur's knowledge and experience into a genuine expertise. He routinely out-fishes the waves of self-appointed fishing sophisticates who visit his home water, and with only half the investment in expensive equipment. As my unofficial local guide, he enables me to perform with the best of the brigade of professional anglers who frequent the Silver Creek Preserve.
With any luck, we'll have another crack at Henry's Fork of the Snake, some two hundred plus miles away from Sun Valley. Maybe later in the Summer--?
Here's a photo of Keith near the access point to the "S-curves" section of Silver Creek, munching on some trail mix following the mid-day hatch. Here's to a great trip, and many more in the years to come! 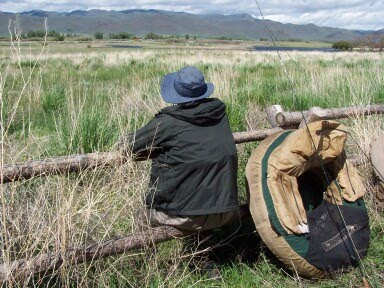 I would like you to break down your trip by cost, rounding out to the largest dollar, and telling us where you stayed.

Did you scale the trout yourself, and cook them over a campfire?

Did you have a side of mashed potatoes from a box?

Did your wife go with you?

did she catch anything?

This reminds me of times I spent in the Ruby Mountains while working on a ranch in Deeth, NV — my summer job as a teenager.

In many ways a different place but for me the feeling is very similar.

And though there's no roaring fire, I think I WILL have a shot of Talisker (my favorite single malt).

As you certainly know, George, Deeth is accessible off I-80, which I passed by on my way home. Those great desert names--Deeth, Beowowe, Last Chance, Contact--are certainly evocative in the arid Nevada outlands.

If you get to Reno, there's a fairly new excellent used book emporium, Zephyr Books, which is just a little Southeast of the center of town. The folks who run it are getting on, so I don't expect it'll be there for very long.

The float tube which you see in the picture has a scale on the black canvas wrap--the tan rectangle. It's handy for measuring the fish's length when he's landed. This is all catch-and-release water, by the way--you put the fish back into the water. This allows him to live and fight another day, and to propagate. It's pure sport--not a food game at all.

Trout can be great eating, but in trophy fly-fishing waters, killing them would quickly denude the stocks and make it barren. The Indians on the Klamath have been harvesting salmon for generations, but now that their numbers are on a steep decline, this traditional source of food and cash has become an intolerable stress on the resource.

The flower of our seas is being consumed. Even the oceans can't sustain our over-zealous exploitation much longer. The Japanese are sweeping the Mediterranean clean of tuna--soon there won't be any at all there. What then?

never fear, Curtis, OUR Science and Industry will
grow our future fish supply in swimming pools...and "save the day"

just like now most our Atlantic Salmon now comes fully fatted from swimming pools in Taiwan and Viet Nam and FRESH...
guess what these fish feed on! What do they call them? Farm Raised Fish. very high in PCBs and Mercury and Poop content....

and Tuna... they's the fish with the highest heavy metals content of all the fish
I'm switching over to only
eating those fresh lobsters with rubber-bands around their mouth food-gathering claws that have been in those tanks at the grocery store for 3 months eating only their own shit that floats into their little mouths..

and then, I will only eat the fish FRIED in Lard so to kill all of the salmon-ellas!

OH well... these poluted fishes/seafoods are healthierror for human consumption than our meat supply

Curtis, if the Japanese eat up all the fish, I guess we'll just have to eat up the Japanese!

Interesting reflections, Sir Faville--tho' Hem was I believe either mad (perhap due to a diet of hard booze and gluttony for decades), or ...a bit of a drama queen as El Viejo. (Big Two Hearted River still a fave however)...

That said, fly fishin's requires much work, and pricey booj-wah gear, and one has to drive to Idaho or Montana to do it (actually a few creeks in sierra yll see 'em spinnin' out their lines with various degrees of success). Eastside sierra, you catch a few nice rainbow or brooks like around bishop (or really even lakes not far from LA), ice 'em and can eat back in Ellay the next day or so...(or...smoked...sabroso...)