Here's the Wiki lowdown on Chamonix, France--
Chamonix-Mont-Blanc or, more commonly, Chamonix (French pronunciation: [shah-moh-nee]) is a commune in the Haute-Savoie department in the Rhône-Alpes region in south-eastern France. It was the site of the 1924 Winter Olympics, the first Winter Olympics. The commune's population of around 9,800 ranks 865th within the nation of France. Situated near the massive peaks of the Aiguilles Rouges, Chamonix shares the summit of Mont Blanc with its neighboring commune of Courmayeur in Italy, and owns the title of highest commune in France. The commune is well known and loved by skiers and by mountain enthusiasts of all types. Mont Blanc, at a height of 4,810 metres, is the third most visited natural site in the world. This lends the area a notably cosmopolitan atmosphere. With an area of 245 square kilometres, Chamonix is the fourth largest commune in mainland France. 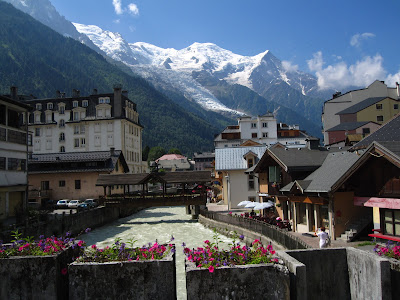 I've never been to Switzerland, but people I've known who've been there say it's a wonderful place, a fantasy of clarity and freshness. If you ski--which I don't do--that's an enormous attraction. Nothing like it, they say, zooming down white slopes with the cold air rushing by you.
Here's an alpine cocktail, which may summon up some of that freshness and uncomplicated grace. Thinness of air, crystal clarity.
Ingredients (by proportion):
3 Parts Polish Vodka
2 Parts Aquivit
1 Part St. Germain edelweiss liqueur
1 Part Barenjager (honey liqueur)
1 part Sweet (Yellow) Lime
Shaken hard and served up (with ice fragments floating on top).
Hopefully, some day I'll make my way to Chamonix, to see what they've been talking about. I don't plan to do any skiing, but maybe I'll hike up a little ways to sample some of that delightful pure air, imagining D.H. Lawrence, gasping for breath in his tubercular lungs.
Posted by Curtis Faville at 6:59 PM

Beautiful area...but Aspen for the French, more or less. At times Italia has claimed Mt Blanc, haven't they.

You probably read the PB Shelley klassic. Actually one line per 20 seems to work--superior to most poesia de pinche ingles ( the boy's name is still in register, wit'.... ἄθεος next to it)