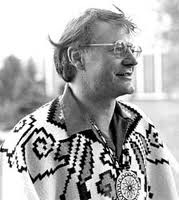 I return again and again to the early poems of Robert Bly. The photo above was probably taken in the early Sixties, when his first collection, Silence in the Snowy Fields, was published. It's a big, wide face, open, but with resistant, wary corners. Bly and I share Midwestern roots, and Scandinavian ancestry. My parents--all three of them--came from Wisconsin and Minnesota. They were farmers and railroad workers, graphic artists and classical singers. They had a blunt, purposeful attitude towards life, though they guarded their privacy, and believed in the value of seclusion and slow growth. I often think that, had WWII not happened, I'd have been born and raised in Wisconsin, and lived a very different life than the one I had in California. The war split my natural parents apart, and they never really got back together again. This is an imponderable thing. My Mother and Stepfather often talked about the Midwest, but they never went back, never, so the stories they told, and the kind of people they were, never were "confirmed" in my mind. This pattern of abandonment seemed a common trend in their generation. We were starting something new, like pioneers or exiles from an older existence. It was a clean break.
Nevertheless, Robert Bly's early poems, which are deeply set in the Midwest, its terrain and rural culture, speak to me in a way little else does. They're poems of loneliness, barrenness, simplicity, directness, loss, and often with Winter as a backdrop. You could say they evoke a kind of Scandinavian feeling, the coldness, the isolation, the close-knit folk network, the weave of the wool sweaters, the stubborn tread of heavy shoes on wooden planks.
Old Boards
I
I love to see boards lying on the ground in early spring:
The ground beneath them is wet--
Perhaps covered with chicken tracks--
And they are dry and eternal.
II
This is the wood one sees on the decks of ocean ships,
Wood that carries us far from land,
With a dryness of something used for simple tasks,
Like a horse's tail.
III
This wood is like a man who has a simple life,
Living through the spring and winter on the ship of his own desire.
He sits on dry wood surrounded by half-melted snow
As the rooster walks away springily over the dampened hay.
A man might feel so methodical and blunted in the gently rolling farmland of the Midwest that the simplest impressions and perceptions would feel like illumination. The Winters are long, and confining. Weather sets the pace, and one capitulates to it as to a higher power. Long days spent indoors, reading, dreaming, performing tasks. A resolution that grows out of necessity and enforced circumstance. Decisions arrived at deliberately, like blind intention that knows no alternative, and pushes dumbly forward, despite obstacles. I find myself craving this simplicity, sometimes, here on the West Coast where everything seems possible, but complications and excuses and distractions always seem to get in the way.
Approaching Winter
I
September. Clouds. The first day for wearing jackets.
The corn is wandering in dark corridors,
Near the well and the whisper of tombs.
II
I sit alone surrounded by dry corn,
Near the second growth of the pigweeds,
And hear the corn leaves scrape their feet on the wind.
III
Fallen ears are lying on the dusty earth.
The useful ears will lie dry in cribs, but the others, missed
By the picker, will lie here touching the ground the whole winter.
IV
Snow will come, and cover the husks of the fallen ears
With flakes infinitely delicate, like jewels of a murdered Gothic prince
Which were lost centuries ago during a great battle.
This isn't a great poem, but the quality of its underlying silence, its calm enumeration of event and observation, is completely characteristic of the place that Bly had found after several years of misdirection, of trying to write poems that mattered, that meant something. He talks, later in his career, about the effort to attain states of quasi-religious grace, that would permit him to speak through the spiritual language of imagery. But in these early, "regional" poems collected in Silence, there's a lovely directness which I find repeatedly comforting, like being forsaken to a life of total obscurity and pointlessness. The things which good writing can summon aren't worth half of what a clear perception is, experienced directly, and memorably. But the record of them can be cherished, like a pair of comfortable old slippers, sitting by a fire at night.
Posted by Curtis Faville at 4:30 PM

We all have different moods.

I've cranked out 421 essays over the last 25 months, which is almost 17 a month. Not every piece is going to probe the depths, and not every poet (and poem) should aspire to the summits of literature.

Bly's early poems are among the best of their kind, IMHO. I've spoken about them before. They don't push the boundaries of literary form, but they were not intended to. Bly's never been a formal innovator.

The Midwest vision that Bly adopted was shared by other poets in the 1960's--James Wright, Louis Simpson, Galway Kinnell, James Dickey, Denise Levertov, and some younger people like Greg Orr. He went on from there, to become the Robert Bly of today whom we all love and revere (just kidding).

But, hey, lighten up a little.


Trees now bare in air now cold
move a newly unobstructed horizon
farther back, past the pasture and the pond,
across that field, a view once blocked
by verdant growth now clearly seen
through open, empty branches,
all the way to Jack’s place and beyond,
to the farther trees, no longer green,
lined up now like thin, gray gravestones
against his fence line to the west.

Farther than the Summer sees,
with all its full and heat
and green opaque.
Sparse and spare, Winter has clear vision.

But Winter makes transparent more
than just the dead and wasting trees,
moves all horizons farther back
to distances which disturb, which we,
with so much more at stake, detest.
The cold reveals a farther tree line now,
one we’d rather not acknowledge
let alone observe.

Chopin, Stravinsky's greatest hits, or 'Trane and McCoy Tyner, or Frank Zappa's best bands on the other hand, does move me. Good musick doesn't f**k around. It either...rolls, or doesn't.

The only question now is which is better:

'Trouble Every Day' or 'Willie the Pimp'?

Hot Rats (which has WtP) is classic Zappa. He produced quite a bit of interesting music in the 70s--jazzy, and classical--Zappa more or less invented fusion (with help from Miles, maybe Chick corea, a few others).

Boulez's performances of FZ were quite tasty...and a bit superior to the Goishwin medleys of many urban orchestras or Brahmshoven nostalgia for that matter. The rock & funk seems a bit...skanky now but whatever. Compared to the usual narcissism of academic music (and Ahhts)...FZ seems nearly wholesome