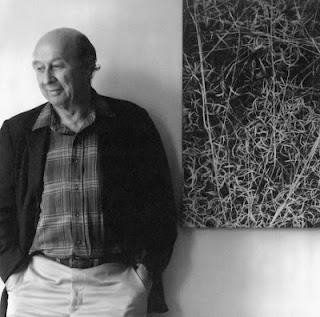 Harry Callahan [1912-1999] was an important 20th Century American photographer whose career spanned the entire post-WWII period. He began photographing seriously in the late 1930's, but his career really didn't get going until after the war. Self-taught, he went on to teach photography for many years, first at the Institute of Design in Chicago, and later at the Rhode Island School of Design (until 1977). Though he was associated early in his career with the work of Aaron Siskind, his work always showed a strong individual vision. He was always one of the least derivative artists in his métier, and in each phase of his work he blazed new paths for development.

Callahan was famous, if not notorious, for not furnishing aesthetic explanations or programs for his own work. Though entirely devoted to his art--he photographed almost every day--what he may have thought about his approach to subject matter, and the process he went through to attain his desired ends he preferred to keep to himself, despite the implied pedagogical obligation his teaching position implied. He was quoted as saying that a serious photographer should be able to make an interesting picture of anything, no matter where one was, and that one needn't go further than a few paces from where one sat or stood to find a good vantage point. This kind of reductive minimalist approach to the meaning of content seems to me quintessentially American. When Callahan visited Europe on a grant, he complained that it was "too photogenic"--that he "couldn't find pictures" to make. The notion of an unfinished or unripe visual reality is specific to the American mind, which thinks of an unsettled and undeveloped frontier as the crucial inspiring ground for exploitation. Europeans, in the era of exploration, may have felt something similar, but they didn't have cameras to record what they found and saw in the strange new lands they found. The idea of exploring reality as a given abstraction, without the associations assigned to it by society, history, aesthetic discipline, is a particularly American endeavor, and one reason for the revolutionary quality of so much successful American art in the 20th Century. 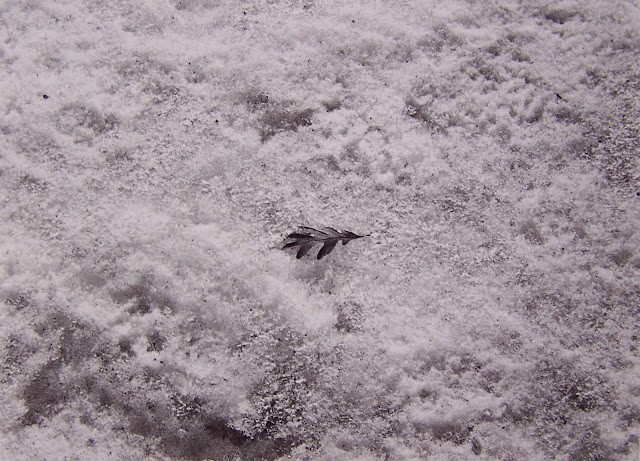 Like William Carlos Williams, one often has the feeling, looking at a Callahan print, that he is like Robinson Crusoe walking along the beach and seeing another human footprint for the first time after being marooned. Each fact, each event, each discovery acquires a significance far beyond its measure in a world fully occupied by humankind. There's a loneliness and isolation in most of Callahan's images, which enables the visionary eye to see things in their original wonder and simplicity, shorn of extraneous associations and habitual contexts. This kind of seeing is both a condition of innocence before nature, and a discipline that is rather like eastern mystical notions of a perfected state of attention and openness. And yet Callahan tells us nothing about any of this, preferring to let us attend to his images without any controlling or suggestive rubric. A critic is both free, and constrained by this lack of a surrounding aesthetic context. The denial of a precedent or methodology allows the image to stand alone, in isolation from history and associations. 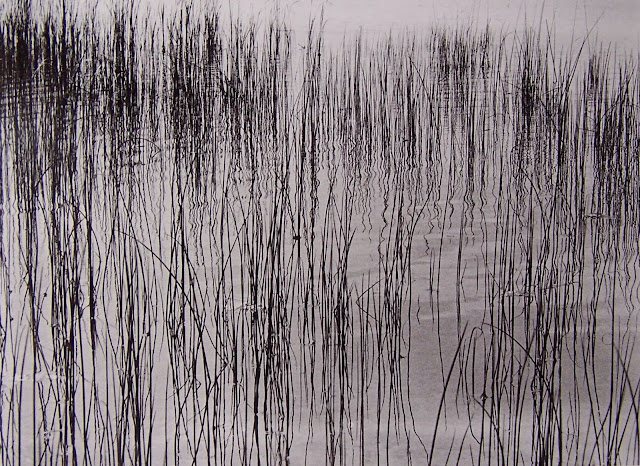 I like to think of Callahan's photographs as exhibiting a quality of controlled passivity, creating a kind of tension between the impulse to respond in a certain way to an image, and an apparent laxity (or relaxation) which the very quiet mood of his work permits. An apparent stasis or balance between viewer and scene, between opposing dimensions of the picture frame, creates a provisional unification of intention. Time stands still, in order that we may contemplate the poised impression of a specific bit (or frame) of reality. This original simplicity characterizes much of Callahan's best early work. 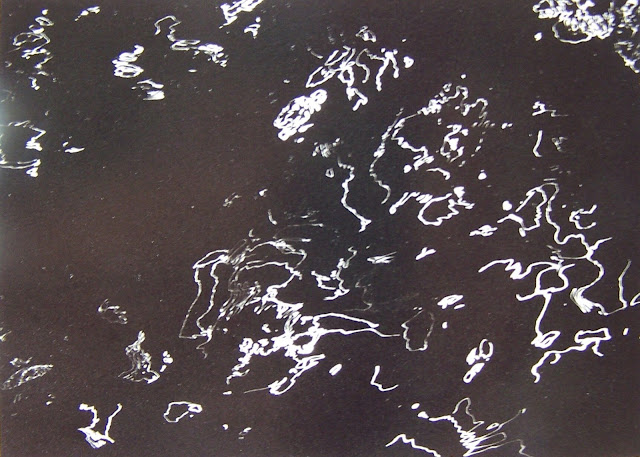 At first glance, a work like this early study of high contrast reflections on a water surface might seem like doctrinaire Abstract Expressionist work. But in the milieu of Callahan's other work, it stands out as a specific discovery amidst a series of unique moments. But unlike the elusive, fleeting "moment" as expressed in the work, say, of Cartier-Bresson (and/or other generic photo-journalists), this one doesn't stand on the candid delight of an elusive intention; it's chosen out of the great wealth of similar moments and stands as an example of a deliberate found instant--ethically neutral--a democratic particular chosen from the unlimited record of all such instants, none more value-laden than any other. An image type-cast from the Platonic array of possible form(s). Photography's great potential is to be able to imply and capture all this meaning in an otherwise inert visual template. Callahan's refusal to bridge the gap between the weight of his images, and the viewer's hunger for pretext, leaves a void which can only be filled with after-market critical additions. 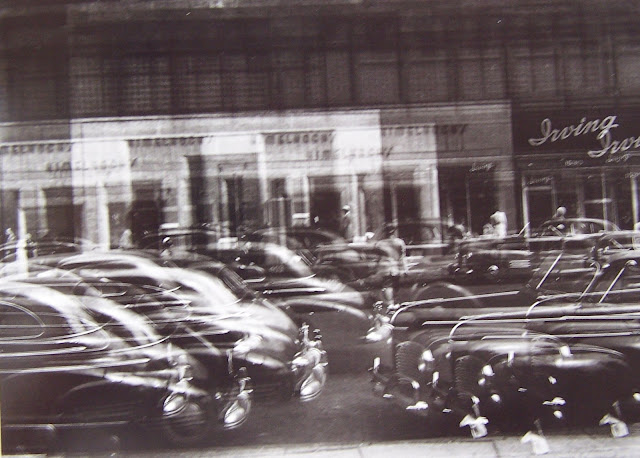 During mid-career, Callahan explored multiple exposures as a way of visualizing time and the meaning of repetition--which occurs most noticeably in mechanical circumstance(s). He manages here to imply all the variations in stepped occurrence possible within a segment (or passage) of an urban street scene. There's a kind of lagging fatigue which resists the drag of all these masses of metal through prostrate space. It's a mindless exhaustion of tedious appointments in eternity--yet it's the world we pass through on our respective numberless errands, so we know it must be real. Though the monotonous look of these vehicles is locked in the obsolescent imagination of 1940's auto design--an industry in which Callahan worked for some years prior to beginning his life as an artist--it speaks the same message to us today. Against the monotony of post-War America and its relentless capitalist expansion, Callahan sees in nature an idealized iconography, but without any of the meubles, or the trappings of erotic or religious baggage. His many and varied images of his wife Eleanor, describe an intimate concentration that amounts to a kind of aesthetic obsession. 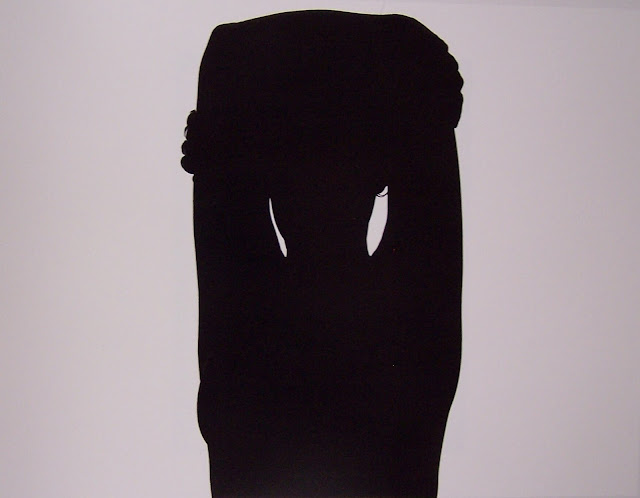 The mood in these studies is one of abiding intimacy and affection, the nudes are almost religious in their intensity and focus. In the image below, Callahan has made what is known as a contact print. That is, the frame of the negative is entirely filled from the image projected through the lens; there is no "cropping" or adjustment of the frame. In other words, what he composed through the back of the camera is exactly what was printed on the exposed negative in the film holder at the back of the camera. There's an implied directness and completeness in the making of the image, and a total sufficiency to the process. Everything is deliberate; nothing is left out. Nothing is left to chance or later adjustments. This directness is part of Callahan's purified, hygienic approach to image-making. 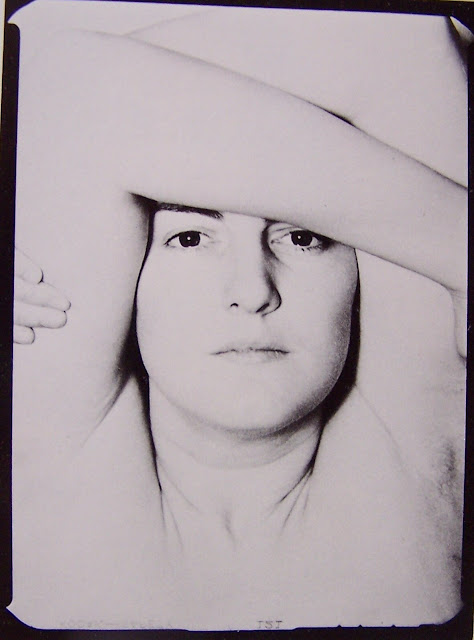 Callahan's intense concentration on the intimate facts of his own family life has no counterpoint in the rest of his published or displayed work. There's a cleanliness about this that is almost Puritan in its nature. There is nothing vicarious about Callahan's work. Seeing his pictures of his wife is like looking through the eyes of Adam in Paradise, as Eve first appeared to him. In one of his canonical images--which has been used in various venues over the years--is this other-worldly picture of Eleanor submerged in the waves of the Great Lakes. The face is striking not just for the iconic, classic lines, but as a result of the closed eyes, and the gently undulating dark tresses of her hair, which partially cover her upper trunk. She's like a mermaid, or a sea nymph rising out of the ocean. Her implied somnolence suggests a birthing, or a trance state. She's like some ancient goddess or symbol of feminine power seducing us into the water, or to some fantastic idyll. 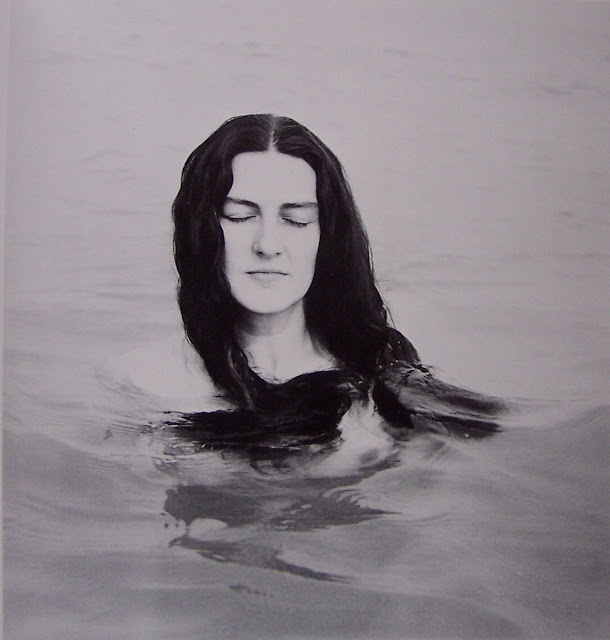 And yet it also has a kind of plainness and simplicity which belies all that myth-making. She is just a woman, elevated in our regard to a position of inspired visionary illumination. If woman, in the guise of Eleanor, is the love goddess of pre-history, then nature, or the forms of the universe as we're given to know it, has its own seemingly baffling designs. 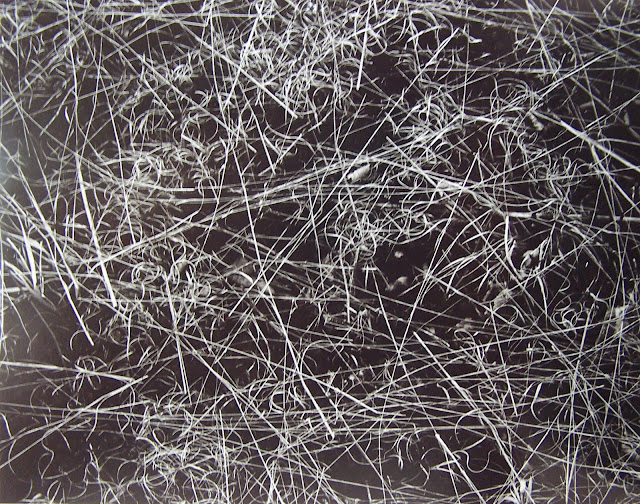 Callahan's nature studies have none of the picturesque qualities ordinarily associated with classic landscape photography. They're nonetheless totally aesthetic, not scientific, not inspirational, not "ideal," and not unique examples. Again, they seem almost random as subject-matter. And it's the tension between the ordinary subject and the photographer's opportunity which gives them their common astonishing quality. When Callahan wandered in nature, it wasn't the striking gnarled tree trunk that caught his attention, or the swirling mass of a thunderhead, but the jumble and chaotic mass of twisted grass stems he saw at his feet. Recognizing immediately how photogenic this composition would appear in black and white, he pointed his camera down. That moment was a metaphysical realization whose implications were greater than any feeling we might have about the heroic character of inspired landscape views. And the form these stems have bears the same relation to the meaning of nature, as a specimen on a slide under a microscope. The formal qualities exhibited in it have the same indelible immanence as an equation--a revealed truth laid bare. 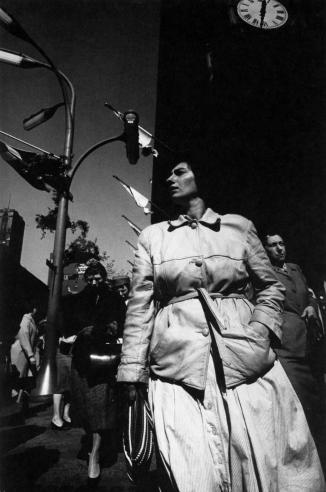 And yet the impression you are left with in Callahan's work isn't complexity and contradiction and confusion, but clarity and passive acceptance. Even when the subject may be the harried expressions of commuters on an urban street, the feeling we have is not intrusion, or shock, or dismay, but a sense of random impulsiveness to which we're only casual witnesses. Callahan's range is a good deal more varied than my own partial appreciation might suggest-- 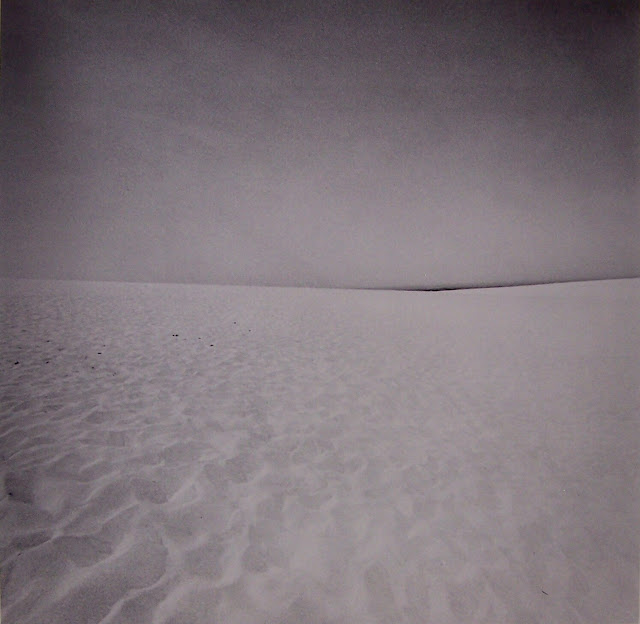 --but for me, the power of his vision is best expressed where his control over the event within the frame of the moment and the whole picture is most complete. To make something new out of a built scene requires a transformative process that accepts the implications of pre-existing man-made environments, while seeing into or beyond them to an unsuspected vantage. But when he confronts nature, the original purity of his approach is preserved. Within the universe of possible scenes, there is a vast limit. We are both a part of, and apart from, the universe of light to which we belong. The photo above could be of a Mars landscape, and yet if it were, the implication of the thin dark line, compressed by the gradations of wind-blown sand, would be measurably the same. In one sense the picture is "empty"--the sky presses down upon the land, and the dark sea is "squeezed" into a thin strip, barely visible. The earth's spherical curve disappears just beyond our reach. It is like the first view of the sea by a land-bound being, or of a newborn baby turtle "returning" to the sea its ancestors left to deposit its egg. 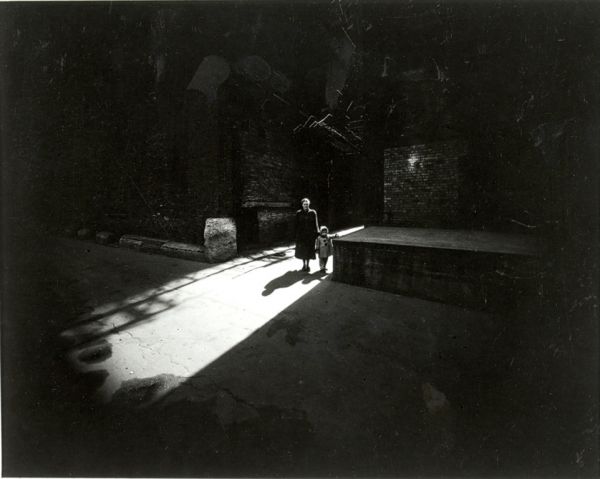 Humans stand in the light of the sun's angle, and are forever held there in a timeless relation to the folded infinity of such moments--possible, realized, or dreamed. Life is fleeting, and transient, and elusive, and unverified without a record. It happens all around us, with or without notice. We are its only witnesses. 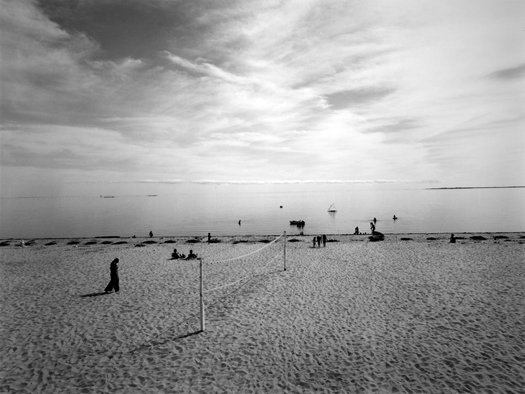 a position of where everything works to get that

"allows the image to stand alone, in isolation from history and associations."

I was thinking poetry and then you bring in WCW... nice move.

refreshing to see or read images minus the present demand for all of that boring bourgeois subjectivity
that is dominating {everything} especially what / who I call Credentialists are doing.