I don't know why cocktails are associated with ladies. A lot of them are named "ladies" as if an alcoholic drink could be considered an intoxicating abstraction. Perhaps it has to do with the tradition of attempting to seduce a lady by getting her tipsy. Or perhaps, more innocently, it refers to the sense of style or panache which going out with a lady dressed in her sexiest outfit inspires. Jazz pieces, by Ellington, say, are named as if they were cocktails--e.g., "Sophisticated Lady." In the 1920's, the heyday of the cocktail, drinking and jazz were closely associated. The music was naughty in the same way that the illegal drinking was. And maybe the sex was considered just as naughty. In a more permissive society, such forbidden pleasure doesn't carry quite the same caché, which may be why cocktails aren't as exciting as they were once. 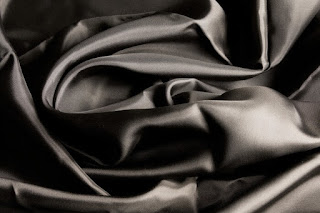 I'm not a big fan of Violette liqueur, but in the right proportion, and with the right accompaniments it can be a winner. As a flavoring agent, it combines nicely with other fruit hints, and in gin drinks it can be very subtle, though its intense purple color may turn a drink grey (instead of merely violet). 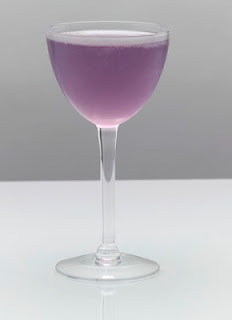 Mixing cocktails is nothing more than cooking without heat, though there are a few "hot" drinks you can make. There are even alcohol-free concoctions, for those who can't (or won't) tolerate the sauce. And there are as many different kinds of bar-snacks as there are drinks. But most people aren't adventurous enough--they know only a half-dozen cocktails, and always order those, instead of considering alternatives. This one's a charmer, take my word.

--served up in a cocktail glass chilled to a frosty white.

Lift up your skirts, ladies, we're passing through hell.

Posted by Curtis Faville at 8:11 AM