Sand dunes are much more complex than you might realize.

I've spent many an hour trudging across dunes, looking for interesting photographic compositions. These three prints are from those I took in the late 1980's and early 1990's, from large format negatives.

Photography is about the play of light and dark, or the range of tones from totally light (or white), to totally dark (or black). Sand dunes present a palette of rich contrasting tonal range which is fascinating to the camera eye. Dunes are (like) an abstract of the logarithm of light's variation upon an undulating material reflecting surface.

Sand is particulate, allowing it to be moved uniformly into shapes upon the land, governed by the physics of gravity, balance, and the shifting force of the wind. Dunes are constantly unsettled, undergoing continuous alteration. The poetic metaphors for the shapes and shadows of moving dunes are highly suggestive. The sharp edges of the crests and ridges of dunes produce dramatic angles, evanescent impressions, fragile and elusive.

Sand is composed of tiny particles of glass, broken up into nearly uniform units. It's astonishing sometimes to think that dunes are huge fields of broken glass. We usually think of broken glass as an unpleasant thing, dangerous, troubling, a nuisance to be swept up and recycled or thrown into landfills. In our new age of conservation, glass gets to be reused. Glass blowers use a very pure form of sand, melted down to make consistently clear glass, which can be tinted in any color. Green bottle of blue bottle flies seem less common around here (in the Bay Area). Maybe I don't spend as much time in places where they tend to congregate. You do find flies in dune fields, as well as small mammals, reptiles, and the occasional human.

There is a quality of abstraction about sand dunes. A naked dune, without any flora or fauna to impede the view, is like a mathematical equation, clear and unambiguous. A dune is like a pure formula of matter, laid out in perfect display for the mind to contemplate. Like a canvas upon which the wind sculpts waves, scallops, shoulders, smooth curling fins and sails of painted light. Photographing dunes with a large format camera, in the early morning or late afternoon light, one is right on the vivid edge of the ultimate visual pursuit, as, moving restlessly from point to point, the endlessly mutating view seduces you over and over until you discover one, almost by magic, which organizes into an exciting composition. The dunes seem designed as photographic raw material, and don't move, the way water or tree branches or people do. 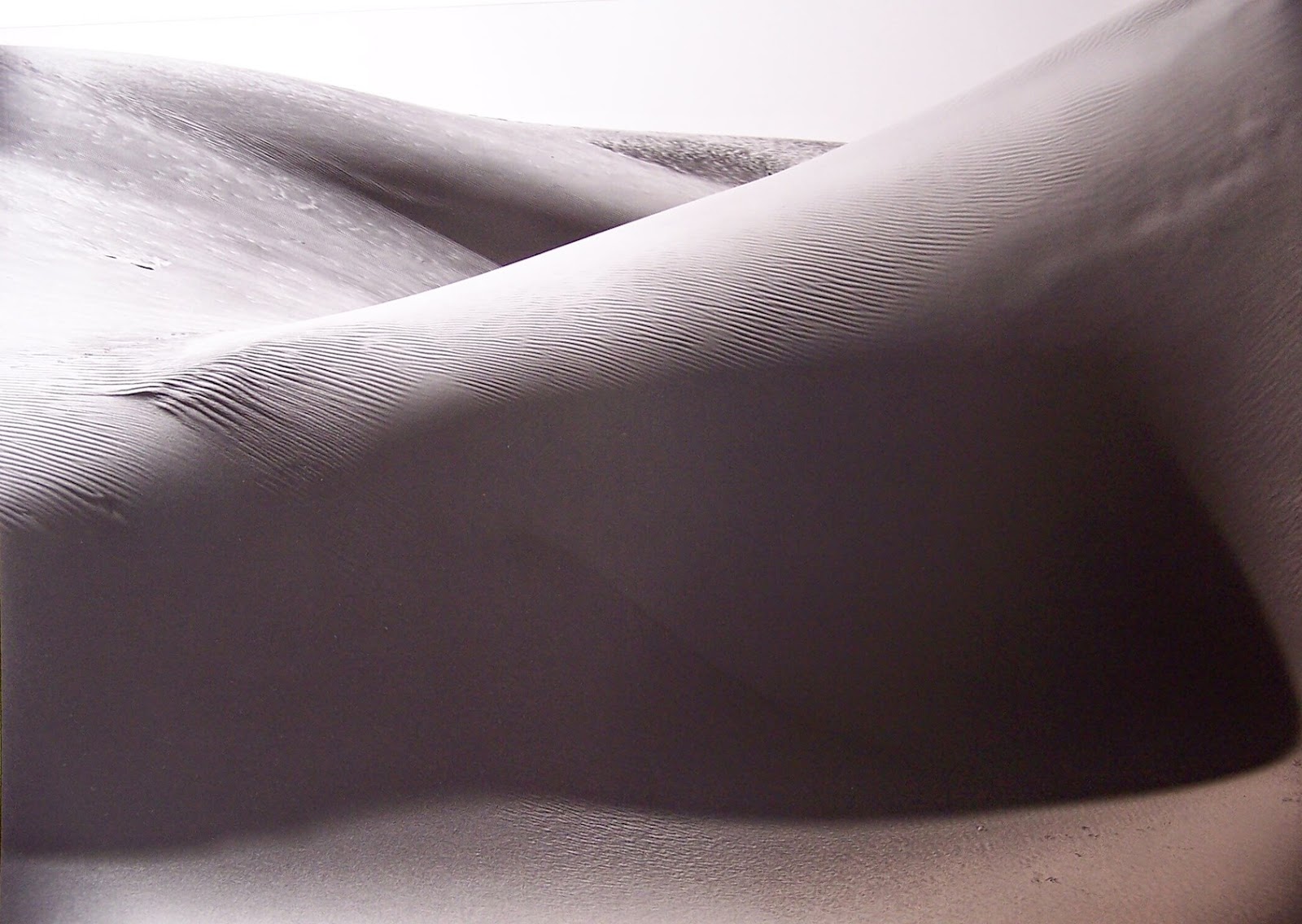 There is a whole science of dune shapes, and of the behavior of dunes, under varying conditions of wind. There are even underwater dunes! I think people photograph dunes for the same reason that they photograph nudes. Human skin may appear as smooth and abstract as sand, and under contrast-y light conditions, may arrange into very similar kinds of abstract shapes. There are also of course nudes on dunes. The thing about sand, though, is that it tends to stick to skin, especially when it's sweaty, and there's the problem of the disturbance of smooth sand by walking into a composition. I suppose you could use a portable blower (or wind machine) to "dress up" a fashion shot. In the movie Zabriskie Point [MGM, Antonioni Director], the actors Mark Frechette and Daria Halprin roll around in the sand at Death Valley, making love and being liberated. Both these actors were amateurs. Antonioni had discovered them in his travels around the U.S., experiencing "culture shock" while looking for likely suspects to play in his movie. The two actors had an affair during the production, and ended up living in a commune in Boston. Halprin was the daughter of the Bay Area Landscape Architect Lawrence Halprin. She later was married to Dennis Hopper, and eventually ended up as a new age expressive body arts instructor at her Tamalpa Institute in Marin County, California. Such a distinguished lineage! Frechette, who'd been a bit of a flake all his young life, tried robbing a bank in 1973, a few blocks from the Boston commune, and was eventually caught and convicted, dying in prison under slightly mysterious circumstances, when a barbell he was lifting, pressed against his neck, choking him to death. What all this has to do with dunes, I don't know, but it's all true. 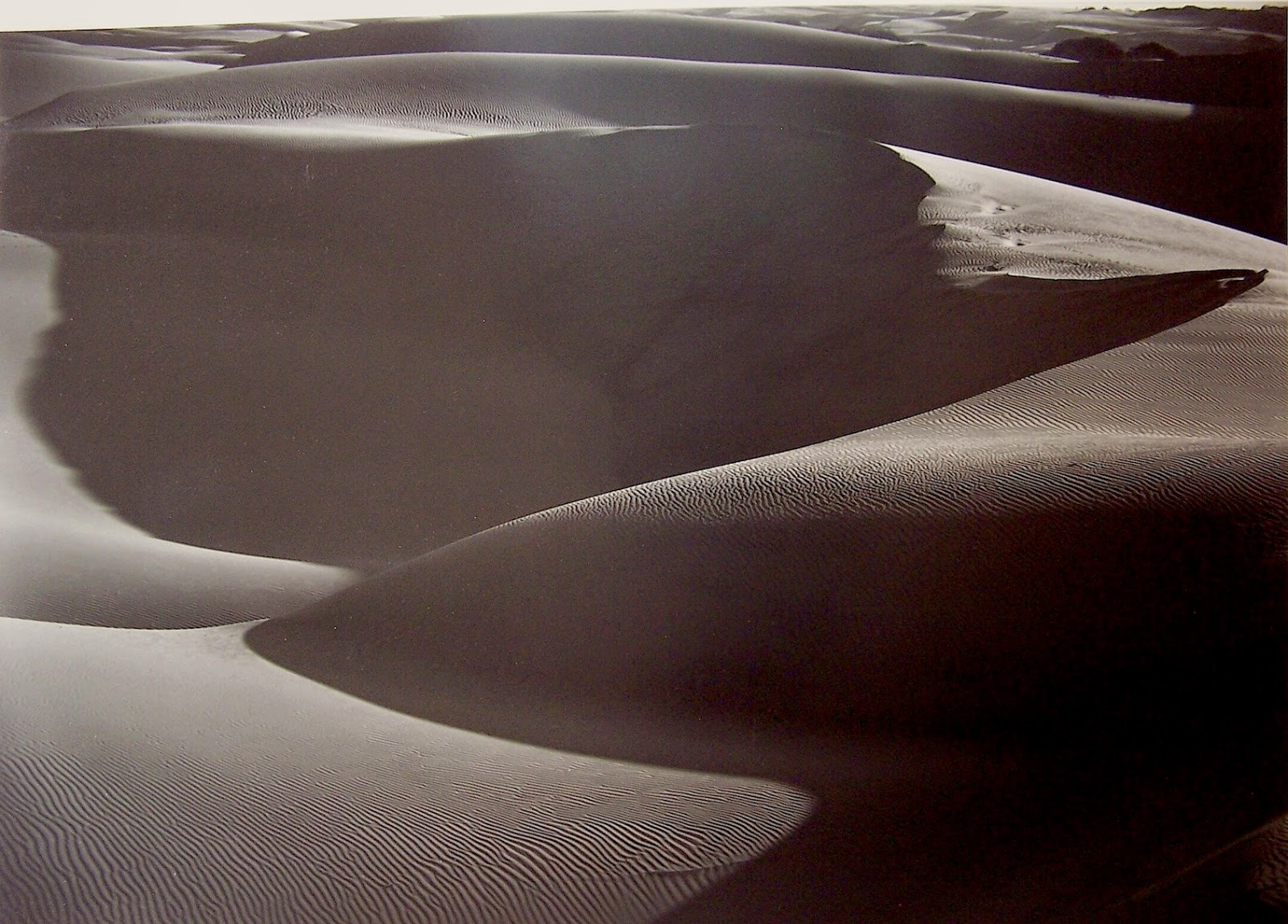 A large dune field is known as an erg. That sounds like something invented by a science fiction writer to describe an alien technology. According to Wikipedia, an erg is also a unit of energy, equal to ten to the minus seven joules. A joule is a unit of energy or heat equal to the the work produced by applying the force of one newton through a distance of one metre. How we get from dunes to ergs, joules and newtons is another of the mysteries of intellectual wandering. Later today I'll be spending time at the club gym expending my ergs on the static walking machine, pushing newtons across the metered expanses of imaginary space. The more calories I burn, the more ice-cream I get to eat after dinner. One of the constants of my adult life has been Haagen-Daza coffee gelato. It's one of the few things I can count on. It never disappoints. Who gives a fig about math, anyway?

Thank you for taking my call.