The End of the World

John Martin [1789-1854] was an English Romantic painter. Very popular in his day, he specialized in apocalyptic scenes such as these (below), which showed an Old Testament feeling about mankind, God, the universe, and the vicissitudes of existence.

Most of Martin's big turbulent canvases I've looked at feature a familiar theme--a great fiery cauldron into which earth and mankind are either being swallowed up or threatened with impending incineration. This is represented either as "God's wrath" or the work of a pitiless infernal influence, the inevitable consequence of humanity's sinfulness--visions of mass destruction and the end of the world.

The 19th Century was dominated by what are now described as "Scriptural Geologists"--scientists or theorists who tried to reconcile the universal concepts of Christianity with the new science of geology. They hadn't yet begun to understand vulcanism and plate tectonics, so they were basically free to imagine that the devastating eruption from Mount Vesuvius in 79 AD was a phenomenon generated by a supreme deity. Pompeii was guilty of decadent and conspicuous indulgence, and ripe for punishment.

Religion has often used fear and loathing to scare its adherents into obedience and conformity. And the Victorian Era trembled under the apprehension of an angry deity.

In Martin's colorful vision The Great Day of His Wrath, we see humanity and cities and whole sections of the earth's crust blasted up and tilting into the crucible of melting matter.

We now know that vulcanism is a clear expression of the instability of the planet, where molten elements periodically leak upward through the earth's crust, through cracks in the seams of the huge tectonic plates, which migrate slowly, in geologic time, round the unstable surface. We know these eruptions occur naturally, through the process of continuous formation and deformation of the hot matter beneath. But Victorians--who had no real understanding of larger geological forces, or of the vast spectrum of time involved-- were free to speculate about imaginary causes and meanings.

The popularity of Martin's holocaust-like pictures is a testament to the fascination people had with frightening nightmares of their own jeopardy. It was fun to look at pictures like this. Today, people still have intense curiosity about large, terrifying events, such as hurricanes, floods, earthquakes, tornados, though we no longer see them as manifestations of destiny or the will of the gods. There's no one to blame for these things, so we have to treat them for the periodic and inevitable occurrences they really are. 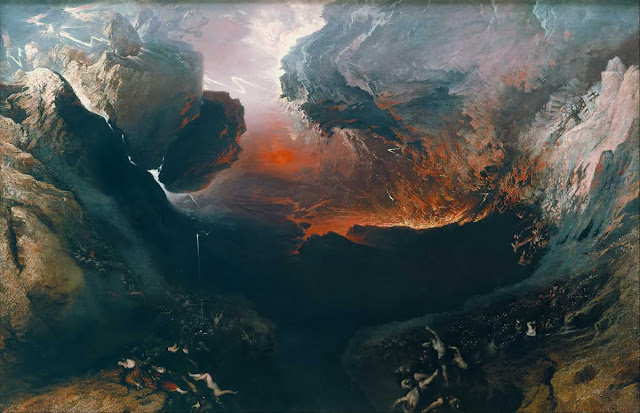 John Martin The Great Day of His Wrath 1851-3
(To see these images better, drag them onto your desktop, and expand them onto the screen.) 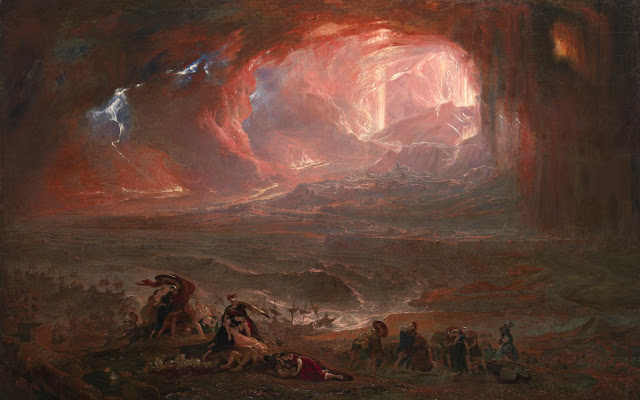 The Destruction of Pompeii and Herculaneum [1822] 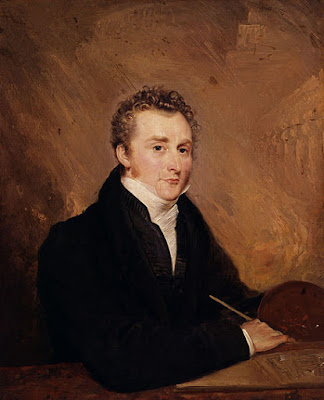 Today, however, we've come to the realization that our affect on the earth's weather has become nearly catastrophic. As global warming progresses, the seas rise, and drought covers vast areas of the land masses of continents and islands, we'll be faced with the consequences of our own mischief in offending the chemical balances of the atmosphere, resulting in catastrophic changes in weather, the seas, and the ice-caps. As if garden-variety pollution hadn't done enough damage, now we're looking at a compromised planet, much less hospitable to all life, than we had come to imagine it just a century or so ago.

In a very real sense, the moral imprecations of the 19th Century are being revisited upon humanity today, though we have only ourselves to blame, not an angry god. It isn't, after all, our profane indulgence in sex or crime or persecution which is the fault, but our presumptions and negligence about the natural world at large. The earth, which once seemed so large and unconquerable and inexhaustible in extent and largesse, we now know is vulnerable in its fragility and finite limit(s). We've offended Mother Nature, and she's unlikely to take the offense lightly.

Written not long after the end of World War I, Archibald MacLeish's famous poem The End of the World presents a piquant, ironic and surreal take on the fatalistic crisis of consciousness familiar to poets and novelists of the time (1920's).

The End of the World

Quite unexpectedly, as VasserotThe armless ambidextrian was lightingA match between his great and second toe,And Ralph the lion was engaged in bitingThe neck of Madame Sossman while the drumPointed, and Teeny was about to coughIn waltz-time swinging Jocko by the thumbQuite unexpectedly to top blew off:And there, there overhead, there, there hung overThose thousands of white faces, those dazed eyes,There in the starless dark, the poise, the hover,There with vast wings across the cancelled skies,There in the sudden blackness the black pallOf nothing, nothing, nothing -- nothing at all.

Just in case you were wondering, Vasserot is probably a made-up name, though Ferdinand Vasserot was a French bicyclist who competed in the 1900 Summer Olympics. The poem seems to describe a circus, inside a big circus tent, in which various figures are performing feats and tricks. Vasserot the armless ambidextrian, Ralph the Lion, Madame Sossman, Teeny, Jocko are figures in a madcap troupe and the "thousands of white faces" are the audience. Quite unexpectedly, the top of the tent blows off--something that might actually happen--revealing the big dark night sky overhead. The "vast wings" might be less literal. The "sudden blackness" might be said to represent the "nothingness" of the universe, or the meaninglessness of existence, the larger context of infinite space, beyond mankind's imaginative powers.

MacLeish responds to the new cynicism of the Lost Generation with a half-serious comic salvo. Though he is usually included with Eliot and Pound among the high modernists, his career took him away from aesthetic disengagement. He had a career in law, which he gave up to write. Returning to America,  he worked as a journalist for Fortune magazine. Later, he served as the first de-facto American poet laureate (called then the Head Librarian of Congress), and still later inside the precursor of the CIA during WWII. He also became a successful playwright.

MacLeish presents the case of a figure torn between tendencies. Sympathetic to Communism during the 1930's, he worked as a propagandist during the Second WW to promote the cause of victory. Stylistically, he's now regarded as an imitator--particularly of Eliot--and his poetry has not stood the test of time. He may have thought of himself as an innovator, but that seems less and less so today.

His poem is notable for its fragmented phrases, and the sense of coy surprise, but the repetitions seem more hackneyed ("there, there overhead, there, there" "blackness . . . the black pall" "nothing, nothing, nothing -- nothing at all") than inspired. It's almost like nursery rhyme. It's a novelty, which perhaps suits the clever cunning of its method. Read for the first time, it leaves an indelible impression, which palls with each successive reading. This is a quality which he shares with E.E. Cummings, of a specious playful inventiveness that is short on conviction. It usually comes off as gesture.

The poem is sufficient unto itself, and demands nothing more of us but mild amusement, though it purports to carry a much larger message. In the context of his whole work, it often happens that an inferior poem or composition comes to occupy a much larger place than it deserves, and overshadows more ambitious and laudable efforts. Novelty pieces like this can actually hurt a writer's reputation. 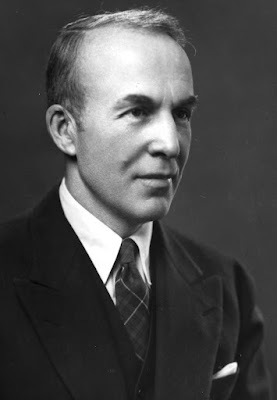 Posted by Curtis Faville at 1:26 PM No comments:

Prow of the Viking 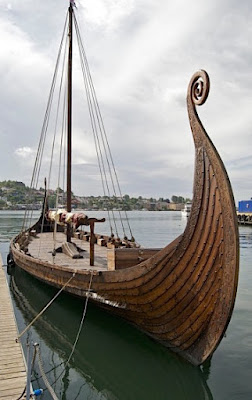 Who knows whether one of my distant ancestors, originating in Norway, ever sailed in one of these boats--to England, Greenland, Russia, or perhaps even the Northeast corner of the North American continent in the days before Columbus? Who knows whether they drank some kind of home-brew? Akvavit or aquavit has been produced there since the 15th Century, but I'd bet they were tossing back something equally strong long before that. One of the marks of civilization is the invention of alcoholic beverages, which are believed to have existed as early as six thousand years ago.  Various fermented mixes of grape, grain, herbs and honey have been consumed in various parts of the world for a very long time.

This concoction, which features aquavit, reminds me a little of the North Sea, bracing with sea air and a slight chill, though this may just be my vagrant imagination at work. By itself, aquavit may have a slightly sour/nutty taste, which is moderated by the gin, in this case a specific kind, produced locally by the St. George firm--a bit dryer, and spicier than usual. Lime juice tightens it up further, and the odd combination of violet flower, peach and cherry may resemble the kind of flavor combination favored by some of the ancients. Since they couldn't have had a way of measuring the alcoholic content, except by judging its effects on their bodies, approximating its actual strength wouldn't have been possible. For my purposes, weighing and measuring the flavor factors is much easier than it would have been for them.

This combination makes two cocktails, shaken and served up in frosted glasses.

Posted by Curtis Faville at 5:51 AM No comments: