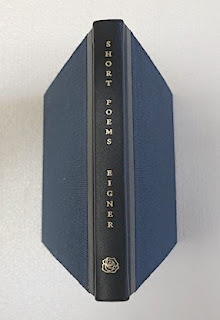 After years of meticulouly editing all of Eigner's poems, to be presented in Courier (typewriter face) type, based on his accurate typescripts, I decided that I'd like to design and edit a selection of his shorter poems, both as an expression of my taste, as well as an exercise in fine press typography and binding. deliberate stillness / in winded birds is that book.

The title is a line from a poem that is not included in the collection. I see it as an exquisitely crafted poem in itself, rather haiku-like. Though the selection is not technically "minimalist" it does emphasize poems of just a couple or three lines in length.

There's always a danger with very short poems, that they will descend into punchlines or jokes. Certainly there are a couple like that in this selection, but only for comic relief. Eigner's poems are meditations on perception, and phenomena. Sometimes they are instantaneous, rather than ruminative. The book is unpaginated. There are 70 poems, one to a page; followed by my brief editorial post-face. Limited, as the colophon states, to 75 numbered copies. Oblong format. A few will be gifted to friends of the publisher, the rest will be for sale at $200 per.

Eigner was prolific. This small selection may serve as an introduction to his work, if any were needed, a juicy tidbit of the whole. If you enjoy this kind of craft, there are few things more enjoyable than making a book, from beginning to end. Guiding it out toward the middle of the pond. 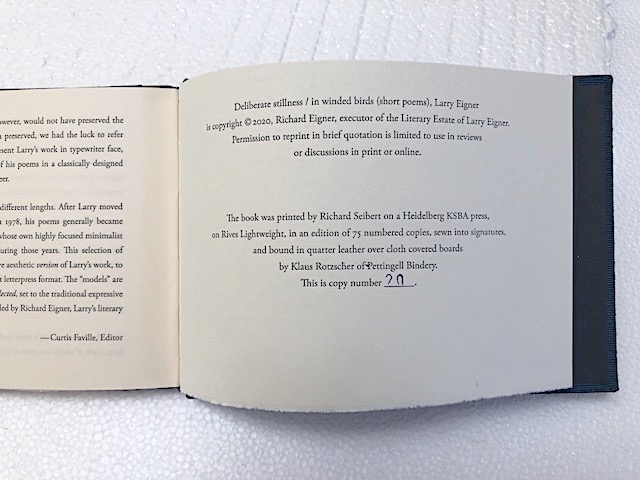 Posted by Curtis Faville at 7:30 AM No comments: