I just discovered that an old friend of many years passed away in January. The Berkeleyside obituary is here.

I first met Goodwin in about 1963 or 4. I was just a high school junior then, visiting Berkeley friends for a weekend. My immediate family associate was managing a little coffee bar called The Florentine, on Shattuck Avenue in Berkeley. Laurette Goldberg was performing on the harpsichord there, and anyone who loved the harpsichord specifically, or keyboard performance generally, would come to hear her play. Goodwin was among them.

By the time I met him, he had already become a well-known performer and teacher of the piano, but Goodwin was the least pretentious of men. A gentler, sweeter, more intelligent man would be difficult to find. I was just then becoming interested in classical music, and had begun to take serious lessons from another teacher in Napa, where I grew up.

Much later, after I had returned to the Bay Area from graduate school in the Midwest, I ended up managing a pair of apartment houses right next to Goodwin's place on Francisco Street. I had a baby grand, and Goodwin could hear me playing as he walked by to his house. We rediscovered each other then, and remained in regular touch for the rest of his life. Though we moved away to Kensington in 1976, we saw him frequently in Berkeley.

Goodwin didn't own a car, and walked everywhere. He also didn't have hot running water in his house. He had other eccentricities and habits. He always lived alone, and seemed not ever to have had a long-term relationship with anyone of either sex. He told me once that he had been a programmer in the early years with IBM, and they had offered him lots of money if he would stay on for advancement, but Goodwin had music in his soul, and he threw that career over to become a self-employed piano instructor. 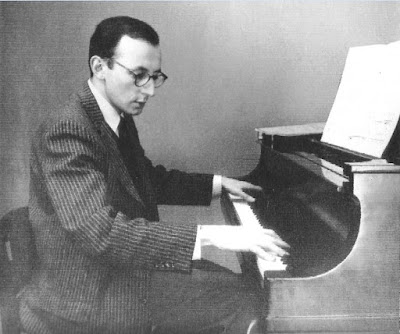 It was clear that Goodwin had honed his needs down to essentials, and he lived quite comfortably on an income that was probably much less than most people might have guessed. He dressed well, had impeccable manners, was typically deferential, but always delightfully sunny and alert.

Well into his 80's, we would see him walking on Telegraph or Shattuck, usually with one of his wool hats, to keep the sun off. He usually didn't have a lot to say, but if you pumped him a little, he would engage with you freely on a host of subjects. 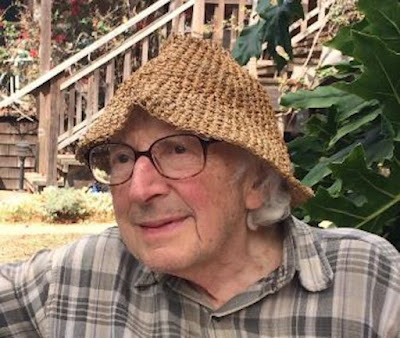 Though I never took lessons from him, he gave me a few pieces of great advice on how to improve my playing. One I took to heart was--unlike what I had been told by other teachers--one should relax one's fingers when playing, instead of curling them rigidly and trying to maintain a fixed position over the keys. He would hold his hands, hanging from the wrist, to demonstrate this. It worked, and though I never played for him, I always appreciated the tip.

I only heard him play once, in public, and that as an accompanist. Could he have had a successful career as a classical performer? I'm not sure. It may be that he lacked the intense drive required to compete and bear the stress of it. Perhaps it just didn't interest him. There seems little doubt that he had the facility. The life he did lead brought joy and pleasure to many people, and there are generations of students of the keyboard whom he influenced or husbanded into prominence.

The last time I saw him--just a few weeks before he died--he was being helped out of a car in front of his house. Despite the inconvenience and embarrassment, he smiled and tilted his head ruefully, promising that he would be happy to entertain a visit when he was feeling better.

Goodwin was a character, the sort of person you don't meet often. A very special man. I miss him.