A Walk in the Woods


For a long time, I've wanted to write a poem about an experience that was very vivid in my imagination, but which I've never quite figured out how to do.

As anyone who has ever camped in the outback (or wilderness) knows, when there are no "facilities" you just have to find a private place to relieve yourself.

I can still recall, as a boy going camping, the eerie sense of isolation and spookiness I had when I walked some way out of camp, far enough away that I'd have privacy, a sufficient distance away that I wouldn't disturb others and stink up the place. In the forest, you don't have to walk very far to feel totally "lost"--away from civilization and the comforting sense of protection.

This is naturally an experience that our ancestors undoubtedly were very familiar with, before the invention of technology. For tens of thousands of years, people have been finding a convenient tree or shrub, some distance away from camp or settlement.

People rarely talk about this, but it's something humans and animals have done for a very long time, but which we now hardly ever experience or think about. 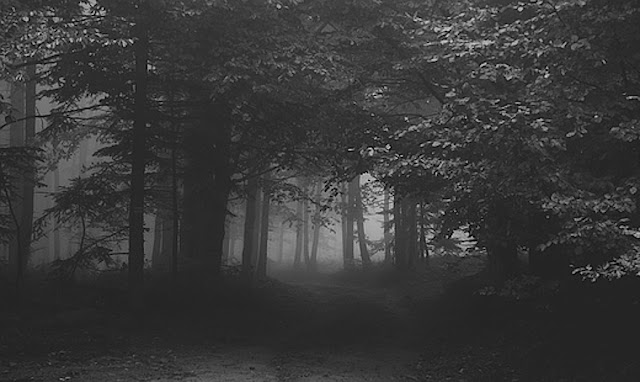 I remember peeing onto the forest floor, or against a tree trunk, where my stream hissed among a carpet of pine needles or mossy detritus.

But what I most remember is the silence, the strange listening calm that pervades a stand of timber in the wild. It can be a little frightening.

For eons, people have been venturing out into the unknown, where predators or strangers may be lurking. Animals share this same foreboding, the sense of vulnerability, of being subject to surprise or attack.

Our world once was an immense place, largely untracked, unexplored, unsurveyed, unknown. Out of such unknown-ness grows apprehension, and superstition.

When I was teaching once years ago, I had a student who had recently returned from soldiering in Vietnam. He'd been a radioman, who went on patrols with his platoon, often in dense jungle. He told me once about an experience he'd had. He'd needed to take a crap, and had walked a short distance from the bivouac. Squatting beside a downed log, he heard the approach of enemy soldiers--Viet Cong soldiers--just a few yards away. "I dove right into my own shit," he recounted, and he lay there, as quiet as he could, his heart pounding, his breath pumping, as the enemy patrol passed by. They never saw him.

The poem I'd want to write would capture the sense of silence, isolation, and vulnerability which must be a common experience for millions and millions of people in our ancient history, but also the beauty of being in nature, attuned to its sounds, shapes, relationships; the way Indians once must have felt it, knowing its familiar keys, recognizing its signs, the aliveness of inanimate things--rocks, trees, water, wind, creatures. The title might be "going out into the woods to pee" rather in the way an ancient Chinese poet might describe it.

There is sometimes an "entry" into a poem, that allows you to carry it through. But I haven't found it yet. I may never--one of the ideas for poems that may simply never happen. It's a little frustrating. But on the other hand, it's a "poem" in my head, one which I have the experience of, even if I haven't found the words, the sequence of statements to capture it yet.

How many unwritten poems have mellowed or ripened in the minds of men, without ever having been captured? Before writing was invented, they may simply have been stories told around the fire. Or perhaps only known as memories.
Posted by Curtis Faville at 10:16 AM No comments: 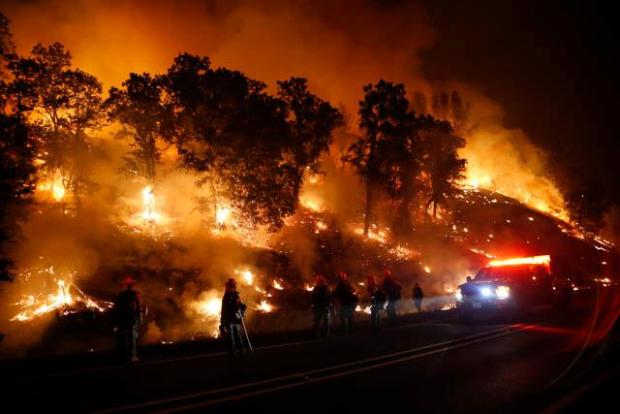 We're all familiar by now with the cluster of fires which have ravaged parts of Northern California over the last 10 days.

Like most people, I have a feeling of futility about the damage that has been caused, since the manner in which the media usually portrays such events, seems intended to create in the viewing public either a sense of hand-wringing empathy, or pointless indignation over causes and mitigations.

I have three observations about the event. What I'm saying here doesn't in any way suggest that I do not have sympathy for those whose lives or livelihoods have been hurt or affected by tragedy. On the contrary, it's because I DO care that I make these observations.

One: I think it's irresponsible to assume, as nearly everyone has apparently, that these fires, which began, suddenly, all at once, on Sunday the 8th of October, were the result of electrical accidents. I believe it's much more likely that some, if not all of the fires, were the work of arson, set by a mentally deranged individual, driving quickly from location to location, and igniting them in sequence. Though the "investigations" into the causes will likely take months to complete, I think the likelihood of their having occurred all at the same time, in the same general region, goes well beyond chance or accident. We'll know eventually whether my surmise is correct.

Two: Most of the fires that occur outside of large forested regions (and a few that happen inside them) usually begin close to roads or contact points. In other words, they don't begin "naturally"--they begin as a result of human error, or deliberate mischief. All such fires begin small, and grow bigger. Typically, the response time for sudden, unexpected fire events is relatively slow. Our response to such fires is scaled to the "immediate" threat they pose. Inevitably, it often seems, such small blazes "quickly" spread, engulfing hundreds of thousands of acres. By the time they've grown, they have become enormous events, requiring the coordinated action of different jurisdictions, and the probable loss of flora, property, and even peoples' lives.

We hear a great deal about how courageous and hard-working and sacrificing our fire fighters are, about the vast resources marshaled to deal with these huge fire events. What we don't seem to hear about is how efficient such responses are in preventing small fires from becoming larger ones. What, to be very direct, would be the value of responding with greater efficiency and force to new small fires BEFORE they were allowed to grow into large ones? A small grass fire which starts beside a well-traveled road in a semi-rural area seems a small matter, perhaps involving only an acre or two. But left alone, untended, such a fire can eventually turn into a major disaster, simply for lack of attention. What if our fire authorities descended on such "small" fires with greater speed, and resources, BEFORE they became unmanageable? The crucial point of intervention is EARLY in the process, NOT later when things have gotten completely out of hand. 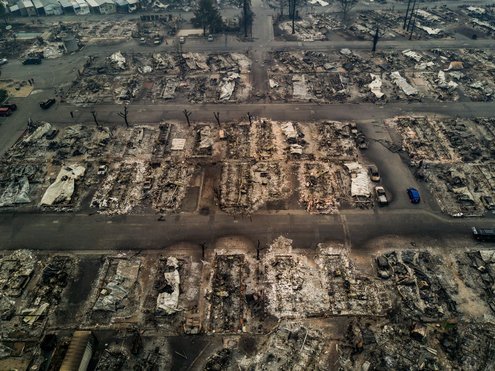 Three: A lot has been made of the destruction of a large neighborhood in Santa Rosa (see above). And without a doubt, for those affected, this is an unmitigated tragedy. The loss of homes, cars, possessions, and even of livelihoods. And a very expensive loss it will continue to be, as federal, state and local jurisdictions and charities spend and spend to provide the social safety net everyone agrees is needed.

California has been on a steep upward growth pattern for a hundred years. As the urban centers burgeon outward, through suburban sprawl, and infill, land that once was either used for agriculture, or was simply ubiquitous "open space" is covered over by housing and paving. As this continues, the intersection between development and "wild" land--the "edge"--becomes a crucial line, where conflict between nature--in the form of undomesticated animals and natural events--and human habitation comes into focus.

In such areas--often referred to nowadays as "Mediterranean" climates or regions--where areas of foliage dry up in the Summer, the risk of fire is much greater. Farmers and ranchers have known for centuries what this risk represents. Leaving large areas of "tinder" poses risks to anyone living or working within such a region. In some parts of the world, such areas burn "naturally"--or "controlled burns" are conducted. Deliberately ignoring the fire risk posed by such vulnerable regions, through complacent urban/suburban planning, or insufficient disaster response, leads inevitably to crises of the kind we have seen. It's just a given, a simple matter of time.

The population of Santa Rosa has literally exploded over the last several decades. It's one of the fastest growing areas in the country. It isn't a "city" in the urban sense, with high density housing within a confined area. It's a huge, sprawling suburban mass, pushing out into the countryside. Both "tract" development, into the immediate surrounding jurisdictions, and more remote "custom" housing out into the outback, have been allowed to proceed, without regard either to environmental consequences, or to the risks involved in living cheek-by-jowl to dry wooded and grassy landscape.

Those who choose to live in such places, must accept the risk that comes with exposing their lives and property to calamities they can't foresee, and which society can't (and shouldn't be expected to) control. California's growth has been posited on cheap open space, a thriving economy, and presumptions about resources that are not unlimited. This growth paradigm has gotten completely out of hand. Its manifestations are everywhere, and hardly need to be reiterated here. Suffice it to say that the "answer" isn't higher density urban centers, or easier pathways to new construction.

These disasters are but another reminder that California has grown too big, and can no longer support these mindless expansions. Humans were never intended to live in the desert. They were never intended to live underwater, or on snowy mountain tops. Despite the engineering "miracles" we've accomplished to bring food and water and space to millions, we can't keep drawing against nature's equity forever. Why allow people to build and live in homes that are next to huge fire traps? If people choose to do so, against advice, then they need to accept the probable risk. Ultimately, we need to stop breeding like insects, and husband what resources and space still exist on the planet.

Does this sound hard-hearted? Not if you compare it to the ruthless alternative. Mother Nature takes no prisoners.

Posted by Curtis Faville at 10:31 AM No comments: