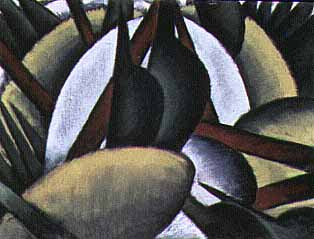 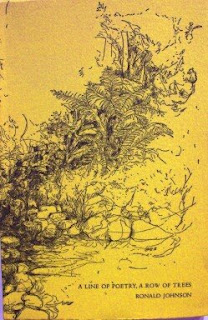 Ronald Johnson has long been considered by The Compass Rose as being one of a handful of poets writing in English since the Second World War, whose work deserves to be included in anyone's list of gifted and innovative writers.  His earliest work, collected in A Line of Poetry, A Row of Trees [Jonathan Williams, Highlands, North Carolina, 1964], was a refreshing departure from the majority of academic versifying on the one hand, and the self-conscious rhetorical gestures of the "avant garde" on the other, which characterized the competing camps of poetry-writing during the 1940's and 1950's.  Working directly from quotations, and relying on a specificity of source, place and time, Johnson's work was a wholly original approach to pastoral, one informed by a deep and reverent reading, and by a circumspect response to his ambient mental landscapes (Kansas, the English countryside, as well as to the graphic prophetic visions of Blake, Palmer, Dove, etc.).  It was modern, and brisk, and confident, but measured and unpretentious.

Our favorite Johnson poem is Three Paintings By Arthur Dove.  Here is the beginning of Part 1:
I. Plant Forms
Dove once pulled up a cyclamen
& tore it up
to show how the color went
down in the stem
& on into the root.
Color is a condition of the plant--
color of the flower
& pod,
embedded in the bud.
Notice how deftly he handles the repetitions of "pulled up" and "tore it up" which is then balanced against the "down" and "& on" which fall neatly from the pulling quality of the first two lines.  Those first two brief stanzas are filled with a controlled fury:  Deliberate, active, even violent, but held in perfect balance.  Moving beyond color, the poem expands outward--
At the perimeters of growth
the plant
has lines of force--

has weight.'
With only 16 words, Johnson manages to summon up a symphonic landscape; you can feel (see) the currents of wind as they move in response to natural forces at work.
If we could look at an orange flower long enough
it would become blue.
What a miraculous transformation!  Color may be a condition of the structure of a given organism, but perception is a kind of magic, before which we stand in awe, as before nature itself.  Our experience can be transformed in time, and may indeed deceive us.
spathe, sheath,
petiole, blade,
stalk, and root--

'these moving circles in which we walk'.

We are caught up in universal motions, intersecting orbits of bodies and flows implied earlier in the flux of weighted wind.  Typically, with Johnson, the two active quotations in the poem imply a (quasi-scientific) antecedent observation, as if the voice of the speaker were verifying historical memory.  Science and alchemy come together.  Wonder is the super-awareness of kinetic interaction, mind sensing the distribution of matter and force as weighted measures, which the poem is set to evoke.  Even more typical, in Johnson, is the specific reference to event, as if all experience constituted a proof of the Imagination.  Feelings, sensations, intuitions are clues to universal form(s).  Science and imagination, inqury and play, are equal partners in the apprehension of life's meaning.  Words (names) echo (meanings) back through time to origins (coinages) out of sound (whorls), (felt) shape, and notation (writing).
*****
Posted by Curtis Faville at 12:54 PM

I congratulate you on your ascent, or perhaps expansion, to the full editorial plural. As TR once remarked: Be eight people & the difficulties vanish

But, zap! May a suitably weighted wind urge your skiff through these pensive waters.

what a splendid post! profoundly true to the subject in all senses, carefully articulated.

i first encountered johnson's writing squatting on the floor of a greenwich village paperback bookshop when i was in my twenties, just browsing the shelves--it was years before i registered any critical notice of him but his publications became heroic to me from the start and encouraged and shaped me, id say, my whole life. now you're saying why. thank you, and i look forward eagerly to the next installment.

It's much nicer to see you on your own here, without the editorial handicap of RS who always trimmed your wings to fit his Procrustean ideals. Lovely posts.

This old bird flapping about the barnyard, squawking and sputtering.

The Book of the Green Man

seems to me I know Tinker

didn't you used to take a lot of pictures? of poets and others..

now to "cruise" the Silliman blog see who is up to no good!

this Olde Bird tiptoes through the barn yard especially where the chickens shit!

The Book of the Green Man's a classic. It's one of the few books I find things in, to come back to--it doesn't get old.

I'll address a future post to an appreciation of it.

Ironic that an American should have written (have had to write) it. Those Brits need to pay more attention to their own traditions!