Kit Robinson in the News 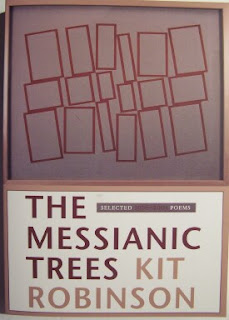 Kit Robinson's new Selected Poems has hit the bookstalls.  It's a beautiful book, a paperback original from Adventures in Poetry.

I was in at the beginning of this news, so to speak, having obtained a copy of Kit's first book, Chinatown of Cheyenne, soon after it was published in 1974 by Whalecloth, and The Dolch Stanzas (1976) published by Barry Watten's This Press (a copy of which Kit sent to me at the time).

Over the years, Kit has published collections with some regularity, every two years or so, while holding down a full-time position as a public relations specialist in the computer industry.

Kit has always written with confidence and a sense of the synthetic technocracy of language; he's totally at home with the dry ironies and bizarre formalities of the post-Modern world.

This book offers me the opportunity to celebrate and deconstruct one of my favorite poems of his, from his book Ice Cubes [Roof Books, New York, 1987].

It's actually a part of a short sequence entitled "Thought"--a poem in five sections, of which this is the second.  For me, it functions discretely and is completely self-sufficient as a descriptive, analytical movement; though the title, Thought, subtitled "contains/non-contiguous/blocks" suggests something of the slant of the intention.  The poems in this sequence are all set one word to the line.  This linear monotony is certainly not an original form, having been used freely by dozens of writers over the years.  But in Robinson's hands, it lengthens out the time of the unfolding of the drama of each poem, and gives the sense of a kind of weird dislocation for sensory data, a mechanical quality.

off
edge
of
ledge

it
bounces
and
rolls

in
a
wide
arc

scudding
against
the
concrete

Superficially, this is nothing more than the most simplistic description of an event, not in the least mysterious or unfamiliar.  Sitting out in the open, on a breezy Spring or Fall day--the poem's casual, opportunistic, accidental, relaxed, attentive positioning puts the narrative voice at a vicarious remove, contemplative, patient and exacting.  It's a meditative poem, albeit in a minimalist mode, sans commentary, sans any interjected editorial additives.  If the poem works, it must function at the level of implication, or irony.  It will signify through the kinetic ricochets of its changes.

I like to think of such poems as this in terms of the game of pool.  Angles and forces, relative weights of collisions at defined speeds, intermediate transfers of energy, reflection.  Crisp enactments set into motion with confident propulsion.

We're watching an empty, or near empty, white paper (or styrofoam?) cup, blown off a surface (ledge), light as a feather (or a kite), nearly valueless (since it's now become trash, having been used?).  An industrial object, one more in a countless, innumerable knock-off (the template of uniformity).

I read two kinds of contrary motion in this poem:  Delight...and frustration.  Delight, in the clarity and deliberateness of its unrestrained eventness.  And frustration, in the sense of the viewer's (speaker's) impotence (inability) to effect an alteration of reality.  Observation is a passive act, limited by the ground-rules of the game.  Description, in this instance, implies a kind of inevitability, an inevitability reinforced by our assent:  Through shared assent:  We've all seen this kind of thing, experienced a similar kind of dramatic banality.

One of the experiments you always find in kids' science and hobby books is pulling a string taut between two paper cups.  By speaking into the open cup "phone" the person at the other end can hear the "transmission" of sound through the string conduit.  A paper cup has a characteristic audible tone, when tapped or tumbled. The "scudding" of the cup against the concrete is a literal sound, familiar and distinct.

Conceptually, the poem is framed by a progression, starting with "wind" and ending with "concrete." For me, it's sort of like an updated "red wheelbarrow" poem, a benchmark re-statement of principle, depending totally on naked fact.

The predominant sentiment is one of distraction; an event precipitated by chance, as defined by Duchamp, commands our attention as an unique accident of fate, whose meaning is assigned by the absence of intention, but which is privileged by our recognition of it, our annotation of a disparate occurrence with the focus of artistic regard.

The cup is a toy of destiny, blown about by a capricious wind, neither providential nor pathetic. The cup doesn't care what happens to it; and neither do we.  There is no deeper eventuality to which we can assign it than oblivion; it is destined for the trash bin.  This seeming superfluity, obsolescence, triviality, is a dominant thread running all through modern life.  Mountains of detritus, expended of meaning and use, piled up or tossed aside in the relentless inertia of industrial mass production: Existence demeaned, devalued, discarded.

The human poignance of isolate disregard is ironized in the static spastic motion of the paper cup as it rolls, skids, tumbles towards its pointless end, its wide slipping arc precisely equal to the circumference of its two circular planes, plus the scudding distance of its abrasion.

There would be a calcular equation precisely defining the degree of resistance and distance travelled by the cup in its passage across the pavement.  Variance as the surface friction, expressed as a value.

I'm not sure what inspired me to meditate on this poem as a mathematical formula, unless it's the precision and inexorability of its technique.  I must admit to a weakness for highly reductive poems.  Not the tiresome fascination some people experience with word games, or crossword puzzles, or rubix cubes; though I might metaphorize the poem as a kind of formula built out of words.  Syntax itself is a kind of formulation of relationships, defined and expressed as meanings assigned to different kinds of signifiers.  The poem refers to phenomena the way our constructed mental narrative of the poem's event mimics reality.  It's exacting, and poignant, and real.  It echoes in eternity.
Posted by Curtis Faville at 5:44 PM

I liked the tight clarity of the poem.

Who is the publisher, Adventures in Poetry? Is that the same publisher that published your book in the early 1970s?

Would you say that this poem has something to do with the minimalism of early 70s sculpture along the lines of -- who was the guy that gave the Cuban gal's art such a push? I'm trying to remember the name of her husband. Carl Andre!

I kept thinking of the editor of Unmuzzled Ox, Michael Andre.

Can't do the accents except mentally.

This reads to me like a sculptural appraisal of the cup's topography, almost.

Have you tried Sudoku?

Larry Fagin, as far as I know.

You say it's hit the bookstalls. I doubt if it's in more than ten bookstores in the whole nation.

How did you get this copy?

It's very hard for smallpress books to get into bookstores.

all the chains have a top-down ordering system, and many publishers have to pay for space, particularly space up front near the cash registers.

That's probably the only way to guarantee a best seller.

What do you suppose is the press run for this book?

I doubt if more than a thousand copies were made. So even if every bookstore in America wanted one, they wouldn't be able to get one.

Even if it was ballyhooed in the NYT and the Wall St. Journal, I doubt if bookstores would buy it.

It's poetry, which almost no one reads.

I would guess that fewer than 500 people will ever read this book.

I bet Robinson's own immediate family will not read the book.

My guess is that the book probably isn't available in more than two dozen bookstores nationwide. That's a commentary on the state of poetry as a commodity, but not the quality of the work being published (or written).

I'm not aware that publishers can "buy" or "command" privileged space in a bookstore. That goes on in grocery stores, but I'm not aware of it in bookstores.

There are very few independent new bookstores left. Those that survive probably don't do it with small press material.

We've had this discussion on Silliman's blog in the past. I don't see it as a big problem. Silliman often rails against it.

500 readers? Could be. Does the number of readers matter? How many people "read" Reverdy?

No one in my immediate family was ever interested in my poetry. That would include my wife, my parents, in-laws, everyone.

When I worked for decades in San Francisco, no one I knew in that world knew or cared anything about what I did away from work. Poetry? It hardly registered on their meters.

Sometimes you do feel like you're in a sparsely populated desert.

I got my copy at Moe's Books in Berkeley, but I could have gotten one from Small Press Distribution, too.

and maybe also the poem describes itself; i.e., the poem Its words_ are each or are collectively_ a papaer cup bouncing rolling in a wide arc. The poet is the wind, the words (or each word) a paper cup), the edge of the ledge being the putting of the words to paper, the concrete the paper and/or the mind of the reader.

By Kit Robinson, I think I have it!

This poem doesn't red wheelbarrow for me as the latter had the prefatory explicit philosophical if abstract assertion; this this poem has none. There are plenty of WCW poems that are similar to this one though, I'd agree.

P.S. Dug too your Ronald Johnson posts of a few weeks back.

I was reading this afternoon doing research on the poet Philippe Soupault for whom a number of videos have recently surfaced. In one of them he talks about how he thought of committing suicide over a young woman. He doesn't name her, and it's hard to sort out the various women. Her name seems to have been Marie-Louise LeBorgne, who had been a dance student in Soupault's wife Mic Verneuil's dance class.

About seven years later in about 1931, Soupault's relationship with this young woman appears to have broken up, and he took up with someone named Helene Gordon, apparently a refugee from Soviet Russia. Gordon was 19, and had a baby. When she was 21 (there is a point to all this history!), Gordon left Soupault to take up with a guy named Lazareff, which in the histories is presented as someone with whom everyone should be familiar.

I looked him up. He was a newspaper magnate of several newspapers with an enormous circulation (two million and more). And he helped Helene Gordon start a journal called Elle, of which she was the top editor for decades.

She said to Soupault as to the reasons she left him, "Au fond, tu n'est qu'un poete." (At bottom, you're only a poet.)

On the other hand, Lazareff helped her found Elle.

I suppose it's a question of values.

And most opt for Elle.

One thing I find interesting though is that even in grocery stores one can find crossword puzzle books, and that's fairly close to poetry, I think, especially when the clues are clever.

The biggest section of the newspaper is about sports.

There are probably almost no newspapers any longer that carry poetry.