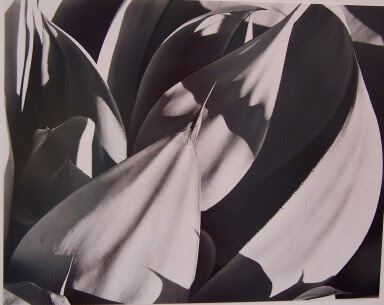 Gertrude Stein famously declared that composition is what every human being is doing all the time, just by being alive, in the present, perceiving, absorbing data, placing our apprehensions and movement (flow) within a context of the world we know and understand. We do not merely reproduce the world, we, all of us, constantly perform creative augmentations and arrangements of objects and feelings and senses, all the time. Composition, in this sense, isn't what only trained and gifted and inspired artists and writers do, but what everyone is capable of, what goes on continuously even on an unconscious level. The human mind is never still; it continuously shapes and orders and prioritizes data.

The above photograph of a cactus plant was taken in the University of California Botanical Garden in 1988. It was late in the day, with the shadows becoming horizontal. As I looked down on it, I could see this composition of sweeping lines, punctuated by sharp dagger-like spines, and knew at once I wanted to capture it. The composition--a natural form at a specific moment in time (the earth's axis at a declining angle to the sun) was not an aesthetic arrangement, but pre-existed my discovery. The camera was an instrument for fixing the arrangement of forms in light. The design of the form(s), and the relationship between the invisible shapes (if there were no light) and the areas of contrasting illumination and shadow created by the light (source) was one of opportunity--my ability (sensitivity) to perceive the visible light spectrum, and the impulse to record it. It was a combination of deterministic factors, as well as of chance: What brought me there, with my equipment; and the possibility of my discovering this composition as I toured the linked pathways of the garden. An intersection of intention and accident.
The best aesthetic impulses are those in which the outcome cannot be pre-ordained. Who would want to write a poem, or paint a picture, or watch a baseball game, in which the outcome were known beforehand? This is the value of process in art, which mimics the process of perception (or consciousness) itself, but is not a reproduction, as Stein says, but another form of composition. It may be that this concept of composition devalues the artistic consciousness as we habitually think of if. Was Picasso's brain somehow unique or unusual? Was his skill in making recognizable forms a facility merely of elaboration? Or is there another aptitude--which for want of another term we may call imagination, that guides the creative hand?
Posted by Curtis Faville at 11:44 AM

the Ron Johnson nod towards
and now this

one gets if they can
beyond fear anger and greed that is
dropping habits...

picks up on "attitude" rather than drift&drivel

attitude has at least 9 definitions..

you are a breath of fresh aire