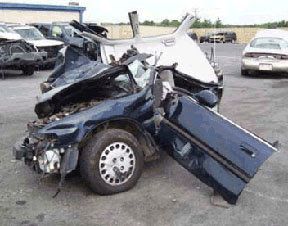 When I started driving in the 1960's, the speed limit on freeways was between 65 and 75 mph. People got into bad accidents, but it was frequently because they were simply going too fast--often as fast as 90 mph, or more.
Automobiles manufactured before 1970 were constructed primarily with all-steel frames, and had in addition steel bumpers, and long engine hoods up front. Seat belts were occasionally installed, but few people used them. They were heavy, and their engines cranked out more horse-power. Brakes were less sophisticated than were later, and they were more difficult to steer into sharp turns because of their softer suspension.
People in those days, as I recall, were not nearly as aggressive on freeways as they seem to be these days. Automobile manufacturers emphasized comfort and luxury, not speed, as the selling points. Teenagers and "car nuts" liked fast cars, especially noisy ones, but they didn't as a rule abuse the laws of the road.
Two trends occurred during the 1970's and 1980's, and it may be that they were mutually reinforcing. Detroit--and Japanese and German--car manufacturers, began to trim down the size and weight of vehicles, gradually replacing the metal with plastic; reducing engine size, while increasing efficiency. These cars were smaller, faster, and permitted greater control and response on the road.
While this was taking place, the behavior of the driving public began to change too. There has been a complete change in the culture of driving. The speed limit was briefly brought down to 55 mph during the period 1974-1987, but then was raised again back to 65 mph. States now maintain their own speed limit laws. Despite efforts to control speed on our freeways, there is widespread disregard for posted speed limits. Drivers routinely exceed the posted limit by as much 20 mph on average--and highway patrol enforcement, when not being capriciously applied, generally tolerates violations.
In addition, the behavior of automobile drivers has changed dramatically since I entered the traffic stream in 1965. Today, drivers routinely "tailgate," or follow too closely the vehicle in front of them. The classic tolerance motto goes: Always allow at least one car length between you and the car ahead of you, for each 10 mph increment of speed. Thus, a car following another in the fast lane at 70 mph should be no closer than 7 car lengths behind the car ahead. If you figure the standard automobile length is something like 12-15 feet, that would mean that at 70 mph you wouldn't want to be any closer than about 85 feet from the car in front of you.
Why?
Because stopping times for standard automobiles, even in the best of circumstances, go up geometrically for each increment of speed. The "stopping distance" calculated by auto engineers is estimated to be in the neighborhood of 300 feet for a vehicle traveling at 70 mph. That means that, even maintaining the "recommended" distance at higher speeds is not likely to enable you to avoid hitting the car in front of you if that vehicle suddenly, without warning, brakes--because your estimated stopping distance is almost four times greater than the minimum recommended driving distance based on the old-fashioned formula.
Despite this glaring contradiction, commuters and other drivers in the fast lanes of our freeways routinely maintain no more than two car lengths of distance between their vehicle and the one ahead of them, even at speeds exceeding 70 mph!
Is it any wonder that commuter traffic routinely piles up in multiple vehicle incidents, as several vehicles in a row--all traveling faster than the speed limit, and all following each other too closely--create a chain reaction in which 3, 4 or 5, or more cars smash into each other from behind.
Despite this habitual "dirty driving" behavior--evident on any freeway at any time of the day or night--the highway patrol does NOTHING to stop it. It may be that "obligatory" citations are harder to prosecute. It may be that attempting to enforce laws in the fast lane is inherently dangerous. Or it may be, as I suspect, that most highway patrol officers would prefer to "wolf the lambs" in the right or center lanes for "speeding" or other relatively minor infractions, because they're easier to enforce, and generate easy revenue.
With our state and local governments all running deficits, there has already begun to be a new push by patrol departments to increase citation issuance, as a way of defraying declining revenue from taxes and Federal grants. Patrol cars have become very visible since the first of this year--it's a ticket bonanza, and if you're not careful, you'll get nicked for a trivial "no harm" violation that, a year ago, wouldn't have mattered an iota.
But our highway patrol needs to start enforcing the laws that really matter. Tailgating in the fast lane is a recipe for disaster. It's probably 20 times more likely to result in serious accidents, long delays, and severe injuries than all the other kinds of illegal driving sins combined.
This isn't the kind of thing you can say to an individual officer on the street; they've usually got a chip on their shoulder a mile high, and are as likely to haul you in for resisting arrest for casually complaining, as if you had pulled a deadly weapon on them. But this is their job. We need to tell our representatives that real enforcement needs to be directed towards greater safety and efficiency, instead of pumping up "revenue" citation totals.
Posted by Curtis Faville at 5:03 PM

got my first car a "hand-me-down 1955 Buick Special with all the chrome around the top edges of the windows
got it
in 1958 when in 11 th grade BEFORE that 495 Beltway was built!

it was a bedroom on wheels! and a real "tank" a dinky 51 Ford
ran into the front at about 40 mph he was drunk and crossed the line hit us head-on his car "totaled", The Special minor damage to front bumper..

Anita made me take the plastic seat covers (that my dad had installed) off of the back seat...


wish is: that I still had that car and Anita!

It's funny that I also wrote about cars today and then came over here (first stop), and here you have written about cars!

I live in a small village in the Catskill Mountains. There are five police forces housed here: county sheriff, village police, university police, state police, and even something called the NYC watershed police. So you can't speed around here. Even ten miles over on a 55 and you are likely to get nailed. I am friends with a lot of police officers and they do have quotas to make, if they want to get promoted. It turns out they are worth their weight in arrests: if they make 80,000 dollars a year, that's about how many fines they have to levy in a year. Speeding is always easy to find, apparently, but the really good fine is drunk driving. That's a handsome price, plus the state levies an extra 100 dollar fee on any fine, which they use for their various pork programs.

I don't know about tailgating. It drives me crazy. I like to apply the brakes to get the buggers off of me, because they drive me out of my mind. With four kids, I have to feel responsible for their safety, and people who are right on your bumper are recklessly endangering children's lives.

I thought the tailgating thing was a suggestion, rather than a law. Is it an actual law? I didn't know this. What are the typical penalties? I've never heard of anyone who's been arrested for tailgating.

"tail-gating"
could lead to
pregnancy or aids

and "we"
don't want "that"
up around Bear Mountain

around here they just increased the number os speed cameras... from 30
to 60! they won't tell us how much they cost or who runs them or how big/small the income..

and, won't tell us who is "policing" them!


it's ALL driving (get the pun?)
me
further into my own (slant on) poetry and art...
and Eye-so-lation.

a tractor-trailer at 65 + mph 4 feet behind me... shit, that's "living" solution? I slow down to 35 as, I have better insurance than she
and, besides,

I discovered a few years ago that if I set the cruise control at 60 mph, I could increase my average gas mileage by up to 2 mpg, from (say) 20 mpg to 21 or 22. This was with a 17-mile-each-way freeway commute and town noodling on the weekend.

With gasoline (then) at $3 a gallon (and rising) this seemed to me to be a useful trade, and cruising in the #2 or #3 lane at 60 didn't seem to take noticeably longer to get where I was going.

Driving like this automatically increases your following distance, almost to the recommended 1 car length per 10 mph! But you have to be willing to sit there and watch everyone else pass you, on both sides; it's kind of like sitting on a rock in a river and watching things float by on the current.

on the highway he kept up with flow'speed of traffic in the right lane..


Mercedes makes the car.... Mitsubishi the engine..
base price new about $15 grand

three cute girls altready asked him for a

gawd if I were 43 years younger!