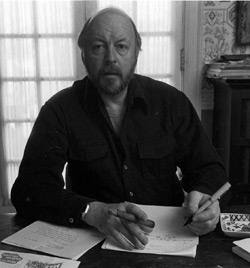 This is the second of two posts on male Gay love poetry, considering separate poems by two well-known poets of the post-War period--this, devoted to a poem, "Lexington Nocturne", by the North Carolina poet and publisher/entrepreneur Jonathan Williams [1929-2008]. This poem appeared in Williams's collection Elite/Elate: Selected Poems 1971-75, accompanied by a Portfolio of Photographs by Guy Mendes (Jargon Press: Highlands, North Carolina, 1979). It might be well to point out that this book was, as were several by the Author, self-published; he cared enough about how his work was presented to see to the matter himself. He felt a legitimate enough regard for his own efforts not to need the implied approbation and approval of having it produced by a third party.

Apparently the Greeks didn't practice sodomy as it's described here. It's obviously a lethal practice.

They did something called intercrural sex, where the older man laid on top of the boy, who crossed his legs. The fold between the thighs was used as a kind of substitute. Far healthier. The Greeks needed to keep their soldiers alive, and sodomy kills them.

I learned this from Robert Peters, who is a gay poetry critic and poet who lives in California, I think.

The point of my post wasn't venereal diseases, but love poetry.

My guess is that heterosexual love poetry is in a funk, unable to be inspired, oppressed by the historical deluge of examples.

I read a fairly impressive poem by Galway Kinnell about having sex beside a waterfall (I think), but when was the last time you read an inspired het sex poem?

I wouldn't know about the orgasm part on the part of the recipient, but I would say that if you love someone you shouldn't do that to them, since it's likely to make them quite ill, eventually.

Better to watch a nice sit-com together, while popping cheese curls.

There should be more poems about cheese curls, and cheese curl moments.

I think the point isn't that sex carries certain risks. All sex does. The vagina is like a petri dish, which is why women are taught scrupulous hygiene.

Before the certain advances in modern medicine, child-bearing was a very dangerous thing. Women routinely died in child-birth; this happened to my stepfather's father's mother, when she bore him. Old grandad was raised by his mother's sister's family, whose name he adopted. Born a Wheaton, he was named Harry Faville. My stepfather should have been named Harry Wheaton, instead of Harry Wheaton Faville. My truer name--at least legally truer than my real father's name (Calef)--should have been Curtis Neill Wheaton.

Many women in pre-science days feared having children, feared for their lives. As well they might have.

But who would attempt that? Not me.

But again, the post was about poetry, not about sex.

The post was about poetry, but the poetry was about sex.

But there were specifics:

"semen up your ass" for instance, is fairly specific.

Georgie (are there really people that are now christened with only one name), says my stance is Christian, and therefore to be rejected (ad hominem), but I think rather in terms of what's functional, which is part of the reason I am a Lutheran.

Nothing much else does.

when I think about the penis in the anus, it seems to me that the parts don't fit together. They were not made with one another in mind.

It's a little like putting bullets that belong in one gun into another kind of gun.

You're likely to get a big bang out of this, but it won't be good either for the shooter or the gun.

They will both be damaged.

But yes, please do discuss Sappho, and also, the different translations, as you set out once to do with regard to Zukofsky's Catullus.

Please also discuss the killing of the four (or was it six?) police officers in Oakland. It seems like that's your beat.

I don't know very much about who's writing love poetry in American english right now. I think love poetry in the het community seems too bourgeois for our Marxist cupcakes who mostly rule academia now.

Poetry is supposed to be a political interrogation of words, if you're language-oriented.

The whole idea is to investigate and destroy all forms of bourgeois life, rather than to celebrate them.

So the homo-sexual love poem can exist, especially if it is perceived as an attack on het love poems.

But you're supposed to be ashamed if you actually love a person of the opposite sex. If anything keep it in the closet, as you're reinforcing the bourgeois order if you do that.

It still appears in ice skating routines. Marriage and its ups and downs is the real theme of most couples skating. There were some good pieces about this in the last Olympics (the Chinese skater who fell and smashed her knee was particularly touching). The British couple -- a few years back -- 94 in Sarajevo?), whose names I can't recall.

I guess you could call that poetry on ice.

But the poetry world has been infiltrated by the political mentality that het love esp. inside of marriage must be destroyed. You're much more likely to find a book of hate poems, or just sex poems (Bukowski was popular).

Love is too bourgeois for all our socialist poets (even Bukowski was a socialist).

And if you did publish a love poem about your partner, you'd be putting her or him in harm's way, because the socialist hornets would rip it to shreds.

So if you want that kind of thing, go back to watching ice skating, esp. couples. You get the whole deal: classical music, lovely leanings upon one another, and the most terrifying of events: a woman thrown spinning into the air, from hence she is supposed to land on one toe and twirl.

I like "mono" better than Gay. It seems more scientific and specific somehow. People still say "Gay and Lesbian sex" but I think that's awkward. Like monotheism--one on one, instead of one to another.

Let's not get sidetracked.

Will our new age of promiscuity and tolerance produce a wave of monosexual love poetry? Maybe it has already....

Let's not argue about Gay sex.

Let's talk about the decline of straight love poetry. Why is that happening? Is romantic love an outworn idea? Were the Greeks "romantic"?

Another thing Georgie raises -- Shelley already violently against bourgeois marriage (mostly he was a rat, as were many of the other Romantics, both in England and in France).

but there is also the case of Coventry Patmore and his Angel of the House. It's almost used as a whipping post today by feminist critics.

But then in ice skating you still see Marriage as a heavenly ideal, which is how it was meant -- as a gift from God -- a rainbow stretching from our time back to the garden of Eden.

Check out this little bit of couples skating:

Think about the ardent technique and ask yourself if ANY contemporary poet has worked that hard to get that kind of technique.

Also, imagine what it's saying about love, and just imagine how it would be attacked in the blog-arena, even within a relatively safe socialist arena like Silliman's blog (compared to the Buffalo list, where it's the Wild West for anyone who approaches with anything like a Western Ideal, -- it's Yosemite Sam -- beauty outlawed, and mocked, like Sharon Tate's body before the claws and hammers of the Manson Family.

If you have a love, today, you'd better hide the fact. The Manson Family will get your address. Today, it's almost the whole academic and artistic worlds who will shred anything beautiful just the way Tex and his gals went after Sharon Tate.

I would posit that it's not that het love itself that has died, it's just a love that dare not speak its name in the inverted realm of academia.

Even Silliman himself has to keep his family more or less hidden from the Mansonites who visit his blog. And children? Imagine bringing them up at the Poetics List, or in any arena where they could be slaughtered by the Mansonites...

They are never ever mentioned by the communist hordes, because they know that the people they are running with are closer to wolves.