The Metaphysical Implications of the de Kooning/Kiesler Portrait [1960] 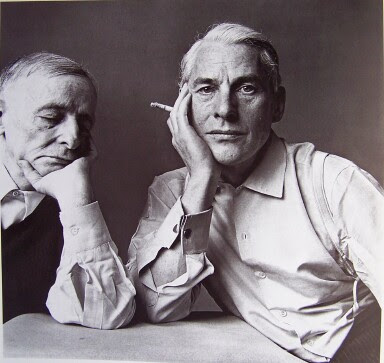 This one was fun to read. I only have one quibble. When you write, "Scientists believe..." or anything along those lines about the universe, you are making a hypothesis into a settled consensus, which I think is not so, since there are many competing theories. The idea that everything is made of light, too, is just a conjecture. As for the origins of life, too, all that is merely conjecture, and nothing along those lines has been proven or settled, at least to my amateurish knowledge.

I like to see PATTERNS in photographs, like winding staircases, cobblestone streets, or finding analogous comparisons between trains speeding one way, and other cylinders another way.

I think the pattern here is that the two men are so much alike in their shirts, and in the shape of their faces, that they are almost like twins, except one is much older. Presumably the older one would have been awake had he been younger? And so it shows a kind of shuffling off the mortal coil, from light into darkness, back toward a greater light, depending on belief.