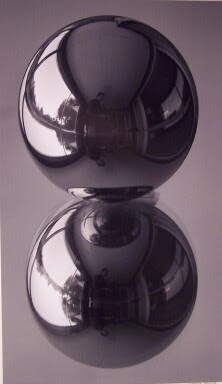 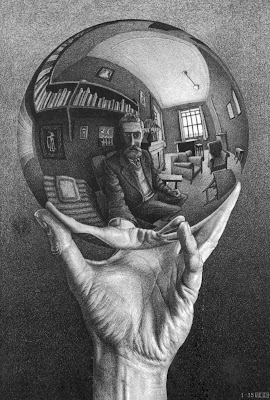 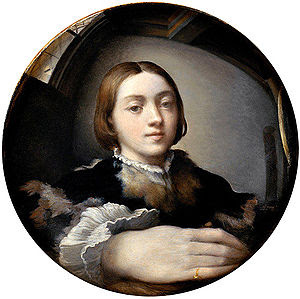 The attempt to self-describe has intrigued artists and writers for centuries. Is it possible to preserve objectivity and speak in an unbiased way--without vanity or caution--of oneself? Autobiography is an exercise in the proposition that one can see one's self clearly enough to report accurately, and meaningfully, to justify the effort.
The graphic arts permit us to create visual representations of ourselves which may be accurate to a considerable degree. There can be little dispute that a photograph is a "true" version of its subject, though with the new technologies of photo-image manipulation, even that conceit seems suspect. Painters have the luxury of changing any aspect of their subject(s)--painting a self-portrait is the ideal "mirror" of reality, in which the lineaments of character and age are reflected in the will and vagary of the personal. Painting carries the added dimension of creating a literal illusion, in which the apparent "reflection"--as in a mirrored self-portrait--denies reality in the interests of a fake narrative, allowing the image to appear as if the subject was not "painting" (creating) the image being represented, but was posing in the reflection of the moment. This defines the difference between the mechanical "exposure" of the image through photographic process, and the physical building-up of image through the application of light-sensitive matter (paint, lead, etc.) to a surface.
The first image above was taken by me with a 4x5 camera on a tripod mounted inside the sun room of our old house in late 1980's. It was created using a large polished steel bearing (about 2 1/2 inches in diameter), balanced on a mirror. The reflection thus not only reflects the image of the room in which the spherical bearing resides, but also the mirrored image of everything reflected off the surface of the bearing onto the flat mirror surface below, creating a twin reflected composite. My head and upper body can be clearly seen. Since the camera is focused at a point above the bottom edge of the mirrored plane, there is no "lower" half visible, only that part of the space above the reflecting surface of the mirror.
The Escher Hand With Reflecting Sphere is a totally constructed image: The artist has created a "picture" of the artist holding a "crystal ball" in his left hand. The image is a lie, inasmuch as we know that the picture is not a real reflection, but a drawing of one. This places us (as well as the artist) at a further remove from the possible reality of the image, since the maker of the image is not present (either as a camera, or as the painter/artist himself drawing the picture we see). But of course we know it's impossible, because it's obviously a drawing, and not a photograph at all. Escher seems--as almost always--to be dazzling us with his ingenuity and cleverness, rather than asking any deep questions about process and truth.
The third image is of the painting Self-Portrait in a Convex Mirror by the 16th Century Italian painter Girolamo Francesco Maria Mazzola [1503-1540], commonly known as Parmigianino ("the little one from Parma"). Painted when the artist was only 21, it shows him facing a convex mirror, with its spherical distortion, his left hand resting just below the edge of the reflecting surface. The portrait appears quite accurate, though we have no way, at this distance in time, of verifying its verisimilitude to its subject. But the point of the painting almost certainly does not depend upon the photographic accuracy of its portrayal; after all, photography had not been invented in the 16th Century, and people had no way, aside from plaster masks, shadow tracings, and paintings, of preserving their images in time. Parmigianino seems to want to penetrate through time, to pass through the membrane of that dimension into the viewer's world, to show you his real face, looking calmly, and with curiosity, back at you, cheating death and the fixed coordinates of possibility. He isn't here, with us; he's still in his world, but in some peculiar sense we are looking across the gulf of time. The skin of the painting's surface--a metaphor for the polished glass surface of the mirror itself--is all, it seems to be saying, that separates us from each other.
John Ashbery's long poem, "Self-Portrait in a Convex Mirror", its title an exact mirror of its subject, is a disquisition, of sorts, on the meaning of this painting. Read it to see what he has to say about time, art, and mortality. It's certainly his best work.
Posted by Curtis Faville at 7:31 PM

Nothing Ashbery ever writes every means anything to me. It's a lot of mumbling, if you ask me.

Escher is at least clever, and that's fun. Do you like to solve Sudoku puzzles? I think those are supposed to be good for keeping your mind flexible. I do a couple of them every day. It's fun to hunt down the patterns.

Escher is a little like doing one of those puzzles, except that the Sudoku puzzles are a little more active.

They were apparently developed by the Japanese because their language isn't suited to crosswords. It's a nice development: one more thing the Japanese have contributed to contemporary culture along with kamikaze bombers and Sumo wrestlers.

If a Sumo wrestler would grease up his stomach just a bit more, then when Ashbery looked at his reflection in it, he would have an Escher moment.

I think eventually John Ashbery will be to postmodernism what Tennyson was to the Victorian Era.

Salaams Curtis. I stopped by to see what you were up to and saw Escher's work for the second time in my life. The first was yesterday when my son showed me his sketch of it. Isn't that an odd coinkydink. Really. Just thought I'd say salaams and I enjoyed your article.

Welcome, Meg, and many happy returns.