This piece is a belated "review" of a book which appeared in 2007, but which I didn't become aware of until a month ago. Everyone by now knows about Frida Kahlo, the Mexican painter and unconventional woman artist [1907-1954], and the subject of an ambitious recent bio-pic which starred Salma Hayeck and Alfred Molina [2002]. 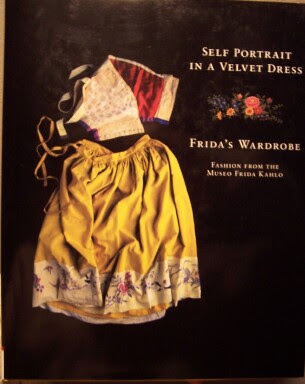 Kahlo wasn't "just" a painter. She designed interiors, and was also a brilliant wardrobe designer, which this book documents in some detail. Regardless of what you think of her art--which was in some ways deliberately anti-traditional while at the same time being anti-Modern (or quintessentially Modern -- take your pick)--you can hardly look at the dresses and blouses and wraps and shoes she created for her own use, without acknowledging her genius in this area. Artists are traditionally not noted for being active in fashion, except peripherally. Photographers often get deeply into fashion. Painters often do stage design, or furniture design, or (as Diego Rivera) mural painting. 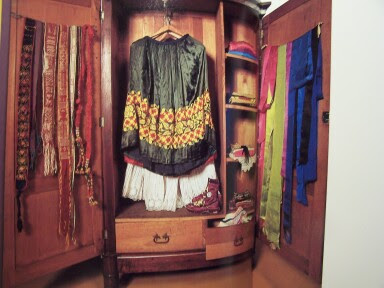 But fashion seems somehow a pragmatic application of the purely artistic imagination, in a way that seems to exempt it from "serious" artistic endeavor. Is flamboyance and daring and unbridled expressionism antithetical to fashion design? In recent times, one would have to say not. Eiko's stunning fantasies, for example, seem more suitable for beings from another planet. 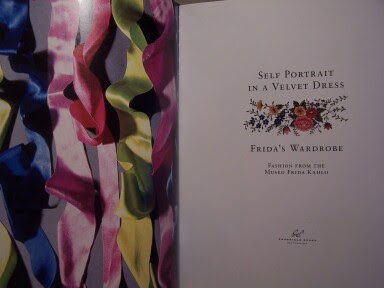 Until now, unless I'm more uninformed that I realize, scant attention has been paid to Frida's clothing designs. Brief mention has been made in biographical work-ups, but it may have been the inspired, colorful elan of the movie, which finally resulted in this impressive study and documentation. 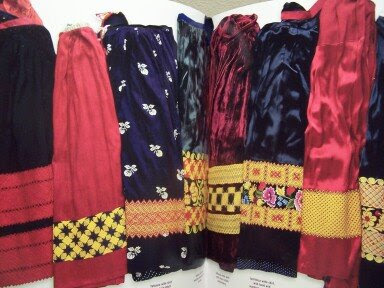 What sets Frida's work apart from so much other "avant-garde" fashion design is its elaborate, labor-intensive decorative texture. It vibrates with intense, bright colors and glowingly rich highlight(s). This is not a fashion which could--or ever would--be mass-produced for capital exploitation. It's a fashion of meticulous attention to detail, married to intense visual contrasts and simple directness of statement. It's also an impressive adaptation of frankly nativist elements, Mexican or South American in character or origin. In addition, it isn't a fashion style based on mannequin bodies--Frida was small, but she wasn't anorexic, and she gloried in the vivid earthiness of her natural beauty--her dark hair, broad eyebrows, etc. 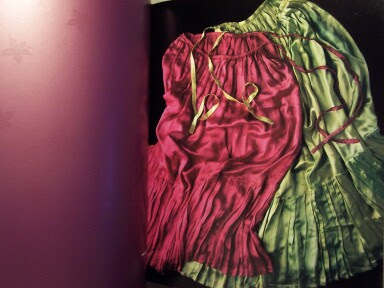 Despite her belief in the perfection of society (she was an ardent Communist sympathizer), she was not in the least bit reluctant to employ the richest fabrics and most labor-intensive techniques for achieving her desired effects.
The photographs in this book are almost overwhelming in their richness, delicacy, daring, polish, panache, forthrightness. Frida enjoyed being a woman, gloried in her femininity, and used her artistic genius to create a whole extra dimension of her identity out of her attire. This, in addition to creating a body of pure art that rivals the best productions of any woman artist in history. She was able to weave a vision of her own being into her painting--as self-portraits--which functions on both levels:  As decorative design of a high order, and as a profound explication of her complex emotional life, it's an impressive achievement.
Hats off.
Posted by Curtis Faville at 7:41 PM