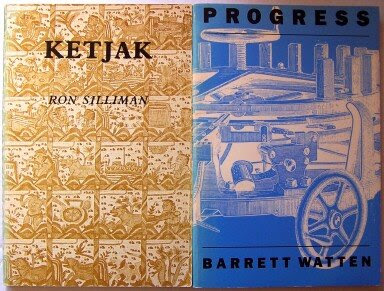 Of the two works, it might be easier to talk about Ketjak first, since it is clearly more accessible (in the sense of being apprehensible to the general reader) than is Progress.

Ketjak is a nested work, initiated with a seed phrase, expanding by increments of increasingly large size, from a single line--
Revolving door.
--with the last section being 1482 lines. It is written all in prose, with no concession to any idea of traditional "verse" or stanzaic setting. Nevertheless it has a certain musical quality, the sound of variable sentences and phrases, all of equal "value" along a line of address. There is no "argument" built of progressive statements in the prosaic sense, but simply an accretion of detail and assertion of various kinds, none of which is specifically connected or rationally linked to any other part. The basic element is the sentence, though many of the sentences are fragments (or phrases). Repetitions occur and reoccur (frequently altered), these in turn being incorporated into the ongoing flow. This is related to Stein's technique, but the level of statement and the content of the statements is more various, more specific, more interesting and more unusual than anything you find in Stein. Stein's statements and content are clearly generic in quality, whereas Silliman's are topical, quirky and multi-contextual. But both kinds of writing exclude time (narration) as a principle of development: This simultaneity creates a level playing field: There are no hierarchies of value superimposed upon the mass of arrowed propositions:
No hurry, no hassle. Only a thorough historical-materialist analysis, piercing the ideological fog maintained by the dominant coalition of interests and destroying the fetishes continually produced and reproduced by those concerned with the preservation of the status quo, only such historical-materialist analysis can hope to disentangle the snarl of tendencies and counter-tendencies, forces,influences, convictions and opinions, drives and resistances which account for the pattern of economic and social development. Heat ripples the air rising from the street, reshaping houses on the hill's other peak.
This is taken at random from the last section (block) of text. Since the statements don't occur in a predictable, or narrational sequence, we have no choice but to treat them either as random, or as disjunct statements. This apparent contradiction causes degrees of contrast and improbability.
In Moore's eccentric structures, scientific data and acute observation of minute particulars are dropped in (fitted) with considerable finesse; nevertheless, to the degree that such accommodation is a convenience (a realization of potential), it is no more revolutionary than an ode by Ben Jonson. But with this difference: Moore never lets the persuasive rhetoric of her prose become tangled up in, or mangled by the demands of the form; it is never primarily "musical" in effect, because it never forfeits its motive to expedience.
With Ketjak, all such notions as expedience and fitness are irrelevant.
We can perhaps understand how this common approach to form works by suggesting a function: Letting the empty "form" (or structure) of the poem stand for one dimension, with the words themselves comprising another dimension, and the content which the words embody, and to which they (the words) refer, comprising a third dimension. In Moore, the form's demands discipline (or limit) the syntactical options available. In Silliman's poem--based on groupings of sentences and phrases which do not build rhetorical structures--the arbitrariness of the form is matched by the apparent arbitrariness of the sequence of assertions, leaving meaning as residue. The sequence is self-reflective and self-referential on several levels, offering a number of possible metaphors for its own interpretation: A rock thrown into a pool, creating expanding circles which bounce back from shore, intersect, becoming increasingly complex. "The acoustics of emotion."
It may be a form of semiotic analysis, whose validity does not depend solely on the multi-permutations of application but on the interrelated observance of the field of proprositional formats.
--and so forth. How many kinds of statement are there here? How many different occasions are evoked by the varying levels of statement?
If Moore's poems are mannered evocations of the world seen through the taxonomy of naming and describing--each with its own generic code and internal clock, then Silliman's poem is an arbitration, or mediation, of the competing mental spheres of consciousness, each competing for attention, each equally valid, momentarily diverting--the rational and irrational spinning in a vortex of tagged signifiers.
Posted by Curtis Faville at 3:51 PM