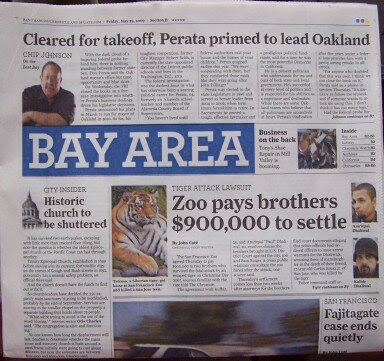 Today's San Francisco Chronicle carries a lead article reporting the latest development in the "Zoo Tiger Mauling" story. Back on February 4th, I posted a previous blog entry on the case, taking the SF Zoo management to task, as well condemning the irresponsible behavior of the young jerks who posed as "victims." This is part of what I wrote:
"The youths acted irresponsibly, with malice, mischievously inciting naturally aggressive predators to go on the offensive. They were bingeing on drugs and alcohol, abusing themselves, making a public nuisance at a public attraction, and ultimately playing chicken with wild animals in an artificial situation. Finally, to top it all off, they have the audacity to blame the zoo and the city for their own immoral and grossly irresponsible behavior. Rather than blaming the zoo, the city, and the tiger, it is rather these men who should themselves be prosecuted as the vandals and low-lifers they are, for having caused the whole thing. The three youths, it later was reported, had criminal records. Not long after the incident, the two Dhaliwal brothers hired a lawyer, and have filed suit against the City of San Francisco and the Zoo for negligence and huge damages."
Now the SF Zoo has agreed to pay $900,000 to the two Dhaliwal Brothers. The settlement came less than two weeks after attorneys filed court documents alleging that police officials had ordered officers to issue arrest warrants for the Dhaliwals, accusing them of manslaughter in the death of their friend, 17-year-old Carlos Sousa Jr. of San Jose, who was killed by the tiger.
Given the quickness of the settlement, and its relatively low amount, it seems obvious that the Dhaliwals' lawyers advised them to broker a quick deal out of court, rather than face a jury on charges of manslaughter and malicious conduct. Predictably, these same lawyers claimed that the arrest warrants had been a tactic to deflect attention from the city's negligence and intimidate the brothers, and that the settlement had been made because it had decided "the investigation could not substantiate" the charges, as the Dhaliwals prepared to pursue further claims against the city proper.
What poppycock!
These two hoodlums brought about the death of their friend through irresponsible, malicious behavior. Rather than own up to their actions, they immediately sensed an opportunity, refused to speak with police, hired high-profile defense lawyers, and went after the loot.
It would be hard to see why these sulking jerks could believe they were entitled to any compensation, when it was their friend Carlos Sousa Jr. who had suffered the real injury.
Earlier, it was reported that the Sousa family settled out of court for an undisclosed amount. You could make a reasonable case in that instance for compensation, since Sousa appears to have been the victim, though his participation in instigating the tiger attack has never been explored or reported.
As a reward for bad behavior, the Dhaliwals are given $450 Grand apiece. Who knows how much the lawyers got?
The Zoo shouldn't have backed down, and the City shouldn't either. These men should be tried and convicted of manslaughter, and sent away for a minimum of 15 years apiece. In a reasonably run system of justice, that's what should happen. But it won't.
Now these two conniving hoods can snigger in private about how they ripped off the public and got away with murder, and got the tiger killed into the bargain. Men like this don't have consciences.
It's disgusting.
Posted by Curtis Faville at 7:39 AM

cheapest way for the zoo and bank-rupt California to go,,,

and it will boost paying visitors who will visit the scene and buy a tiger tee shirt!

the animal ain;t the ones in the cages.

they get 2.3 million dollars worth of front page advertisement and
will bring to the tiger exhibit million buying tiger chotchkas

besides CA is bankrupt

as is amerika..in all ways..

/if the Nationals were an American League team

my neighbor took his three kids to an Oriole game

the fewer people who buy tickets (or anything else) the higher the price goes to make up for the lost revenue...

hey yeah they just announced on CNN that the VOLT starts at $40,000


and, CNN always tells the truth.

think I'll wait for one of them
little Chinese or North Korean cars selling for $9,000 with a Sony radio...

I can buy it at COSCO or K-mart

Throw them to the lions.

the Oriole souvenir banner and two little bats cost the $25

and fifteen cents for the 3 bags to carry them in!

I hate to be a pest about this

Elizabeth said that Phil spent $225 for the 4

you just can not willy nilly throw radical leftists to the lions not even in jest...

Caligula used to do that!

Can't put a mustache on the Mona Lisa, because her painting isn't in this room.

Curt... I'll try
however
difficulty following
rules are detrimental to
my

such as it is.