Flyfishing & Me (One of my Three F's) 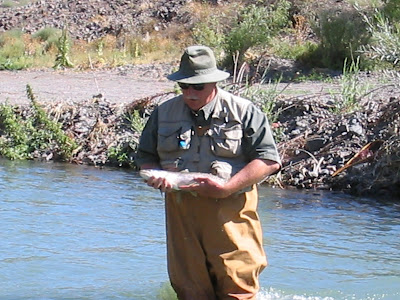 Here's a picture of me proudly holding an impressive Brown Trout I've just caught on a fly on the Owyhee River in Eastern Oregon last year. My friend Keith took the picture, and within seconds of this snap, I'm returning this noble beast to the water whence he came. I forget which fly I took him on, but it was undoubtedly smaller than a size 16 hook, which meant that the leader was probably a 5x tippet, and the effort to land him was a dialectic with jeopardy. But what redblooded flyfisherman would have it otherwise?

I didn't come by my interest in flyfishing in quite the usual way. My stepfather, Harry Faville, had grown up in Wisconsin. After his first marriage ended in shambles in the early 1930's, he wandered about disconsolately, working at various jobs, never staying long in one place. He bought an old black jalopy and drove West over dirt roads through Minnesota, South Dakota, Wyoming, Idaho, Montana, Washington, Oregon, stopping sporadically along the way to fish and acquaint himself with the local flora. Years later, when I was a young boy, he would tell stories of his exploits on the Yellowstone River, the Madison, the Missouri. In these years before the Second World War, fishing in the Rocky Mountains was a real adventure. Roads were poor, settlements were sparse, the country was untamed. Camping and nature-going hadn't become the national pastime it is today. There were no limits on fishing, and streams were loaded with wild trout, and the fishing pressure was almost nil. Hiking off road for an hour would put you on water that hardly ever saw a fisherman. 20" fish were common, and 30" fish not unheard of. Flyfishing as a sport, as a science, was still relatively in its infancy. Methodical streamside entomology, and ecological knowledge about fish habits and conservation were decades away.

Unfortunately, Harry had kind of given up serious fishing by the time I was a young boy, circa early 1960's. He talked about old split-bamboo flyrods, and casting, and tying flies. But we hardly did any fishing. Except for a couple of trips to back-country lakes, I had almost no experience of fishing. After I went away to college, I forgot about these memories, and Harry died in 1973 in an automobile accident near Dillon, Montana.

In 1976 I began reading some of the literature of flyfishing. I soon discovered the work of Roderick Haig-Brown, the dean of fishing writers. Also Robert Traver, who was also a popular fiction writer (Anatomy of a Murder, etc.), who wrote about Michigan's Upper Peninsula. Haig-Brown, a Brit who'd emigrated to British Columbia in the 1930's, had established himself as a competent back-woodsman and naturalist, and eventually published dozens of books of fiction and non-fiction, most of it devoted to fishing and natural resource issues in his adopted Canada. I credit him particularly with reawakening my sense of interest in fishing.

In 1976, my wife and son and I packed up our gear in a rented Ford Van and drove up to Southwestern Montana, and Yellowstone Park for a month-long exploration of flyfishing country. I took with me a brand-new Gary Howells bamboo fly-rod, and other assorted paraphernalia. We drove up into the headwaters of the Big Hole River, and camped beside a pretty lake. There were Cutthroat Trout, Brookies and even a few Grayling, a trout-related species which only survives, outside of Alaska, in the lower 48 in a few high-country alpine waters. I'd camped before, as a boy, but had never seriously fished. I knew almost nothing about technique, but gamely went about wading and casting in the pristine landscape of Montana and Wyoming. With a few lucky casts, and beginners' luck, I managed to land a few beautiful small to medium sized Rainbows. Brook Trout were easier, but they fought just as hard. One day on the Madison above the Varney Bridge, I hooked too powerful Brown Trout in succession, each of whom fought me to a draw, breaking off in swift rapids after 75 seconds of blood-curdling action.

In the years that followed, we went back again and again, and I tried other places. Hat Creek, Fall River, Hot Creek, Silver Creek in Idaho, The San Juan in Northern New Mexico, the Madison. I was definitely hooked.

A few years ago, I met a fellow locally who shared my love of the sport. Keith now lives in Sun Valley, near the Big Wood River, and not far from Silver Creek, the stream made famous first by Ernest Hemingway (in the days when he lived nearby), and later his son Jack. The Nature Conservancy purchased most of the best water at Silver for preservation and public access. 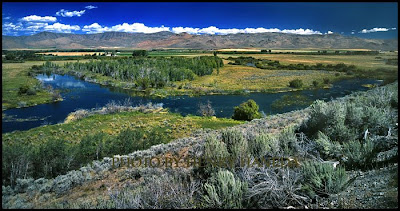 This is a picture of Silver Creek on a sunny day--I think from up near the old fisherman's cabin overlooking the upper portion of the Nature Preserve. The landscape looks a little barren; there are wheatfields in this wide, flat valley, and sagebrush, and other kinds of dry-country vegetation. The ecology is "alert"--and the fish are wary. Beautiful Rainbows, requiring size 18, or 20 or 22 (hooks as small as an pencil eraser), deftly tied to resemble minute aquatic insects, and "leader" (filament tippet) as fine as a human hair. Perfect casts, with no drag (the "drift" of the line as the current pulls it back and forth between you and the fly (lure). It's tough!
I know of no feeling quite as exhilarating as a fish striking a floating fly. Animals which hunt develop a kind of unpredictability. If you've ever watched a cat hunt...you never know--and I'm not sure the animal itself really knows--when the moment of the "strike" will come--it's impossible to predict. Suddenly you're at one end of a pulling contest. The fish is in its element, but you're not. As you might expect, fish usually go "nuts" when they're hooked. They dash about wildly, or turn tail and race in the opposite direction. Sometimes (Rainbows) they jump right out of the water to throw the hook.
Flyfishing, at its best, is a dialogue between fineness of deception, and strength of materials. In order to fool a larger fish--who's survived by having avoided being caught and killed through several seasons--you have to present a reasonable imitation of what it's eating (an insect hatching at that particular hour of the day), and you have to make it seem as if this lure is behaving in a way the "natural" insect does on the surface of the water. This requires finesse, and very delicate material. However, once hooked, a larger fish is not only several times heavier (and able to "throw his weight around") but smarter. So here you are hooked on to a big bruiser, but in order to fool him, you had to use the merest wisp of nylon synthetic, and now you're trying (praying is a better word) to avoid pulling too hard on him lest he break the line and escape.
Flyfishing has evolved into a pure sport. That is, most true flyfishermen understand that in order to preserve the resource for all, it's necessary not to kill the fish you hunt. This means that most flyfishing involves so-called catch-and-release, the deliberate returning of the caught (landed) fish to the water, employing a resuscitating technique in which the fish is held under the surface, long enough to revive itself (after its life-or-death struggle), and swim away, to live and eat and breed and maybe be caught again on another day by another fisherman.
Now that my co-editing job on the Eigner Project is substantially complete, I may be able to escape to Idaho for a little time on the water. I can't wait!
Posted by Curtis Faville at 4:45 PM

there actually are Purple Mountains Majesty in Idaho!

Jamie Brownlow caught the fish I dressed and cooked 'em
over a fire..

he is part Indian from North Dakota

we camped out all over, even in downtown Cody ...

a couple things
your posts are really amasing
clear insightful topical probing and yet with a sense of invitation
a genuine willingness to share knowledge in a friendly way...like good food shared

being on the river is as important as thecatching of fish if not moreso...getting naked and swimming if the fish arn't biting is within the scope of fishing possibilities

have you read any david james duncan??

I think that comradeship is important. It's not really much fun just fishing by yourself, though some great fishing writers have been loners.

It often seems that the best fish I hook or catch go unwitnessed. That's what makes those fish tales hard to believe!

Eating fish is good, but if the sport is to survive, we can't keep killing them. There are too many people to do that.

used to go down to Patomac River in Georgetown...
catch fish

used to go to Chesepeake Bay

cook 'em sometimes over or in a fire

mutating the fish and other seafood

I don't eat "fish" anymore... you gotta fry it to death (and beef too) to kill all the poisons...

you know they got Atklantic Salmon now grown in swimming pools ("farm raised") in India!

lobsters with rubber-bands around their mouths.. only thing the eat is their own wate!

even TOFU im-pesticided to death..

I appreciate the gist of your commentary...