Giorgio Morandi - "Nothing is More Abstract Than Reality." 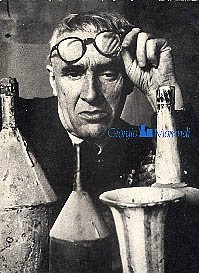 Giorgio Morandi was an Italian painter and etcher [1890-1964] whose reputation among the art community has steadily gained momentum over the last fifty years. Though he lived through the Fascist period in Italy, he escaped untainted, holding an art teaching post for 26 years, and continuing to practice his exacting style throughout the latter half of his life. The quotation above is by him.

The Photographer Frederick Sommer said something almost the same:  "Reality is greater than our dreams." These two dicta could stand as philosophical principles for a whole school of thought in the Modern Age. They strike me as a reaction to the meta-science of psychology, in that, despite the importance we may place upon the "super-natural" quality of fantasy (dreams), or the power of the human imagination to create and recreate, universal phenomena is ultimately of greater interest and complexity than anything we could offer as an alternative. 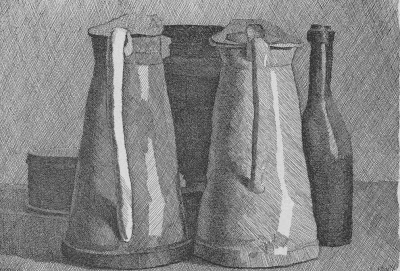 Sommer and Morandi are two artists who sought to explicate, using very modest means, how this is true. (I will deal with Sommer's work in future posts.) You can see it in the work reproduced above, from 1912. Morandi was heavily influenced by Cezanne, in particular the feeling of object-status imparted through the construction of volume and depth through contrasting textures; it's very much as if the "subject" (or "object") being represented is of subsidiary importance to the effects being sought. Morandi will paint or etch the same retinue of objects over and over, in constantly changing arrangements or views, in subdued, "quiet" light, creating dozens of versions with an almost religious precision, dedication and patience. The reduction of subject-matter has been called "minimalist" by some critics, in an attempt to explain the power of his vision.
Also, nearly all Morandi's works seem suffused with an obscure light, almost as if he had sat in the darkness for long periods, letting his eyes adjust to the dimness, then studying the effect this mutedness or subtraction could have on objects of varying reflectivity or density. The choice of available objects mirrors the decision to employ only available light: Harry Callahan once said that a photographer could make great photographs by photographing anything between two and twenty feet distant, no matter where he was. The implication of which is that the "search" or the "quest" for adequate subject matter is paradoxically futile: Reality, or possibility, is as close as your writing desk, or your paint tray--or, as in Morandi's case, as near as the wine bottles and crockery of his own studio-kitchen.
Morandi's studio in Bologna had a monkish air. It's been restored and photographed by archivists. He lived with the utmost simplicity, dedicating himself to refining and perfecting his art. In the post-War art scene of popular American art, such concentration and reductivism probably seems a little flinty. The spirit of Abstract Expressionism, of Pop, the "messy" extravagances and indulgence of so much Modern and post-Modern art, seems antithetical to Morandi's solitary labor, his understated metaphysical investigations. For me, it echoes certain East Asian art, Zen imagery--the almost hypnotic quality of simple objects which acquire the resonance or oscillations of trance or nirvana.
The pleasure one gets from looking at Morandi's work is a kind of intellectual sensuality:  The studied exactitude of line, the warmth and deftness of textures, the caressing delight of shapes evoked through delicate modeling, the muted atmosphere of intense focus on simple forms. I've looked at Morandi's etchings for the last 40 years, and they never get old. Each time I return with renewed fascination in their comfortable density, their mastery of means.
The only other artist whose work carries the same kind of seriousness, perhaps even gravity, is de Chirico. A few of Morandi's canvases are clearly influenced by the canonical Italian surrealist, as here: 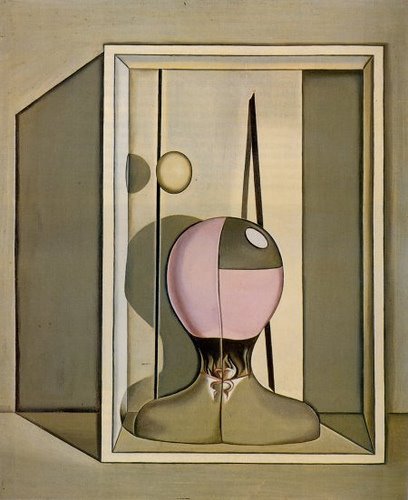 La pinacoteca impossibile ['The Impossible Gallery" still life, 1918]
To me, this is as good as anything in de Chirico, though it bears the same narrow, slightly claustrophobic, intensity, of all of Morandi's work.
Posted by Curtis Faville at 12:12 PM