When I first discovered James Salter, no one I knew had ever heard of him. A Sport and a Pastime was an improbable novel, a sort of quasi-French New Wave erotic fantasy narrative, clearly the work of a sophisticated writer, but where had he come from, and what else had he done?
I found the book, if I recall correctly, in a drugstore, on one of those revolving pocketbook display racks. Obviously, the publisher (Bantam Books) had decided to market it as a pornographic book, as the cover was unashamedly suggestive.
The prose was immaculate, impressionistic, deftly seductive. It struck me as reminiscent of European (say, French) cinema. Quiet, moody pans across landscape, surfaces, textures, feelings--very European in that way. And the sex was as seen through the glass of a vicarious American, though very wise and even cynical. The narrative voice obviously gloried in life, like a hedonist, but with a jaded edge. Maybe de Sade through the eyes of Flaubert.
It was the first book that made me really want to see France, not as a tourist, but from the inside out. Indeed, the book seemed a paean to the Gallic spirit. It's like the intricate daydream of an older man, speculating about a fantasy-affair with a French girl. The narrative device places us simultaneously inside an omniscient viewpoint but shifts occasionally to a position of a friend, reporting events second-hand. This minor ambiguity is handled very shrewdly, as if we were being made to feel slightly embarrassed at our own curiosity. Yet it isn't curiosity that drives the story, but fascination. 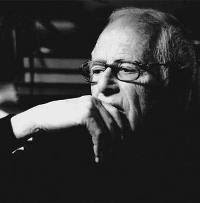 The first time I heard Salter read was in 1988, when his collection of stories, Dusk and Other Stories, was published. Salter has a subtly "down-east" accent, and he's a brilliant reader. Off the cuff, he's hesitant and uncertain, but when he reads, he's really in his element. I was already a fan of Salter's by this time, but I hadn't read the story he read that night, "American Express." It's a masterpiece of cruel ironies, brilliant quick portraits of people, places, awash in a kind of nostalgic regret, a perfect portrait of the selfish lawyer class of Eastern privilege and presumption. You don't have to like Salter's characters to love how he evokes them--the elegant procession of human frailties he puts before you. 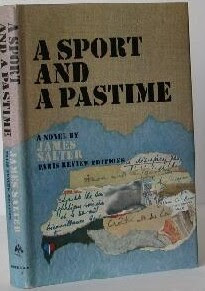 Salter's earlier life is documented in part by his own memoir, Burning the Days [1997]. He fulfilled his Father's wish that he go to West Point. Eventually becoming a pilot in the Air Force, he stayed in for 12 years, serving in Korea as a fighter pilot. He had already been trying to write a novel about his service experience, and The Hunters [1957] was a straightforward story about American Air Force pilots during the Korean War. It was made into a movie which starred Robert Mitchum, Robert Wagner and Richard Egan. Though only a modest success, it appears to have led directly to Salter's decision to leave the service and try writing full-time, as well as a decade-long stint as a screenwriter. The years between his second novel, The Arm of Flesh [1961] (another service novel), and the early 1970's, were intermittently devoted to screen-work, notably resulting in the script for Downhill Racer [1969], a Robert Redford vehicle. Salter invariably makes a point of emphasizing the decisiveness of his choice to leave the movie industry; though it clearly permitted him a viable living during years when his literary career was just an underground rumor.
Salter has always been physically active. An amateur mountain climber, and a skier, his sojourns in the Alps led to his inspiration to write Solo Faces [1979], the story of an obsessed American climber. Its description of the life of small Swiss alpine villages, and the hair-raising physical and sensory impressions of being on the rock are the work of a poet. 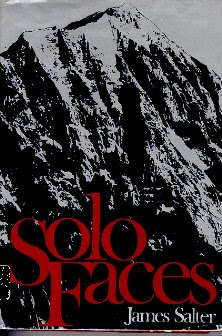 Light Years [1975] is a sad, majestic ode to a failing marriage. Set in upstate New York, along the Hudson, it documents a social milieu which is undoubtedly familiar to the author. Filled with evanescent description, a muted landscape of light and shadow, it's like a symphonic journey through a series of disappointments, as the inexorable downward descent from passion to fatigue to boredom to bitterness progresses to its logical denouement. 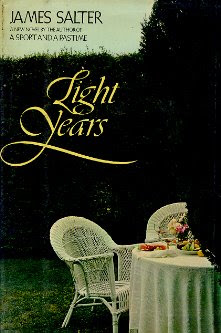 Salter, who is now 84, recently collaborated with his wife Kay Eldrege on a gastonomic daybook, Life is Meals [2006]. As one might deduce from the texture of his fiction, Salter is a bon vivant, a lover of food and fine wines, who relishes the perfect dish at the perfect moment, almost a Proustian indulgence. He divides his time between Vail, Colorado, and Long Island, with frequent trips to Europe. One imagines that his table talk might be as entertaining as his fiction, a suspicion supported by his forays into the non-fictional essay (There and Then: The Travel Writing of James Salter, 2005).
Rumor has it that Salter is closing in on completion of a new novel, which I believe is to be a "comedy." If so, it's likely to be a new departure. Salter is a master of dialogue. I for one can't wait for it to appear.
Maybe someday I'll get on a plane and discover that my seat companion is Salter himself. That's my little fantasy.
Posted by Curtis Faville at 10:36 AM

I saw Salter read from his latest book of short stories, Last Night, a few years ago in Iowa City--a terrific reading, one of the best I've ever heard. He's a wonderful writer.

I thought that Salter taught briefly not long ago at Iowa. When I heard him read from Burning the Days, he mentioned that he'd been teaching at, I think, Williams College.

He said he loved teaching--it may be slightly sad that he never got into that until very late in his life. He certainly was not a "workshop" product--he struggled all alone in his spare moments while in the service.

The good side of that is he is so much more a worldly man, than an academic. He has trouble fielding questions about form and strategy--for him it's a "sullen craft" instead of a ship inside a bottle--

Another writer who has Salter's same kind of hypnotic focus is Jamaica Kincaid. Kind of an amalgam of Dinesen and Beatrix Potter.

I recently came across your blog and have been reading along. I thought I would leave my first comment. I don't know what to say except that I have enjoyed reading. Nice blog. I will keep visiting this blog very often.

Glad you read the Salter piece.

He's one of my great heroes.