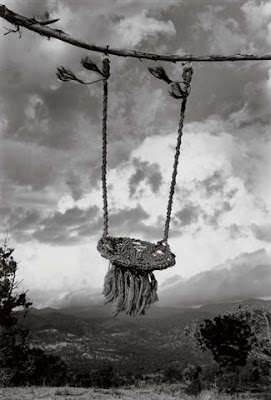 "New Mexico" William Clift
Brett Weston was quoted once as saying (this may not be exact): "When we both listen, something may happen." The implied approach to photography contained in those words is somewhat atypical of Brett (he wasn't very talkative about the spiritual aspects of his craft), though to anyone who appreciates his work (as I do), there is no mistaking the mysterious, even miraculous quality which some photographs can evoke.
Another photographer, from a generation later, whose work shows the power of careful listening (and watching, and thinking, and waiting) is William Clift [1944- ], who works out of Santa Fe, New Mexico. Clift has self-published two books--Certain Places (1987), and A Hudson Landscape: Photographs (1993). Clift is extremely careful about what images he publishes, as well as those he chooses to exhibit. This care may be evidence of a stingy nature, but it is certainly the result of a desire to limit his known output to works that measure up to his vision. 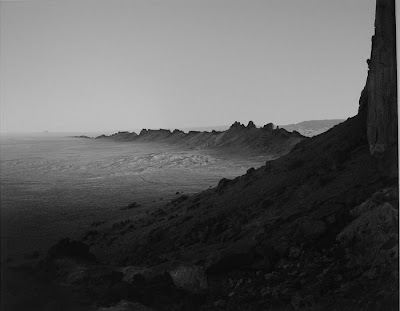 "Desert Form"
Clift's work doesn't contain much fanfare. You won't find extravagantly positioned views in it, each image is thoroughly considered, and meditated beforehand. His work is in the tradition of the quiet, clearly focused views, powerfully imagined, and flawlessly executed, but without the sense of meretricious pandering to "heroic" or "picturesque" overkill so common these days in popular (usually color) landscape work.
I discovered it through that first book (Certain Places)--just a handful of images, but each one saying something specific, separate. The best photographs, no matter what their subject-matter, make us pause, as if we were listening to a whispered password to another dimension. The arrangement of objects, the tilt of the light, the unsuspected vantage--something, difficult to put your finger on, at first, has been captured, which contains a quality not immediately apparent, but which is revealed with continuous or repeated viewing. With Clift's images, that quality is composed of about equal parts awe, peaceful acceptance, fascination, joy, memory, and sadness.
"Fence, Tetilla Peak"
How, you ask, can a photograph of a dry southwestern landscape contain all these kinds of apprehensions? Well, that's part of the magic of photography.
When I visited Clift at his studio in Santa Fe, he showed me just a couple of his prints. But he insisted that I look at them long enough to absorb the detail and decisions that went into the printing process. "This one," he told me, "took me three months to get just the right tone along that canyon rock shelf." Painstaking repetition, incremental adjustments, living with the negative, and its possible versions, day after day, week after week, until the living precipitate, the essence of the conception, came clear. 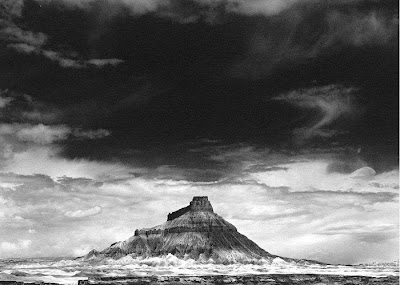 "Factory Butte"
That kind of dedication requires infinite patience, as well as a refusal to settle for shortcuts or "accidental" successes. Life may grant you the rare opportunity--some photographers bet the farm on these, improbably rare though they may be, but Clift comes from the older school of craftsmen, who believe in the difficult truth of concentration, effort, isolation, mythic power.
Posted by Curtis Faville at 12:50 PM

the last album I ever bought vinyl after my heart attack
1982
was THRILLER...

I got the music into my 'program' via MJ

My feeling about photography like this, the best black and white photography is that it defines a meta-space or worlds from a record,
and in this way it is truly and uniquely a modern medium, becuase it destroys the barrier between abstraction and realism.. I mean you can refute that, and its on a kind of wonder or emotional level that I speak from, not hard linguistic distinctions. And I like the way you employ mythic. That first image certainly has the weight of a golden fleece or dionysian honey bladder or whatnot.
It reads cryptically and yet utterly familiar, and seems like
a paragon of photography's unique
presentation of the floating signifier.. It can quixotically shift from pure tonality and geometry to something elemental, and trans-rational, or vaguely symbolic, like the winnowing basket
as a symbol of language itself, that ragged tassel what we do with each other's utterances, the empty
basket like the upturned palm of the F, or open field. Great photographs and thoughtful post, CF.