Ninth Gate [1999] comprehends a number of diverse talents to produce a B movie which has all the makings of a cult classic. Since Roman Polanski removed to Europe to evade prosecution for statutory rape charges, his career has been predictably uneven. After Chinatown [1974], and Tess [1979], his output has been severely curtailed. Still serenely gifted (The Pianist won him a well-deserved Best Director Oscar in 2003), he's capable of conceiving of interesting cinema, on a short budget or a large one.

Ninth Gate is loosely based on Perez-Reverte's novel The Club Dumas [1993]. The original novel was centered on a literary "club" focused on the work of Alexander Dumas. Polanski's version, however, delves into satanism, setting up Depp's persona as an unscrupulous antiquarian book scout who becomes involved with a group of devil-worshippers, along the usual Faustian lines. This narrative has special interest for me; as a rare book trader, I'm often tantalized by the machinations of book acquisition and marketing.
Traditionally, the book trade has been conflicted over the ethics of practice. Polanski exploits the half-serious implications of Depp's capitulation to his mercenary tendencies, in the context of satanic ritual and power. The film on its face is a spoof, but it's played straight-up as a sophisticated horror-cum-mystery film, replete with an evil angel (played by Polanski's real life spouse Emmanuelle Seigner), and a would-be devil's disciple brilliantly played by Frank Langella, a set of satanic twins (played by Jose Lopez Rodero), and a full-fledged would-be witch (played stylishly by Lena Olin). 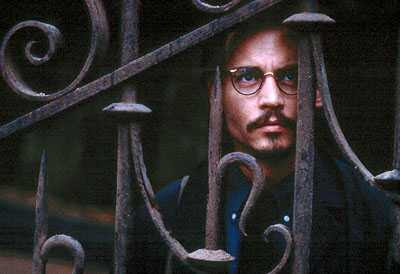 What if the devil had co-authored a limited edition text in pre-Renaissance Italy, which contained a riddle for the summoning of ultimate super-powers--but which required the collation of three separate, unique copies to complete the infernal code? Depp (Dean Corso) is hired by Boris Balkan (Langella) to travel to Europe to steal the two copies of the book which he needs to complete the set. One copy resides with a bitter, old wheelchair case living in Paris, the other with a gentle old decayed Spanish gentleman book collector living in an empty crumbling villa. People keep turning up dead. The protector-angel appears at opportune moments to save Depp/Corso from his own ineptitudes. 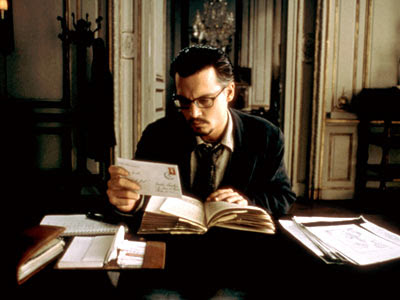 The riddle of the three texts involves the interpretation of a set of engravings, each of which differs slightly--together, they form a magical code to summon the devil's power. Seigner possesses the most hypnotic green eyes in the history of cinema, and Polanski focuses on them to equally hypnotic use in the plot. In the end, almost by accident (or fate?) she seduces him, and we are led to imagine that he will pass through the ninth gate to achieve satanic power.
The movie is similar to the Mickey Rourke vehicle Angel Heart [1987], another Faustian satanic possession flick.
Depp's career has taken some wrong turns since he made Ninth Gate. He's made three Caribbean Pirates movies, and a fourth is in the planning stages--this exploitation stuff really seems beneath him, and you wonder why, given his skills and successes in straight roles, he has to waste time with this stuff, when he could be making movies as good as Jack Nicholson's. Depp has range:  He can do drop dead serious stuff, and he's also capable of comic range (as is Nicholson). But doing campy pirate movies isn't challenging enough. If he were as adventurous as John Malkovich, or Alfred Molina, he might have a career as impressive as the first ranks, like Guinness or Tom Hanks. But for the time being, he seems stuck in a rut. It's often been reported that he reads a lot of scripts and proposals, but has trouble finding decent ones. Certainly, at this point, he doesn't need the money. One of the key skills any successful actor must have, is the ability to intuit what will work for him, and to choose the right parts that both challenge his aptitude and exploit his gifts.
Ninth Gate is one of my top 10 cult classics.
Posted by Curtis Faville at 5:46 PM

Nicholson has plenty of clunker roles, done for the cash presumably.

Same's true of just about all the great actors in recent decades.

So you can't blame Depp too much for the pirate flicks.

I saw Depp on Letterman recently. He said he NEVER watches the movies he does. He's never seen them!

He also talked about (and Letterman shows photos) of this huge boat he's got (156 foot, steam-powered), that he uses among other things to take his family and friends to Little Hall’s Pond Cay, Depp's private island in the Carribean.

Still wondering why he does those movies that seem beneath him?

Depp has already reportedly made over 50 million dollars from the pirate movies to date.

Can you think of any reason anyone--even someone wanting to "own an island"--would need any more lucre?

Save running for President, what possible use could anyone make of such astounding sums?

He might need to buy more of Jack Kerouac's clothing.

Nah. He's already so much bigger than Kerouac--on the celebrity meter scale--he's well beyond that.

I am impressed you like this film Curtis. I watch it every once in awhile, and always like it.

I think one of my earliest movie
memories is of Fearless Vampire Killers, which, as a genre film
is pretty hard to compare with anything, save perhaps Warhol's
two Hammer-inspired homages, but I
like it much more than those.

I am curious. Do you like Elio Petri's film _La decima vittima_.
That is one of my favorite cult films. Another outstanding film is
Joseph Losey's _These are the Damned_ in which Viveca Lindfors
gives one of the best speeches
in B cinema. Watch it!

Both of those films have Crrrazy cool soundtracks as well.

Did you ever see The Draughtsman's Contract [1982]?

Obscure flick with some interesting angles.