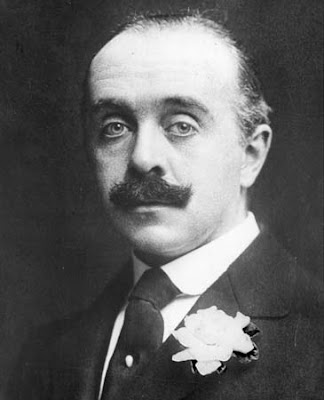 Of all the figures of the fin-de-siecle--the "Gay Ninetees"--the Yellow Decade--last hurrah of the 19th Century's decadence and indulgent refinement(s), Max Beerbohm [1872-1956] is probably the most interesting of all. Wilde's scandalous biography notwithstanding, no one else possessed a comparable talent, perceptivity, clarity of mind, equanimity, rich humor, and sense of purpose that Beerbohm did. As a precocious 19th Century Dandy, he lived on well into the 20th, a tolerant and bemused witness to the revolutionary changes in civilization, and a perfectly preserved example of the spirit and outlook of another age.

I first discovered this fascinating writer and caricaturist through S.N. Behrman's affectionate extended Portrait of Max [Random House, 1960], which appeared first as a New Yorker Profile. I immediately fell in love with his delightful caricatures (cartoons), and his elegant, modest, and refined personality, accurately recorded by Behrman over a series of visits he made to Beerbohm's villa in Rapallo, Italy. (Rapallo, it will be recalled, was the one-time hang-out of Ezra Pound, Basil Bunting, and other literary lights.)
Beerbohm became my introduction to late Victorian and Edwardian English culture: Shaw, Wilde, Yeats, Rothenstein, Bennett, Conrad, Hardy, Swinburne, Beardsley, Kipling, etc., all turn up in familiar garb and attitude as subjects of Beerbohm's razor-sharp artist's pencil. In Beerbohm's cartoons and reminiscences, these figures came alive: Rather than stuffy, respectful subjects, he saw them as fragile, vulnerable human beings with all their flaws and peccadilloes.
The first thing to note about Beerbohm was that he was precocious. As the youngest member of a talented generation of writers and artists, he was destined to survive the longest, the last witness to the guttering gaslight of late Victorian aesthetic pretensions, a superannuated mock-historian and charming wax-museum piece, still chuckling, 50 years on, about the fads and foibles of a simpler time. The only other octogenarian with whom he shares this privileged vantage--to my knowledge--was E.M. Forster [1879-1970].
By the time Behrman began to interview him, Max had long since abandoned England, departing to live in Italy, with his new bride Florence Kahn, in 1910. This removal has always fascinated me--not sure quite why. Max had "conquered" London society, albeit as a fun-poking observer of its excesses; it was almost as if, sensing the falling curtain on a whole phase of cultural history, he made his neat escape "out of history" and into a half-century's exile in an indefinite twilight of nostalgia and superannuated self-preservation.
Max excelled in several media. His reputation in posterity will doubtless always depend upon his cartoons, or caricatures. (I once had an argument with one of my English professors about just what made a caricature a caricature. She insisted that the head of the subject had to be several times larger than the body, but in many of Beerbohm's best caricatures this isn't the case at all--in fact, in many of them, the head is actually smaller in relation to the size of the body than it should be, but there was no arguing with this woman--she couldn't imagine any of her students knowing more about anything than she did, and couldn't admit a fault.) In any case, caricature as a form is primarily a satiric medium, designed and practiced as an amused imitation of a figure, often a well-known one (the better well-known the better, actually), with or without a caption. Cartoons routinely tell a kind of story, have a narrative, or impart a message or present a visual editorial. Caricatures are primarily an explication of character, poking fun at excesses or eccentricities of physical impression, or manner of address. Beerbohm produced hundreds of these studies over his lifetime, in a characteristic style, and they are, nearly all of them, classics of the genre. 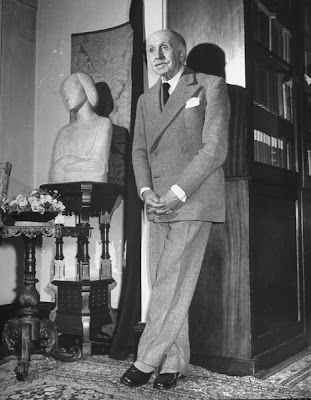 Some of his wickedest caricatures were of Wilde, Kipling, and Prince Edward. Though he was usually gently mocking, Max could be vicious and pitiless, as this exaggerated mask of Oscar Wilde (below) shows-- 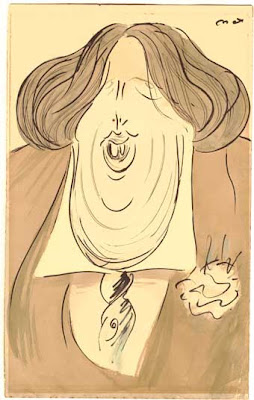 --or, as this portrait of Watts-Dunton and Swinburne shows, even harsh in his implied judgment. 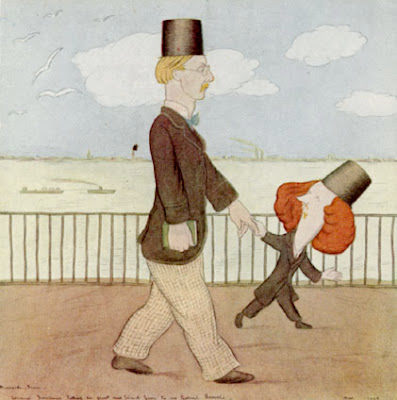 Beerbohm's artistic contemporaries included, of course, Aubrey Beardsley. Beardsley's more violently distorted imaginary portraits belong to the same tradition as some of Beerbohm's most audaciously bizarre ones. Whether these are true caricatures, or some more elaborate form of serious art, I can't say. This one of Beardsley himself, seems to belong on the edge between silliness and total abstraction. Like all of Max's best work, it's stylish and chic without seeming totally dated. Those tiny trees, for instance, like a sort of child-like freize, as a weird backdrop,--what exactly do they signify? 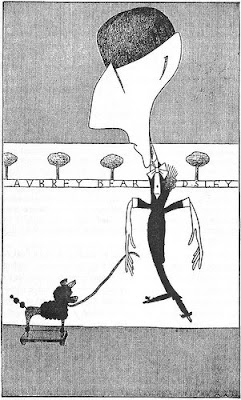 Max's next great gift, a twin to his graphic, was for literary parody. Parody and caricature are allied, since both forms use the assumption of style and method to create an impression through exaggeration and mimicry. Max's collection of parodies, A Christmas Garland [1912]--all developed on the theme of Christmas--contains what are probably the finest examples in that form ever done. Dwight MacDonald, who edited Parodies: An Anthology from Chaucer to Beerbohm and After [1960], flatly states that Beerbohm was the greatest parodist in history. His "versions" of James, Kipling, Conrad, Shaw, Wells, Galsworthy, Chesterton, Frank Harris, etc., are sheer genius, capturing perfectly the tone and manner of each writer's characteristic style, while preserving a sense of fun and games at the same time (not an easy feat at all!). 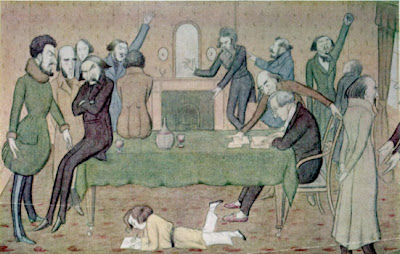 In addition to these ventriloquist's gifts, Max was also a serious essayist and reviewer, having replaced Shaw as the drama critic at the Saturday Review for twelve years. As a casual essayist, Beerbohm's interests were neither philosophical, nor political, nor scientific--as an essayist he was a lightweight, but a charming lightweight, and a masterful stylist. Pick up any example of his prose, and admire the balance and rhythm of his sentences, his paragraphs. Never before, or since, has anyone managed to lavish so much skill of so little subject matter. 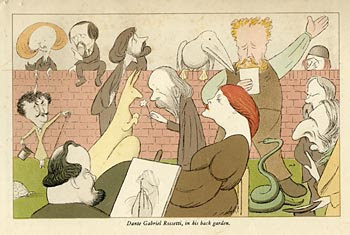 Last but not least, Beerbohm was a novelist. Zuleika Dobson; or an Oxford Love Story [1911], was his only fiction, but it has held a special place of honor as the most perfect example of the spirit of its age. A fantasy on the theme of unrequited love, it involves the mass suicide of a host of Oxford undergraduate suitors to a classic femme fatale. The book has been in continuous print since its initial appearance, and continues to draw admirers after nearly 100 years. It is modern in its limpid ironies, and never takes itself seriously. These are qualities too often lacking in the world today, as indeed they are at any time. 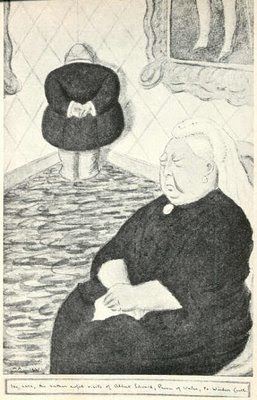 Original Beerbohm drawings regularly come up at auction, though I have never been moved to own one. There were ten editions of his drawings published during his lifetime, and they can be had for a fraction of the cost of originals. If you want to see what the "yellow" nineties were like, or how people thought about things in the Edwardian era, Beerbohm's essays, caricatures and parodies are a good place to start.
Beerbohm himself was quite modest. He determined early on that his gift was a limited one, and he set about exploiting it in the most efficient manner. Every age deserves a Beerbohm, to keep it honest, to puncture egos and pretensions, and to make it laugh at itself. Calvin Trillin has done yeoman's work on George W. Bush--certainly one of the easiest targets of satire ever to rise to high office in our political history--churning out light-hearted doggerel on the theme of corruption in the executive office. But we need more. The best antidote for bad governance is humor--wicked and sharp and vicious!
Posted by Curtis Faville at 11:00 AM

Makes me think of the famous 'Yellow Book'or some such.
Seem to recall the name, but found I didn't know a damn thing about the guy. Thanks for the awesome biopic, Curtis. Well done.

I have a fact-simile edition/copy of SALOME with the Beardsley drawings..

he was a close friend/supporter of Wilde (and others) and< I think that he quit Hingeland over Salome being banned from a showing! and, OH Her Dance...

maybe "Z" was Djuna Barnes? or Mina Loy?
maybe even The Baroness Elsa?