Things are heating up in the National League, as division leaders and wild card hopefuls attempt to improve their chances by acquiring players before the trading deadline.
Here in the Bay Area, our odds were much improved this week with the acquisition of Ryan Garko (from the Cleveland Indians), and Freddy Sanchez (from the Pittsburgh Pirates). The Giants management, not known for its aggressiveness in playing the free agency market or late season trading derby, signaled its desire to place bets on this year, in favor of "building" and "waiting until next year." They gave up two potentially good minor league pitching prospects to get these hard-hitting infielders. These may not be quite blockbuster acquisitions, but they're certainly major.
The Giants have built a first-rate pitching staff around three young arms:  Tim Lincecum, Matt Cain, and Jonathan Sanchez. Of the three, Sanchez is the furthest behind in his development, with flashes of greatness tempered by periods of indecisiveness and wildness. Just two weeks ago he threw an impressive no-hitter against the Padres, which may be a sign of things to come, or just a fluke. Added to these phenoms are Barry Zito--coming off two terrible years, he's shown definite signs in some recent weeks of breaking out of his slump--and Randy Johnson--whose career may be finally over with an arm injury at age 45. Brian Wilson has been solid again as our closer, though he's been a little flakey at times. 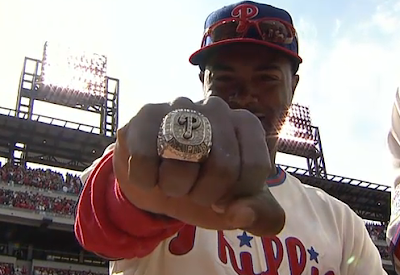 Meanwhile, the Phillies, Series champs last year, come into town on a wave of optimism. Jimmy Rollins, the team catalyst and all-around great player (speed, power and clutch), has finally started hitting after a slow start; and the team's  usual power contingent (Howard, Utley, Ibanez and Werth) is booming again this year. One might have been forgiven for thinking that their performance last year was a long-shot, given their mediocre pitching staff, "anchored" by 46 year old Jamie Moyer (presently with a 5.32 ERA). So it was no surprise that the Phillies just acquired the services of Cliff Lee, last year's Cy Young winner (22-3 with a .500 team, and a 5 to 1 strikeout to walk ratio!) to bolster their staff down the home stretch. Lee has come back down to earth this season, currently with a 7-9 record. Baseball history is rich in star players reaching new heights after being traded to contenders. Philadelphia's acquisition of Lee may guarantee a Pennant, but not necessarily another championship.
Suffice it to say that had the Giants had anything like the power line-up the Phillies now have, they'd have run away with the National League West. The Dodgers, cobbled (as usual) out of high-priced free agents and some scrappy journeymen (after you get past Broxton and Billingsley, their pitching staff looks none too impressive), have played way over their heads all season, and are certain to hit a bad patch soon. When that happens, the Giants--with their important new acquisitions at 2nd and 1st, will likely be vying for the lead spot. The Phillies are leading the league in runs, but as everyone knows, pitching dominates the post-season. Two great pitchers can quickly negate a powerhouse/weak pitching team.
I doubt whether the Giants could hold their own in the post-season this year, but these new additions definitely add spice to the mix. If the Giants are able to take three, or even two games from these bums from the City of Brotherly Love, it'll get interesting. We'll be routin'! 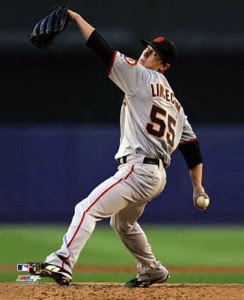 I live about an hour's drive from Cooperstown. Last week' paper featured a signing held there, and on the front page was Juan Marichal, who was a pitcher for the Giants, I think, in about 1967. He's still alive, and looked pretty good for a seventy something. I wish I had known he would be there. I always wonder how he deals with the guilt of having brained that catcher decades back. Iwould have liked to ask him.

The Giants roster has always been exciting. I grew up in Philly, but always liked the Giants better, partially because of Willie Mays. I had read a kids' biography of him, and was a big fan.

Utley is my son's hero now. All his t-shirts say Utley.

But I don't have time to ever watch a full game. The games are so long. I just watch the highlights on the 5-minute sports sections on the regular channels.

It's interesting that now the cable news channels never cover sports. Fox doesn't, and CNN doesn't, and I don't think MSNBC does (I rarely watch MSNBC).

But then there are the 24 hour hour sports stations like ESPN. So I guess that evens out.

Do you go to the games? I used to go in Seattle to see the Mariners but had a string of games in which the fans were screaming racist things from the left field at players barely ten feet away, and I couldn't stand it. I left, and wrote a letter to the paper about it. It was incredibly awful that the players had to deal with such abuse. Is that within the first amendment to scream the n. word?