I could certainly write at least a dozen blogs on Philip Whalen, a poet who was once as important to me as anyone I could name. During my early youth, I tended to idolize individual poets--we'd have a sort of honeymoon during which I would buy all their books, read everything they had written, and gather as much biographical data as could be had (in those primitive times, you couldn't simply "Google" a person's name, you had to dig for bits and pieces of information from stray sources). While I was still an undergraduate at Berkeley, Harcourt, Brace & Company had unexpectedly and improbably published On Bear's Head, in hardcover only, at $16.50 a throw. As Whalen once remarked, the story was that "you were supposed to steal that book," since no one he knew, or any potential fan of his work, would have had the necessary cash to plop down to legally buy a copy at that price. I remember taking something like two months to put the necessary money together to buy that book. (My other major purchase during this period was Larry Eigner's another time in fragments, which was, if memory serves, $6.50 (from Fulcrum in England)).

I had already read Every Day [1965] and Like I Say [1960]. Whalen's work was very accessible--and I understood instantly what he was talking about. He seemed to have no pretensions, except possibly about Zen Buddhism, but even so, the argument and atmosphere of his poems was perfectly clear. He was a white American male who'd been in the Army, was reasonably cheerful, had a perspicacious mind, and sounded almost as abnormally normal as a poet could expect to be.

Beyond my easy identification with his persona, was his clarity of mind, and flat, but witty, American speech patterns. He was a colloquial writer, but with a broad range of reading and interests. His easy-going approach gave me hope that I wouldn't have to write like W.B. Yeats or Robert Lowell in order to be considered a serious writer. 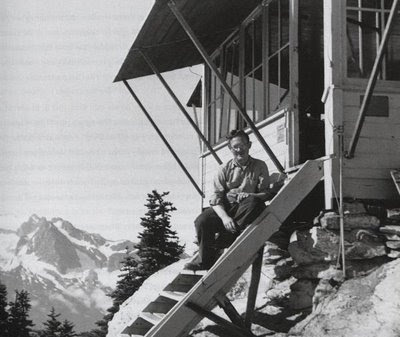 Whalen had worked as a forest look-out. When I was just a teenager, I'd been encouraged to consider doing that very thing. My stepfather had even driven me up to Modoc County one Spring day in 1963 to interview for work with a Summer fire crew job. By that time, the look-out jobs were considered plums, and only those with political connections could get them. As it turned out, the fire crew was being manned by juvenile delinquents anyway, so that never worked out.
The idea of having all that time to oneself, alone, atop vast vistas of wild country was endlessly attractive to me in those days. Go up there in the clouds and write!
Whalen's great friend and contemporary Gary Snyder, whom he had attended Reed College with, also had been a look-out. It all seemed to me then a very (what we would call today) green thing to do. In the context of Whalen's and Snyder's interest in Eastern religion and mystical attitude towards nature, I felt a special kinship with the shape of their lives: West Coast men fascinated with the Far East, intellectually proficient but practical and pragmatic about the tasks and duties of ordinary living. Politically Left, but unpretentious and easy-going as comrades.

By the time I'd caught up with his work, Whalen had decamped to Japan. By the time I myself had begun to write seriously, he had started on his path to Zen monkhood. I was never much interested in religion: My parents had made me go to church for about five years as a boy, while they never went; my stepfather said that it was important for me to "have the experience" of religion, to see what the whole thing was about--but in reality I think it was probably just a way of getting me out of the house for three hours each Sunday so they could have uninterrupted sex. I had had a Catholic roommate in college, and what I saw of his devotion and habit of mind didn't encourage me to explore that angle any further. I've always been an agnostic/atheist, but Whalen's attachment to Zen Buddhism seemed to make a certain amount of sense, in that it furnished a practical habitual approach to health and attention which is a fine antidote to the selfish-go-getter-anxiety of American Puritanism. I never felt the need to "escape" from society, though in the late 60's and 70's the pull of hippy ruralism intrigued me.

In most of the interviews and statements Whalen made in later life, he tried to present himself as the hapless flower to whom things happened, as if he couldn't summon the gumption to get up in the morning. This is of course only partly true, though his passivity is a big component of his Buddhism, accepting and acknowledging, rather than striving and overcoming. 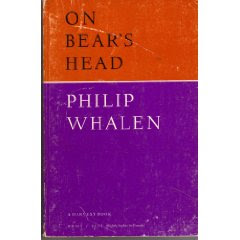 I always found his poetry to be nicely balanced between these two tendencies--the desire to make and build, and the need to wait and watch (submissiveness). He seems to have found in the practice of Zen, a discipline that gave shape and meaning to a rather haphazard approach to living. Another expression of this balance, is his native humor, which counterbalances his keen intellectual curiosity. Like all closet academicians, Whalen tended towards the erudite and complex, but his modesty (one might even call it lack of self-esteem) usually kept him from taking himself too seriously. In the poems, this had the effect of infusing the writing with a kind of nutty energy and unexpected elisions. His work is never laborious, or unrelieved. 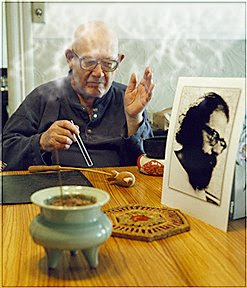 After On Bear's Head came out, Whalen continued to publish more books of poems, in much the same style as he had since the early 1950's.
The other side of his production was the two novels, You Didnt' Even Try [Coyote, 1967], and Imaginary Speeches to a Brazen Head [Black Sparrow, 1972]. These two fictions in many ways provide a deeper insight into Whalen's mind than any of his poetry, since they address actual relationships and situations, without being limited by the more formal manner of his poetry. Basically, they are "bohemian" narratives of young artists living and working and loving in the Bay Area during the 1950's and 1960's. This is subject matter which has been explored by many other writers, such as Herb Gold, Alice Adams, etc., but Whalen's approach is more insideout. In one sense, all of the characters in his novels are different aspects of himself--simply expressed through different "bodies" and "heads." In a sense the "imaginary speeches" are the verbalized versions of what any person thinks or wishes to say as a declamation of identity or belief. Anyone who is so inclined, spends much of his/her life composing such speeches as a form of self-expression or argument. It is the eternal dialogue that humanity carries on with itself and history. 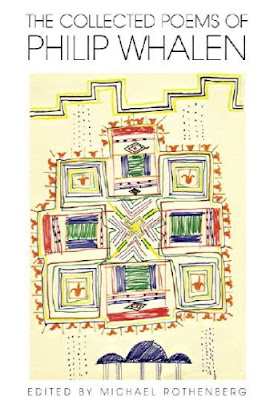 When Whalen's collected poems appeared, it felt like an anti-climax to me. Whalen had always said that On Bear's Head wasn't a collected poems--and, given his compositional style--there was every reason to believe that there were a lot of unpublished poems in his closet. But the collected poems didn't bear that out.
Perhaps one of the most revolutionary aspects of his work, which has never been given its fair share of attention, is his calligraphic/illustrated holographs. Highgrade [1966], Monday in the Evening [1964], and The Diamond Noodle [1980] are limited examples of his notebook compositions, and they present tantalizing evidence of what might have been a fully developed enterprise of quasi-Eastern painting-poems, had anyone had the energy and money to do it. With the demise of the manual typewriter, and the advent of the personal computer, poets continue to be alienated from the means of textual production. Whalen's preoccupation with Eastern texts, and his own calligraphic practice (which he picked up, along with Snyder, at Reed College where Lloyd Reynolds was teaching it), are crucial interlocked components of his sense of the act of writing.
When I lived in Japan for a year in 1985, I had the opportunity to explore some of the same sources of inspiration that Whalen and Snyder had years earlier.  My next post will address some of that experience.

well! don't forget Severance Pay and Scenes of a Life

and lookee what I found:


The Invention of the Letter
http://www.stevesilberman.com/invention/

to me Philip Whalen was/is The Bonze...
thus title of my site
(Bare Bones Bonze)
is a bow in his direction

before The Collected Poems


...and notebooks
and pens/pencils
and typewriters

I think you should do the dozen posts. I hereby make the request.

Thank you for this Curtis.

Well, I did another.